As regular readers know, "Jaws" is an annual event at the KAMAD site. I probably watch the film two or three other times in the year, but when summer shows up, and the Fourth of July is on the horizon, I look for a big screen presentation of this family favorite film. It will be playing at the Egyptian on the holiday weekend, but we are traveling so that was out. Lucky for us, the L.A. Conservancy is hosting a screening at the historic Orpheum Theater in the "Downtown" area this evening and there are several bonus elements to be had. 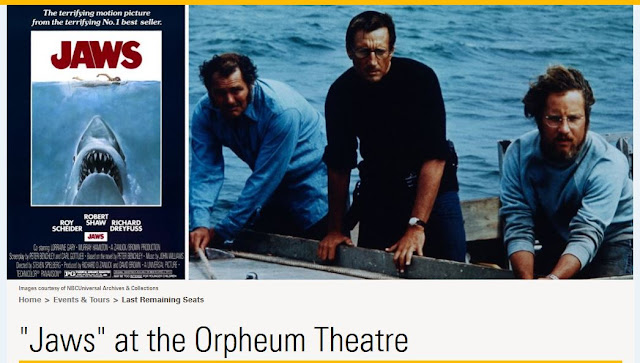 Two years ago, I went all out for the fortieth anniversary of the film, with four big screen visits in a ten day period.You an access those posts, here, and here and here.  Sadly, there will just be the one screening in a theater this year but it will be packed with goodies, including a rendition of the soundtrack of the film on a Mighty Wurlitzer Organ. 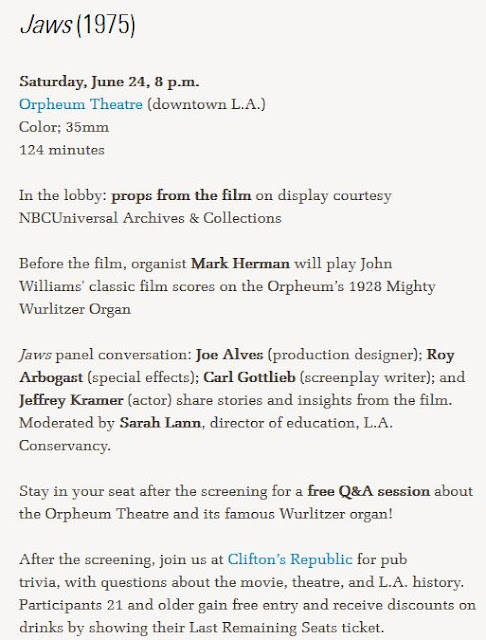 This was pretty much the same panel we saw at the L.A. Film Fest debut of "The Shark is Still Working" back in 2009. They told a couple of the same stories and once again gave credit to Bob Mattey, the creative consultant they remembered from "20,000 Leagues Under the Sea". It turns out that the fact they were pushed off the lot by higher priority effects for "The Hindenburg, Airplane 75 and Earthquake" gave them the opportunity to be more creative. Roy Arbogast was able to use new urethane products instead of latex and that made a big difference. 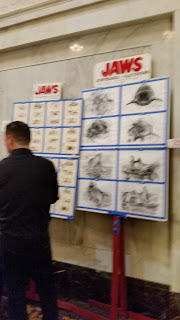 Joe Alves was on the project longer than anyone else. His production drawings had a huge impact on the look of the film, and even though they were not embraced by all the executives at Universal, the right guy found them to be very promising. Alves was on the movie before Spielberg was and later directed "Jaws 3D".

Carl Gottlieb showed once again why he was an important part of the crew. As the principle author of the screenplay, he helped build the beats in the story that keep it involving. Last night he did the same thing, contributing a comment or correction at just the right moment and almost always getting a laugh as he does so. He was in the lobby before and after the show, selling and signing copies of his book. I already have "The Jaws Log" signed, and you can read about it there. 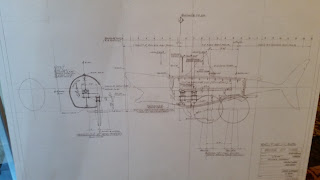 Jeffery Kramer is the actor who played Deputy Hendricks to Roy Scheider's Brody.  He does get elevated to Chief in Jaws 2. He has been a producer in television for a number of years, but the blogging community will all love the fact that he was also in "Clue".


The screening was part of the L.A. Conservancy program "Last Seats Remaining" , earlier in the day they did a screening of "E.T." so it was a Spielberg day at the Orpheum. A couple of months ago we went to a live  podcast  at the old United Artists Theater now known as the Theater at the Ace Hotel. It is just down a block from the Orpheum. There are eight or nine old movie palaces on Broadway, and a few of them have been restored and are used for special events and historical purposes. 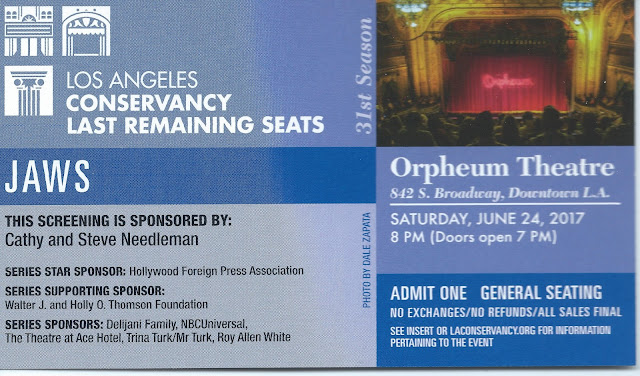 There was a beautiful flyer distributed to patrons, which explained a little about the conservancy but also listed the program. 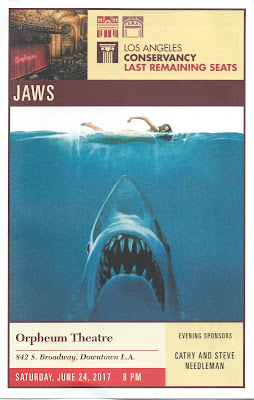 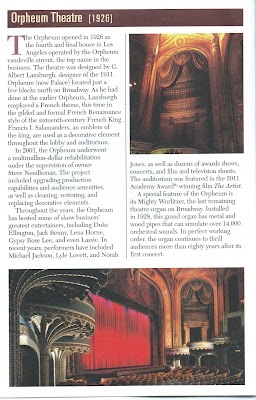 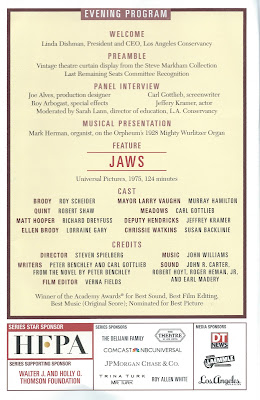 One of the biggest pleasures was seeing this film with a huge live audience in a classic movie palace.  These theaters put to shame the new multiplexes which are long on modern technology but often short on style. 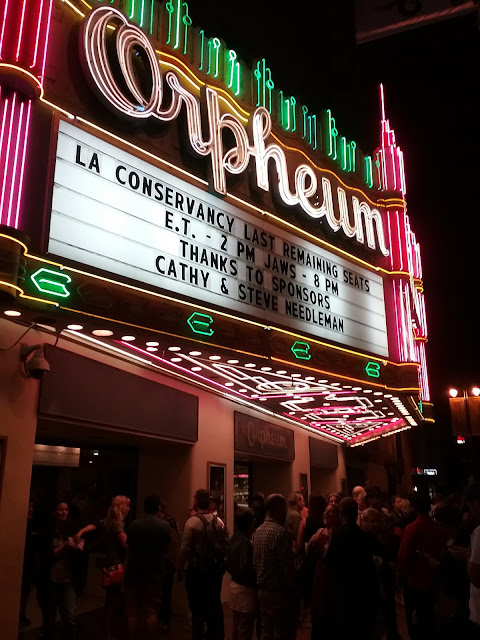 The fantastic neon accented marquee out front looks glorious at night, who would not want to go in and see way mysteries will be revealed beyond the door.
As was mentioned, the organist entertained for an hour before the program started, and while the whole Jaws Score was not presented, there were a number of John Williams pieces that were shared with the enthusiastic audience. 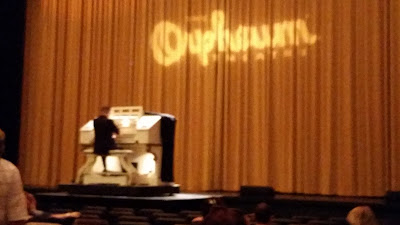 Steve Markham, a longtime member of the Conservancy, a WW2 veteran, and a collector, shared some of the beautiful backdrops he has. My Dad actually had two or three backdrops like this that he sold with the Thurston show. I did not take pictures last night but there is a nice video that includes several of the pieces we got a chance to see. 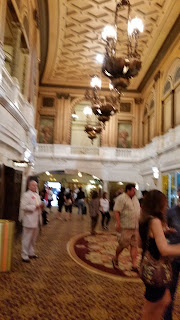 The theater itself has a magnificent lobby and there is a three level mezzanine to view it from. We might have been tempted to watch the film from the balcony or from the Opera Boxes on either sides, but getting up there would have been a little complicated for our group. There were bars on all the levels, including the lower level where generous lavatory facilities are located. There was also a lounge where one of the traditionally garbed ushers was answering questions for guests before the show had started. This is the kind of luxurious presentation of films that made movie going in the golden age of Hollywood a real special event. You did not simply see a film, you took your time soaking up the atmosphere, lingering over the opportunity to share a night out with other like minded patrons. The theaters were also used on the vaudeville circuit so live entertainment would also be on a program on a regular basis.

The world has changed, and maybe if we look around a bit more we will appreciate some of the things that have passed a bit more. 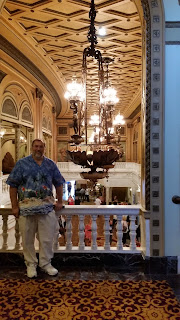 I've said it before, I miss the days when music filled the air before the show and then curtains parted to reveal the screen. I'd be happy to pay extra for these kinds of amenities if I could skip the half hour of commercials that precede most theatrical presentations these days. 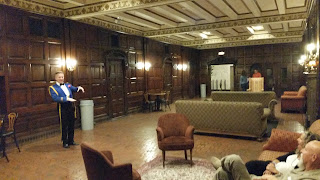 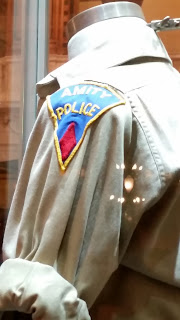 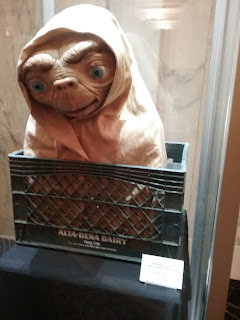 The props and costumes were not elaborate by any museum standard, but they were a nice bonus to the evening. The movie was a complete hit with the audience. It was great listening to 1500 people scream and laugh together. There was spontaneous applause after a number of scenes and once again, you could hear a pin drop as Quint tells us his story of survival on the U.S.S. Indianapolis. Robert Shaw has to be remembered forever for this five minute sequence.

The movie "Jaws" has mesmerized audiences for forty plus years, it is one of the great accomplishments of the cinema. If you think the effects are old fashioned, you need to watch the film with an audience. No one is longing for a CGI shark, we are all holding our breathe as the practical effects and live footage take us into the story. When you add in the surrounding environment to the experience, I can say we got one of the best presentations of the film in a theater ever. I know I have seen this film more than a dozen times on the big screen, and that is just in the last dozen years. This will be one viewing that will never get lost in my memory. 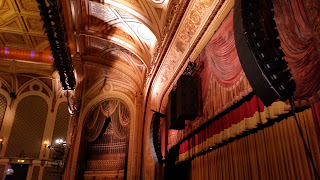 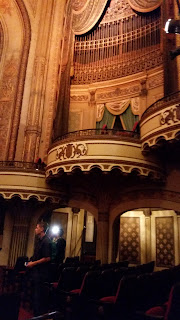 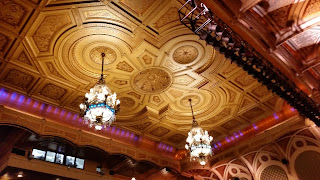 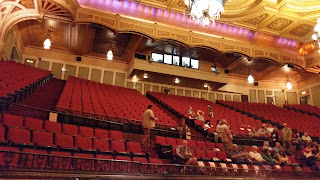 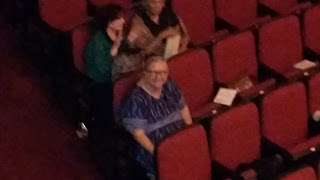 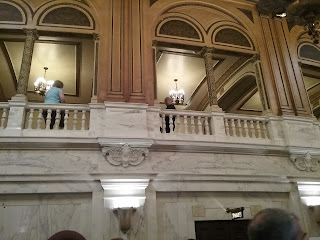 Posted by Richard Kirkham at 10:11 AM