Kubo and the Two Strings

I was really impressed with this amazing film. Laika has been responsible for some wonderful films in the last few years. From "Corpse Bride" to "Pananorman" tho only one I still have not seen is "Boxtrolls". This is a studio that when it comes to quality of production is second to none. They have a track record of artistic consistency to rival Pixar. What they have not had is the box office to match. It is especially sad when so many less worthy projects have taken the field and scored big time. "The Secret Life of Pets " was fine but not great. I have no idea how "Angry Birds" came out but I'm not hopeful. This movie however knocked my socks off and it is my hope that "Zootopia" and "Finding Dory" will be satisfied with their box office glory at the end of the year, but that the Academy will see the truth, "Kubo and the Two Strings" is a real achievement.

The painfully slow and delicate process of stop motion animation  is supplemented with digital artistry to make this movie smooth and polished. While older stop motion films sometimes look a little jerky or the flaws in clothing or facial impressions sneak by, you will not find anything like that here. The art direction is lush with Japanese landscapes that look as if they came from classic watercolors of old Japan. The character design is faithful to traditional styles of story in that culture. There are sequences so breath taking as to merit being watched all on their own, even if you are not going to see the whole film.

The only reason I can think that audiences here have not embraced it as much as it deserves to be is that it has that sensibility of Japanese magic stories that often feel so unworldly, that audiences are not sure how to take it. Kubo is a boy of nearly 11, who has an amazing gift for telling stories. It is a magical trait that he has received from his mother, who after crossing part of the ocean in a fierce storm that seems directed at her, brings the infant to a cave on a peak, that is solitary and overlooks that same ocean. Kubo has grown as a boy into a creative and responsible child, but his mother seems to be slipping away. She has filled him with stories, many of which feature his grandfather as a cold and harsh deity in the heavens.  She has warned him not to be outside of their hidden cave after dark, least her cruel sisters find him and take his one remaining eye for their father. So yeah, it is a dark fairy tale filled with the spirits of the dead and the night sky.

We don't ever get any explanation for why things are the way they are, we just have to accept them. That is a daunting task for a culture that is low context and so direct. What is really unusual though is that this film is an original as far as I can tell. It is not an ancient story from Japan nor is it based on a film from the Asian market. It is grown right here but feels organically Japanese. Another barrier might be that the story is complex and there are some dark elements to it, but not any darker than "The Lion King". Kubo's adventure takes him in search of a suit of Armour that had been pursued by his father before him. The curse his family is under involves him in conflict with monsters and the elements. The gifts that Kubo has however are companions with a secret and his own ingenuity. If you suspend your disbelief long enough to watch the magic come to life, the story issues will seem unimportant. We don't need a plot summary when the emotional climax of the film arrives, we need tissues.

If you miss this movie, you are missing one of the best films of the year, much less the best animated film of the year. I'm going to include a little extra for you to push you into seeing this. If you watch the music video below and are not intrigued by the film, I don't know what to say. It is a wonderful match of music to the theme of the film.

Get out of your house right now and go see this movie. 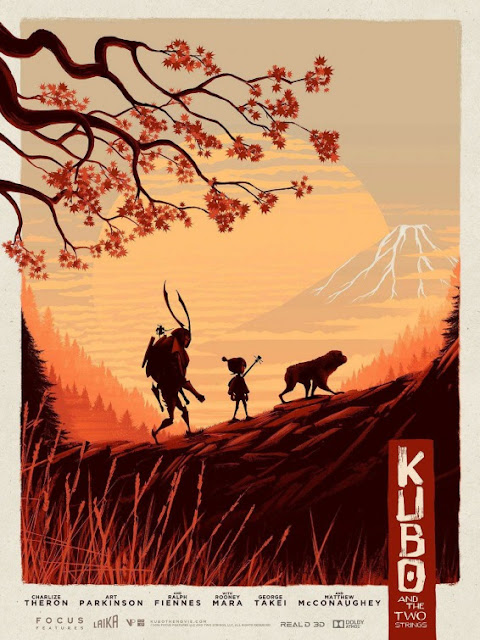 Posted by Richard Kirkham at 6:51 PM