Double O Countdown: The Spy Who Loved Me

"The Spy Who Loved Me" is Roger Moore's best work as James Bond. The series had some humor still but did not go off the deep end until the next picture. It reworks the concept of "You Only Live Twice" pitting the Soviets and Americans against each other, this time to destroy the world so that the undersea empire of Stromberg will survive. Three nuclear submarines end up in a supertanker that was the largest sound-stage of any movie studio ever. 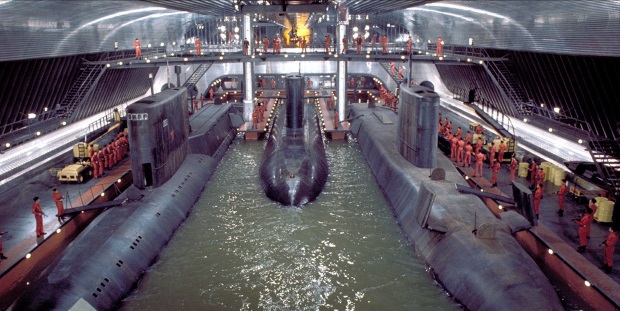 
A hired killer who stands over seven feet and has steel teeth that he uses to bite the carotid artery in his victims neck. Richard Kiel played the part in two Bond films, and despite the obvious rip-off of the name from a familiar film from a couple of summers earlier, he became iconic in his own right. 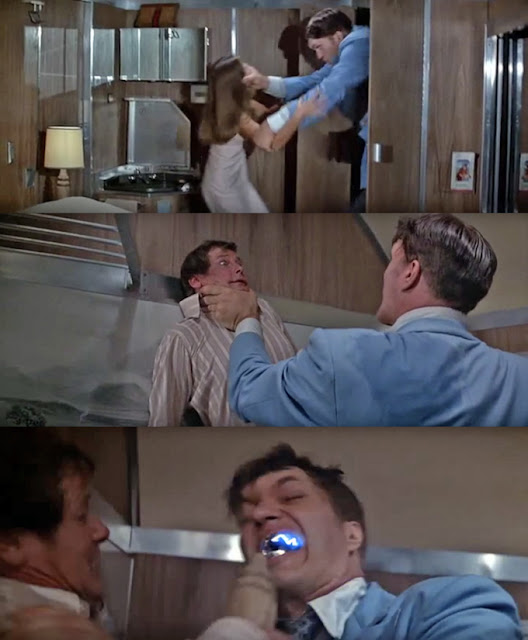 His hand is as big as Bonds head. That's pretty intimidating.


After the ejection seat of "Goldfinger" you might wonder what the Q branch would come up with for 007 to drive on assignment. Well, they out do themselves here, a high speed Lostus that doubles as a submersible,

A cool car and helicopter chase, ends with a plunge into the Corsican sea.

Caroline Munro, B movie Queen of the era, captains the helicopter.


This tune was all over the radio in the late seventies. Some people  (Fogs) even think it is the best Bond theme. It has a polish that makes the movie feel sophisticated even when it is occasionally silly.


Most people think of Roger Moore's James Bond as an avuncular,  dandy who never got his nails dirty. Here is a sequence in which Moore explodes that myth. After a fight in the rooftop of an Egyptian apartment, Jaws partner, Sandor, teeters on the brink of death, grasping Bond's tie to keep from toppling over. 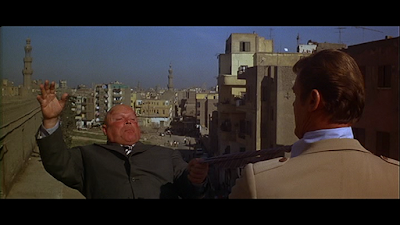 Bond questions him about the location of the arms merchant who has the submarine tracking tool for sale. As soon as he gets his answer, Bond flicks his tie.

Down goes the bad guy, another casualty of the spy game.

Than 007 casually straightens out his tie to look good for the rest of the afternoon. Cold, James, really cold.


Almost everyone will agree, this was a spectacular stunt. The unfurling of the Union Jack got a standing ovation at the Royal Premier of the film attended by Prince Charles. I'll stand up for our allies here as well. For Queen and Country James.


James Bond Will Return in: "Moonraker"

Posted by Richard Kirkham at 1:12 PM

This certainly is Roger Moore's best Bond, and up there with some of my favorite Bond movies - I find myself clutching my sides with laughter during every viewing, Moore's nonchalantly cold hearted antics never cease to entertain, and Jaws brims with personality even though he utters not a single word throughout the entire movie. Some of the camera work was nice as well; the crash-zoom to the expression of fear and bewilderment on the face of the completely random officer next to Bond as he disarms one of the nuclear bombs was priceless, and his fight with Sandor is quite nicely filmed, with longer takes and wide camera shots. This movie knew what it was and reveled in it, staying true to the character of Bond without wanking to either his sillyness or his overly hard-edged side. Minus some wooden acting here and there, this is great stuff.

Moore was at his best here, and you are right about Jaws, personality without any dialogue. There is humor but it rarely crosses the line into parody or slapstick. Just enough to have some fun.