Double O Countdown: A View to a Kill

Two out of three of the Roger Moore Bond films are on the bottom of my list of 007 cinematic adventures. I sometimes can't decide which is the more ridiculous, this film or "Moonraker". It doesn't matter much because it is still a James Bond film and we love even the ugliest of our kids. There are some things to like about this film, even though it was a sad end to the Roger Moore era.


James Bond films had a lot of impact on the 1960s pop culture. Spy shows were everywhere once the 007 films took off. One of the most inventive was the English show "The Avengers". Original female co star Honor Blackman appeared in "Goldfinger", even more prominent co-star Diana Rigg was Mrs. Bond for a brief amount of time. Eventually, John Steed joined them as a co-star in a Bond film.

Patrick McNee died earlier this year and I went to a screening of the Howling that was part of a tribute to him at the American Cinematique.


The villain Mayday kills an informant and is chased by Bond up the Eiffel Tower. She uses the same technique he did to escape from the Soviets in the opening of "The Spy Who Loved Me".

The stunt was authorized, but some of the crew who missed an opportunity to particpate did an unauthorized jump later that day and got fired from the show.

The film starts with an unrelated adventure at the North Pole. Bond has to escape on skies but loses them in the long pursuit. I've already said I'm a sucker for these snow scenes, this one takes a twist. After stealing a snowmobile and crashing it, Bond takes one of the runners and finds a new way to move across the frozen stuff. It was the first time most people saw a snowboard in use.

At one point, James gets some sick air.

004  Fisticuffs on the Golden Gate


The film features villain Max Zorin's dirigible headquarters.  In a scene stolen from "Goldfinger" one of the potential partners backs out of participating. He is dropped in the drink rather than given a drink as promised.

The high flying villain seems to have the upper-ground in any combat. When his plans falter he grabs the girl and Bond follows. The climax of the film is a fight on the Golden gate Bridge. Several actual locations were used to get a pretty impressive high altitude fight sequence. 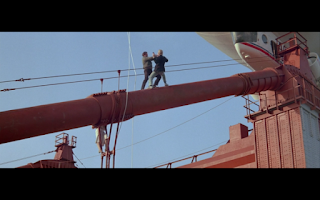 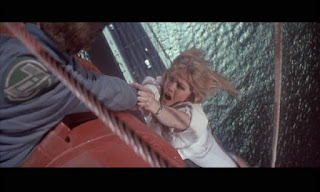 
Sometimes I think Walken was a failure as a Bond villain. He had no great lines and sometimes the plot called for capricious behavior. That's not his fault though, and when he flashes that creepy smile of his or displays his light on the feet dancing movements, he seems to be cast just right.

Big plans call for big gestures, and Walken is the ham who can deliver.

Max Zorin's retirement plan for his men is not one that they will appreciate.

Light on his feet, Fat Boy Slim's weapon of choice has him dancing into the fire with an axe on the Golden Gate Bridge. 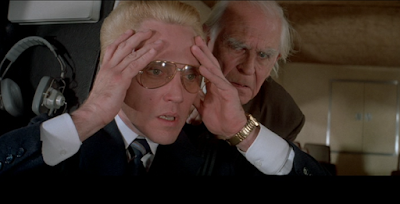 When things don't go as planned, make sure you exaggerate your weird facial expressions, that's why they hired you instead of Rutger Hauer.


Grace Jones could not act to save her life, but she had a fierce persona and a lean, muscular look that was just right for the mid 1980s. The tag line in the promotional material asked:

Mayday is Oddjob to Zorin's Goldfinger. A killing machine to be feared. 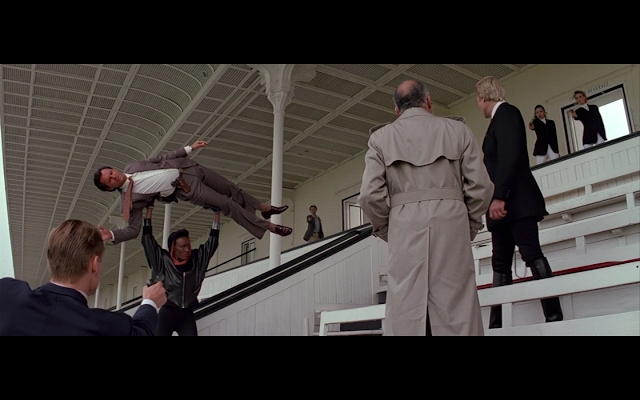 The Russians learn how dangerous she is before our hero does.

007  Once again the title song comes to the rescue.

The only  Bond song to reach Number one  in the U.S.


James Bond will Return in:
"The Living Daylights".
Posted by Richard Kirkham at 8:51 AM