This is one of those meta experiences that so often crop up in films these days. It is a film about spies that references James Bond, Jason Bourne and Jack Bauer, yet it engages in the same over the top story telling and effects that it is simultaneously lampooning. Having done the same thing to Fairy Tales with "Stardust" and Comic Books with "Kick Ass", director Matthew Vaughn now turns to a new genre with this hyper violent exercise in adrenaline based movies. Oh, and just so you know, he pulls it off brilliantly.

The opening credits will make you giggle with the use of exploding pieces of an ancient fort, blowing onto the screen to form the credit titles. All of this is scored with Dire Straights "Money for Nothing", yeah that's the way you do it. Colin Firth is is Harry Hart, codename Galahad, an agent of the privately organized intelligence and espionage agency that borrows from every cartoon spy film of the sixties and makes the idea of a gentleman spy come to life. Firth was once imagined as a James Bond replacement, and the fact that his boss "Arthur" is played by Michael Caine, the working class Bond of the Harry Palmer films, makes the whole thing even more delicious.

Newcomer Taron Egerton plays the hard knock, working class son of an earlier protege of Galahad, rough around the edges but ready to be polished. Early parts of the movie and recurring sequences focus on the recruitment and testing process of likely "Kingsman" material. As the job interview begins, a threat to the world by well meaning but crazy billionaire tech guru Valentine, sends the regular agents out in the field to investigate. Samuel Jackson plays a George Soros/Al Gore hybrid with a distinct lisp and an aversion to seeing the violence that he himself wants. As Hart crosses swords with Valentine, they engage in a parody of cliches from most spy movies of this variety. In their interactions they even discuss the Bond films that feature megalomaniac rich guys who play villain to the English spy, and they both play with those roles effectively.

If your liberal sensibilities are easily offended, you may want to stay away from this. Jackson's character is a rich genius with an evil plan to save the world from global warming. He attempts to recruit influential leaders and celebrities from around the world to be part of his new world order. Visualize the Socialist/Green/Celebrity Environmentalists as the dupes that will populate the Earth like Drax's genetic specimens in "Moonraker" or Stromberg's mermen in "The Spy Who Loved Me". This is the biggest drubbing of liberal sacred cows since "Team America". The Kingsman might seem reactionary to some, invoking as they do the names of Margaret Thatcher and Ronald Reagan. They even use a piece of equipment supposedly part of the loathed Strategic Defense Initiative [referred to as the Star Wars satellite system] to fight back against the plans of the villain.

Since Star Wars does get mentioned here, it is fun to note that a nearly unrecognizable Mark Hamill appears as a kidnapped scientist. Mark Strong, who has been in most of Vaughn's previous films, plays "Merlin" the aide de camp to the Kingsman.  There also seems to be a CGI version of an American Leader with prominent ears, who plays along with the scheme. At this point some audience members heads will explode, but hold on because that will not be the end of the fireworks. This movie also parodies the Westboro Baptist church crazies, the aristocrats of Great Britain, and dog lovers everywhere. Some of the humor is broad, such as the meal served by the suspected billionaire to the agent posing as another billionaire. It is either biting satire or great product placement.

The young leads get to take over the action at the end and they are just as effective as Firth was in his moments of glory ( or maybe I should say gory). This movie takes "Kick Ass" violence to new levels with some sick jokes mixed in. Imagine the damage a flying marital artist with razor sharp blades for feet can do, and then expect to see it on the screen. The slow mo, fast action styles explored in other films of this ilk are used here to good effect, but if you are over that approach, there are plenty of other bits of violence to delight you. 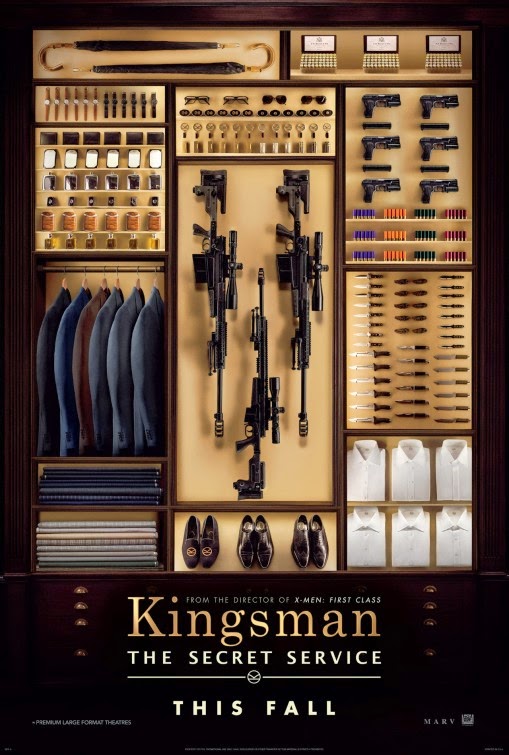 In all honesty, this is a movie that was genetically designed to tickle my funny bone and stimulate my adrenal glands. If "Kick Ass" and "James Bond" had a love child, this would be it. The film never takes itself too seriously but sometimes it plays with that idea as well. There is classic rock on the soundtrack, Colin Firth, Samuel Jackson and Michael Caine on the screen, and there is enough violence for ten movies. I was in love with this film when it was being hatched in the minds of the comic book artist who created the concept and the person who is responsible for putting Matthew Vaughn in charge. To quote Harry Hart: "Manners maketh man. Do you know what that means? Then let me teach you a lesson". I consider myself well schooled after seeing this.
Posted by Richard Kirkham at 3:17 PM