I have a vague notion of playing with Tinker Toys when I was a kid and I know my older brother had an Erector set that I envied because it had gears and motors and a lot of shiny metal pieces.  I never knew the joy of Legos as a kid . When I became a parent, I must have deliberately chosen to keep legos out of the house for fear of the mess and pain they might represent (stepping on a sharp plastic item, barefoot and in the dark was something I wanted to avoid). We did play with the Legos at the daycare or at the doctors office but there were never any sets or instructions, just building blocks. Sometime in the last twenty years, Legos marketing figured out that connecting with brand-name icons would move even more product for kids who wanted their toys to resemble their movies and TV shows. So characters and action figures became part of the Lego Universe and it has all lead to this, a movie about building blocks.

Way back in the early eighties I was listening to speeches that criticized half hour kids cartoons that were basically shilling for toys. You know, G.I. Joe, Masters of the Universe, and My Little Pony. All of those toys eventually had movies made out of them and if you judged by those films, you would know what my students were worried about, but if you started with this film, you would have no worries at all. This is a movie, featuring toys, that is less about selling a product and more about playing creatively. While you will never be able to see this film and not think of the product, you will certainly not think of it in the same way. This movie is anarchistic, colorful and somewhat demented. It is also funnier than most of the comedies that you see being advertised. I have not yet seen , nor am I likely to, "Ride Along", but the jokes in the trailers and ads for that have not made me smile once much less laugh out loud. "The Lego Movie" had me chuckling at the first trailer and seeing the film today, basically repeated the experience for ninety minutes. This movie is a kick and a contender for best animated feature in next years award lineups.

The story is a hero's quest featuring the "Legos" figures from most of the popular play sets and some that I'm sure were invented for the movie. There is a funky wizard modeled  after "Gandalf" but don't think it is Gandalf because he appears as himself briefly in one sequence. The ancient giver of wisdom is voiced by the marvelous Morgan Freeman, whose voice was delivered to us by the Gods. Backing up Freeman are the voices of dozens of well known movie and TV personalities, all cast for the unique qualities of their voices. I was listening to the voice of our hero, Emmet, and I confused it with the voice of Chris Parnell. Emmet's range is a little higher than Cyril Figus but they both have that plain, somewhat emasculated tone that makes them the vanilla of the cast of crazy vocal performances. The movie features voice acting from; Jonah Hill, Will Ferrell, Will Arnet, Will Forte, Shaquille O'Neil, Billy Dee Williams, Channing Tatum, Elizabeth Banks and a whole bunch more.  Drawing special mention along with Morgan Freeman, is the king of Winter badassery, Liam Neeson himself. I missed his work in "The Nut Job" a couple of weeks ago, but it seems that Mr. Neeson has been regularly employed because this is the second of three films he has coming out in January and February. His dual role here as "Good Cop"/"Bad Cop" is a jewel of comic vocal variety. Freeman and Neeson alone might have been worth the price of admission but there is also the visual spectacular to bring you in.

The city scapes, oceans, clouds and just about everything else is rendered in "lego" form. The effect is hypnotically amazing and very surreal at times. The space craft and cars and building, you sort of expect from the toys, but the backgrounds and scenery are also visualized as lego constructions and it give the movie an odd sense of "pop" art and engineering genius.  This movie is really well imagined and the look might be worth a 3D investment although I was happy with the traditional view that we experienced it through.

All the crazy visuals would be only interesting to look at for a short while. You need a story and some dialogue to go along with it. The plot is not especially surprising, although the idea of the alternate universes of "Legos" colliding is a fun and creative addition to the story process. The characters are realized in the most creative part of the film. The action figures talk like they would be the characters, as if they were being voiced by a creative child. Ferrell's President Business drops in an aside here and there to reveal his true colors in some most amusing comments. Will Arnet parodies both Bruce Wayne and Batman with a voice that is deep and dark and silly at the same time. It took a delicate mind to write some of these lines and not have them come off as loud and obvious at times. Pratt's timing in delivering the gee whiz cliches and oh oh jokes is just perfect. Although we do get sucker punched into more Will Ferrell than I would have preferred, in the end he does a good job as well, keeping his usual screaming persona to a minimum.

There are some serious attempts to make the movie a message about the faults of conformity, but to do so without kicking the kids that can actually follow directions in the teeth for doing so. The number one song in the "Lego" universe is a parody of upbeat dance infected pop that passes for entertainment these days, but it is also catchy as heck and like the pop music it is making fun of, it is very entertaining.
Listen to this clip to get a sense of what I mean: 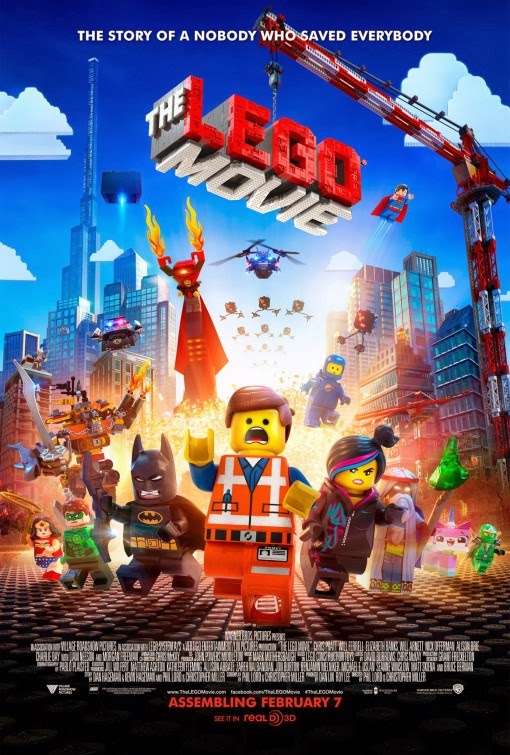 I would strongly recommend this film to adults and children. You will find plenty to enjoy, and a confusing set of messages that don't detract from the spirit of the film. It is hard to imagine that the one film made from a specific toy, that I liked was one about a toy that I know next to nothing about and would seem to be incredibly boring. It is the opposite of boring and it is a terrific way to build your weekend into a winner.
Posted by Richard Kirkham at 1:04 PM