If you don't like Quentin Tarantino films, you will definitely not like this. This is essentially a remix of movie ideas sampled, and arranged by Tarantino to please himself and his audience. There is excessive violence, clever dialogue, and a mix of original characters being brought to a boil by the master of classy trashy cinema. I have always counted myself among the legions of fans who look forward to the next Tarantino extravaganza. I enjoy repartee and tension and humor all being mixed together by someone who has an ear for interesting ways of speaking. From his very first film, scenes he has written and directed have crackled with verbal exchanges that are often on mundane topics but never sound dull. In "Django Unchained", that verbal fencing is contrasted by the juxtaposition of elegant and proper language as spoken by a German immigrant to whom English is not native, and the barely literate (oftentimes illiterate) grunting, shouting and sloppy native use of language by domestic speakers.

"Reservoir Dogs" and "Pu;p Fiction" were riffs on modern American gangster films. "Kill Bill 1 and 2" are pastiche kung fu cinema from the Asian markets of the 70s and 80s. "Inglorious Basterds" was a World War 2 adventure story told through revisionist history. It is therefore no surprise that "Django Unchained" represents the spaghetti westerns of the 60s crossed with the black exploitation films of the 70s. The unusual story being told is cloaked in many of the touchstones of those eras. There is the smart outsider, who manages to beat everyone he comes up against, usually people you are happy to see him outwit. There is the wronged individual seeking vengeance in a single minded fashion. Finally, Tarantino throws in the oppressed black man against the white establishment as a way of challenging the conventions that guide the thinking of mainstream audiences. All of this is done with a flare for dramatic changes in fortune and mixed with a music track that is not in keeping with the setting but is entirely evocative of our cinematic memory.

In praise of the film, I'll start with the music selections. Everybody knows that in addition to the shots and stories and characters he sponged up as a young man, Tarantino has an ear for music. He finds cues and passages and whole songs that reflect the mood he wants us to feel or the memory that we need to have in the back of our mind. Ennio Morricone compositions are not a major twist, after all, this is a spaghetti western. So when the Morricone cue shows up, those of us who, like Tarantino, grew up on Sergio Leone films, will smile as we see The Man With No Name crossing a desert or facing down a band of evil doers. I may have mentioned this in a recent post but It bears noting here; Johnny Cash lives! I hear his music being used in trailers and films constantly. The reason Cash is used so much is that his voice, and the themes of so many of his songs, immediately evoke the lonely oppression of a man by the forces of the world. The chained slaves in sparse clothing being exposed to the elements under harsh conditions is underlined by the sonorous notes of Cash's voice. "Django" also uses a pop hero of the early 70's to bring in the beatitudes and despair of those times. Jim Croce died when I was a sophomore in high school, and I remember crying when news of his plane crash spread across the campus. He was not the biggest pop star of the time, but he was on the threshold of greatness and he had a handful of big hits that everyone could enjoy. The theme song from the race car movie "The Last American Hero" was Croce's "Ive Got a Name". The melancholy tone with the defiant lyrics works just right in the scene it is used in for this film. It should not work, but Tarantino senses that it would and he goes with his instinct instead of his common sense. Then there are a series of more contemporary songs and riffs from rap and R & B, that fit the themes of the movie. I can't name them all but the work a lot more effectively than they did in "The Man with the Iron Fists" a couple of months ago. Their use was more judicious and well timed.

Tarantino has a stock company of actors that he takes full advantage of. Somewhere in time, Michael Parks and Don Johnson, imprinted on Quentin and they seem to be muses for his retro visions. Michael Bowen and Dennis Christopher are not names that most people will recognize, but Bowen has been in at least three previous Tarantino films. Christopher is a welcome note from a late seventies film that undoubtedly impressed Tarantino. Samuel Jackson was built to deliver lines that include the "N" word and the use of the phrase "Mother ......". The background cast is well matched for the white trash roles they are placed in. M.C. Gainey is always a welcome presence and around our house Walton Goggins is a star. As for the leads, they are all as expected excellent. Jamie Fox is not given much range, but he glowers like crazy and the physicality of the role fits him like the short jacket and suede hat he wears in the last third of the picture. Leonardo DiCaprio is new to the Tarantino world, but I suspect he will be back because he oozes reptilian Southern Charm with an effete but cruel manner that is reminiscent of Christoph Waltz performance in "Basterds". Waltz himself is partially transformed. He is more culturally enlightened, and morally complex than his character in the earlier movie, but comparing him to that standard is unfair. Most of the amusing dialogue in the film does once again stream from his lips, which makes him the most interesting of the characters although he is really a supporting character to Fox.

There are no scenes as dramatically tense as the farmhouse introduction in "Inglorious Basterds" or as insanely over the top tense as the basement bar scene. The truth is Tarantino shot his three way showdown wad in that scene in that basement. So instead of the "Good, the Bad and the Ugly" faceoff we got there, here we get a more standard confrontation between Waltz's Dr. Schultz and DiCaprio's plantation owner Candie. The violence that ensues here is every bit as brutal and more so as the WWII picture. There are some very clever moments of dialogue for Waltz as he resolves his taking of criminals for bounty. Fox gets a chance to mimic and enhance a Waltz scene from earlier in the film when it appears that he has been thoroughly defeated. I felt a little like the love story that motivates Fox was under developed but that the hate story between his Django and just about everybody else was well done. Slavery is treated as the abomination that it was, and the vicious nature of human beings is exposed in a very unflattering manner. Some things are hard to watch, and that may be a good thing because it reminds us that we are all just a couple of steps away from being primate animals. 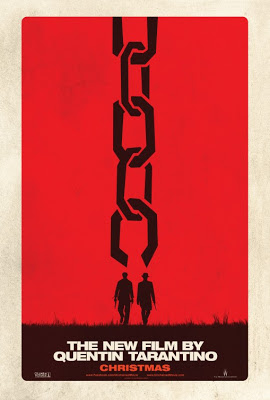 There are some sharp comedic bits in the film, and places where it hurts to laugh. There are also some simply silly moments of laughter, as evidenced by the trademark on top of Dr. Schultz wagon. The mixture of genres and tones by Tarantino has resulted in some calling him more of a DJ rather than a director. I can completely see that analogy. At the moment, "Django Unchained" ranks as a middling effort from my point of view. It never quite achieves the heights that "Inglorious Basterds" reached and it is not as obsessively referential as the "Kill Bill" movies were. All of his films would stand near the top of any list of entertaining movies, so to be in the middle of a very strong list is not something to be ashamed of. If you like Tarantino, you will like this. If he irritates you, this is not the film that will relieve you of that condition. I just hope he keeps turning out entertainment on a regular basis. We need film makers who want the audience to care about movies and be able to remember them.

Posted by Richard Kirkham at 4:34 PM