Since the earliest days of movies, stars have been fascinating to audiences. Fan magazines have been packed with pictures, stories and interviews featuring their favorite actors. In the Golden Age of Hollywood, those stories were carefully managed and negative info about the stars rarely made the headlines. There were occasional exceptions like the trials of Fatty Arbuckle and Errol Flynn, but for the most part, private lives were often kept private. We live in different times now a days. There is a 24 hour media cycle and everything ends up on line at some point. Tom Cruise has been maybe the biggest star in Hollywood films for most of the last thirty years, and his dirty laundry is often exhibited and speculated over. Frankly, I don't give a damn. His religious views, marriage, sex life are of no importance to me. I care about his films, their production development, business decisions and his performances in those movies. Everything else can pound sand as far as I'm concerned. Tom Cruise is a "MOVIE STAR" and he makes films that for the most part work.

After the debacle of "Rock of Ages", Cruise is back in familiar territory with Jack Reacher. This is a criminal procedural with a heavy action bent and a good measure of vengeance film thrown in. I have not read any of the books the movie is based on, but after seeing this I am very likely to become a fan. This is a great idea for a character. In essence, Reacher is a modern day Lone Ranger. He is an outsider with skills and a willingness to pursue justice, even if it means he has to go outside the lines to do so. This will allow the character to work in different scenarios, settings and with different casts of characters on a regular basis. I heard some of the criticism of his casting last year, Cruise being 5'7" and the character in the books being 6'5". As he has proven repeatedly in his career, Cruise is usually up to the challenge when it comes to physicality. His devotion to staying physically capable of doing these roles is obvious by his build and the lack of obvious aging in his face and body. I don't think he needed to loom over the other characters in this story to be intimidating.

The story gets a little convoluted at times. The ultimate source of the motivation is as out there as the pharmaceutical company conspiracy that turned out to be the motivation in "The Fugitive" twenty years ago. It's one of those "huh?" moments, that ultimately does not matter. We can follow how Reacher's character strung out the facts, looked at events and then made inferences. There is a lot more deductive reasoning in this movie than there was in the Robert Downey Jr., Sherlock Holmes films. The action in this movie also makes a lot more sense. There are a couple of very well staged fight sequences, and an excellent car chase scene. The car chase will remind anyone who saw films in the 70s of movies they probably loved as well. The chase is reminiscent of the car chase scenes in "Bullet", "The French Connection", and "The Seven Ups". I still have not caught up with "Drive" from last year, but I suspect it features some of the same kinds of real world stunts and a actor who looks believable behind the wheel. Cruise sells this character especially well when he drives that Chevelle SS though Pittsburgh, chasing down bad guys while simultaneously being chased by the cops.

As far as I'm concerned, now that Clint Eastwood is semi retired and Gene Hackman is permanently retired, there is no better actor on screen than Robert Duvall. He gets to put in a short appearance in this film, but he shows up at the right moments and leaves the exact kind of impression you want from a character such as he plays here. Rosamund Pike is a beautiful woman who plays intelligence very well in this part. While she does end up being the damsel in distress, before that happens she is a fierce character that Reacher plays against and she adds a good deal to the quality of the film. I think Richard Jenkins is one of the great character actors working today, but he needs more parts that take advantage of his gifts. His role in this film was not distinctive enough for him to be filling it. None of the bad guys gets much chance to make an impression. Werner Herzog, is creepy, but that is mostly the script and the makeup that sells this character. 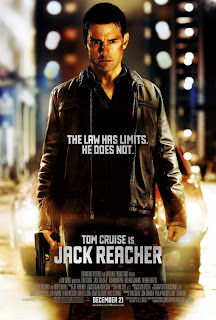 The backstory that Reacher tells concerning the original suspect in the crime is also chilling. There was one line that I thought introduced a bit of political bullshit into the film, but it had nothing to do with the story itself so I quickly forgot it. This is the film that will fill the action void until all the shoot em ups open in January. It is actually a pretty smart mystery, that introduces us to a unique new film character. I enjoyed the hell out of this film and I want to spend more time with Jack Reacher, especially if he is played by a professional like Tom Cruise. This looked like a pretty modestly produced film. There are not a bunch of special effects shots or big set pieces. We get good actors selling a solid story, that involves a good amount of physical brutality. That shouts "Merry Christmas" to me.

Can't wait to see it. Thanks for the review.

A very entertaining movie. Even though the location is a bit drubby,they should have used Miami. Tom's acting is very good,very to-the-point,no hanky panky with the defence lawyer and his human-handling is fast and precise. Can't wait for the second one.