Every year since I was first married, we have made it a point to go out after Christmas activities at home and see a movie. That first year, we went despite my parents protestations to see a movie at 10:00 at night. 1980's film was "First Family" a truly terrible comedy starring my favorite TV star Bob Newhart. Over the years our selection has been a bit more careful. Some of our holiday selections seemed to fit with the mood or spirit of the day; for example "Phantom of the Opera". Other choices flew in the face of the holiday, I guess a kind of counter programming, like "I Am Legend". Last year we saw the Spielberg film "War Horse" on Christmas Day, and it was a solid mixture of drama and hope for the holiday. Lat summer, when we saw the trailer for Les Misérables, and it proclaimed that it was opening on Christmas, it seems our fate was set. The haunting singing of Anne Hathaway in the piece provoke tears within the short time span of the promo. I have never made a secret of my sentimentality and this movie was tapping into it before I even knew what was happening.

I've never seen Les Misérables on stage. Although it has been a popular musical for nearly thirty years, it was not something that I sought out. I have seen the 1935 film version of the story, so I had a passing familiarity with the plot. Anyone who has watched TV or You Tube in the last few years has heard "I Dreamed A Dream", as it was the song that Susan Boyle sang that got her all that attention. It is a lovely song and it works for the film, but it is only one of maybe three songs from the film that seems complete. Having grown up on musicals made for films, I am used to songs having a beginning and an end and they occur in a context or story. It is true that "Phantom" uses the same sing through style as this film, I found that much easier to make sense of and enjoy. Way too often, the movement in the story here consists of people singing the script, without melody or chorus. Instead of finding it engaging, I found it off putting. My guess is that had I been more familiar with the music and the story, I would have embraced it more fully. I'm sad to say I'm not as enthusiastic as I would like to be.

The movie is shot (or at least it was presented in) an aspect ratio that feels a little cramped. It looked like a straight 1:85 framing, which is fairly standard, but is not typical of big screen films with sweeping backgrounds and soaring camera shots. There are so many close ups to allow the performers to connect with the songs that it literally gets right in your face with the melodramatic events taking place on screen. Hugh Jackman sings his heart out and his voice is strong and moving, but we get caught up looking in his eyes so often that other characters seem to be unnecessary in the scenes he is in. Hathaway is spectacular in voice and look. The tragic arc of her story seems so quick to me however that the fall has less of the emotional depth to it than I was expecting. Russel Crowe may not be a professional singer, but he acquitted himself admirably here, he was certainly not the embarrassment that Pierce Brosnan was in "Mama Mia" a couple of years ago. Crowe also gets the close up treatment, and in his case, the method seemed to work better because he was using his eyes more than his voice to convey the character's feelings.

The last third of the picture introduces a new story line and moves the characters we have been following to the background. These new characters never get much of a chance to develop, they are icons of "heroic student", "intellectually awakened rich boy", and "plucky but tragic street urchin". There is a love story that seems to develop almost entirely off screen, so that when characters act in a manner that suggests that their love is the only thing that matters, it is a little hard for me to go with. The one character that stands out is a conflicted romantic rival for Cossette, the little girl grown up and in love. Eponine is also a little girls grown up but she gets the big song in the last part of the film and while it does produce goosebumps, that is mostly due to the performance and not the story of her sacrifice.

I enjoyed the movie immensely, but I never felt the passion in the 2 hours and forty minutes watching it, that I felt in the minute and a half of the teaser trailer. That is an emotional letdown. The film is beautiful to look at, despite the often ugly parts of life it shows us. The performers are all top notch, and some of their voices deserve awards just for the sounds that they produced. More than any other musical of this sort, I felt the stage origins of the film. The key songs attempting to finish an act in a rousing way, the spotlight song for a featured performer, the scene and setting of events for dramatic effect all seemed to shout "THEATER" to me. I do enjoy the theatrical experience, but i wanted a more cinematic experience with this movie. I wanted to be taken into the story, and I wanted to care about the characters. I simply felt I was watching them go through the story, as performers rather than actors. It was a good film with some flaws that took me out of the experience. Maybe a second shot will improve my reaction to it, but for now, muted praise rather than glorious enthusiasm. 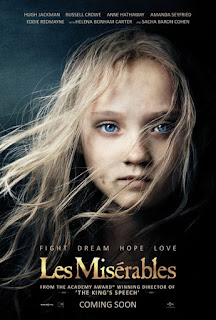 Posted by Richard Kirkham at 8:07 PM