Raiders of the Lost Ark - IMAX


There is not really any point in reviewing a film like this. Everyone knows how special it is and everyone has already seen it. So what is the point of posting on this, simple, I get to share my joy with others. (Oh, and I get to lord it over all of you who did not get a chance to experience this in the IMAX format). In the interests of full disclosure, I actually saw this today in one of AMC FauxMAX theaters. The sound and projection are amazing, and the screen is oversized, but it is not the seven to ten stories that I think a true IMAX theater should be. The problem was that our window was limited. The promotional posters go to the first five hundred at each theater, and Amanda, my daughter and frequent movie companion could only go to an A.M. screening today. So we swallowed our reservations and went to see a fantastic piece of cinema that remains for many, the high point of Steven Spielberg's career. 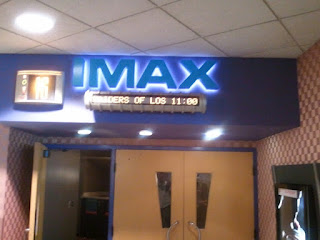 All of this is of course a week long commercial for the release of the Blu ray DVD next week. Last month there was a single screening of Jaws in Orange County in celebration of it's release on Blu Ray, and it irritates the hell out of me that I missed it. "Raiders" on the other hand will be on the IMAX screens all week, and next Saturday, they are playing all four Indiana Jones movies in a one day marathon. I don't think I will be able to make that, but believe me the Box set will be coming home that next week.

The movie looks terrific. I can't say what all the technical issues were that the studio addressed, but I don't think the movie ever looked as good as it did today. For those of you who may not realize it, I actually saw "Raiders of the Lost Ark" in it's original theatrical run, so although my memory is not perfect, at least I have a basis for making a comparison. The images were sharp and the colors clean and consistent. There was only one minor glitch that I noticed, that was some out of focus work on Satipo, the character played by Alfred Molina. When the spiders are discovered crawling all over him, there was a bit of blurring and loss of focus for just a few seconds. This might have been a technical issue in our screening, but I will be looking for it on the disc when it comes out.

Harrison Ford looked so incredibly young and rugged in the film today. Tom Selleck might have been fine, but the movie really thrives because of Ford's charisma. Karen Allen was so perfect in the tough girl, with glamorous potential role, it is great to remember that she was in many other terrific films as well. We re-watched "Animal House" the other day and she is so cute and sweet in that. John Rhys-Davies is actually very svelte in this film, it wasn't until "The Last Crusade" that he started playing "bigger"roles. The music from "Raiders" is among the many masterpieces of John Williams. Listening to it today, I was reminded how it was so powerfully evocative that it was used everywhere in the next few years. That sound was a touchstone for many and it set a template for action adventure films to follow. There are some truly beautiful passages as well as the swelling march that everyone recalls so clearly.

With the picture as sharp as it was, there were several places where my eye was drawn to set decoration that had whizzed past me before. At Indiana's house, as he and Marcus are discussing the upcoming endeavor, you can see at least three fantastic art deco style lamps in the living room. I was a Lawry's in Las Vegas on August 2, and I took this picture of the lamp on the mantle in the lobby: 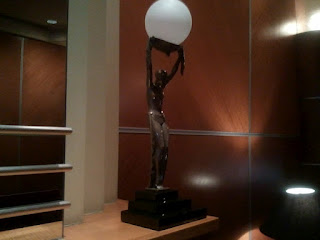 This looks like they took it from the Indy set and set it down in the waiting area. It is the same lamp.

In the cabin on the boat that Marion and Indy are taking to get the Ark out of Egypt, there are several other beautiful pieces as well. Every detail of the movie was very vivid. Even during action scenes, the clarity of the picture enhanced the experience. I actually see the bullet wound and explosion in the forehead of one of Toht's Nepalese henchmen. There were times I saw the movie before this, where I had only imagined what it must look like, here it was in goriuous red.

I will probably be traveling back again this weekend to visit all of these characters on the big screen one more time. When the girls were maybe nine and eleven, we took them down to the New Beverly in the Fairfax area of L.A., to see a double feature of Raiders and The Last Crusade. It was one of the experiences they both recall vividly from their childhoods. I can't imagine that anyone out there would want to deny their child a seminal moment like this. So get yourselves out there and enjoy. Marion says it best for me, "Indiana Jones, I always knew someday you'd come walking back through my door." 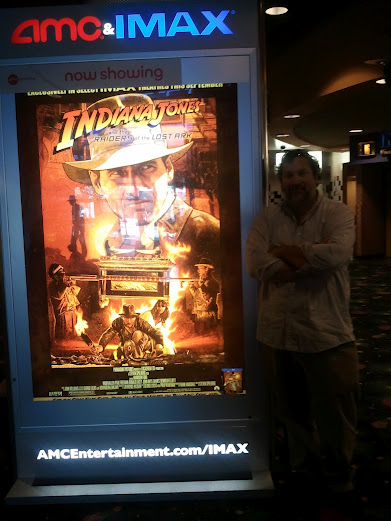 Posted by Richard Kirkham at 8:53 PM