House at the End of the Street

This was the lowest rated film opening this week on Rotten Tomatoes. I'm not sure why it is getting such low scores. It may be that the other movies opening this week at driving down the opinions on this film, or it may be that the haters think that since it is a PG 13 horror film, it has to suck. It was not at the top of my list to see either, but in the long run it would be unwise to think of this too much as a horror film. It has some horror elements and those were played up in the advertising, but for the most part it is a suspense thriller with another variation on on old theme.

Jennifer Lawrence is hot right now (OK she's just hot). After starring in an Academy Award nominated performance and having the lead in the newest breakout film series on the planet, she will be in demand and can have her pick of films for the next few years. I suspect she took this job before the potential fame banner was wrapped around her. It is a simple film that focuses primarily on characters and story. If you have a good enough story, the actors that have been cast will bring it home for you and Lawrence and her co-stars do bring it home. So if the movie is less than satisfying, people must have a problem with the screenplay. I'll get to that in a minute.

The two leads are young and appealing. Their romance is believable and it is not a problem that the star is attracted to the odd loner. Max Thierot looks familiar to me but I have not checked to see what else I might have seen him in. He has a hangdog expression and a winning manner. It comes over very reasonably that the sensitive new girl in town would be attracted to him. She sings a sweet song and he drops the information that he heard her singing it in a casual way. He seems so milquetoast at first that you might wonder if he really is the second lead. Lawrence plays a smart girl, and the part does not have some of the flaws of other movies of this ilk. She picks up on signals, and notices things that any of us would see in daily life. She is not a passive victim, but a clever and resourceful protagonist. No one is going to be screaming at her to not go in the house based on what her character has seen.

The other actors I thought carried off the script as well as they could. Elizabeth Shue, as the less than perfect but still very protective mother was well cast and hit the right notes. Once upon a time she would have been playing Lawrence's part so it was not difficult to see them as a parent and child at odds over their awkward relationship. Gil Bellows is an actor I remember from TV and he plays the slightly too low key police officer who comes into the lives of these three people. At times you suspect he may have something to do with the goings on, but his likability factor is high most of the time. As the voice of reason, he ends up being memorable in a fairly slight part. 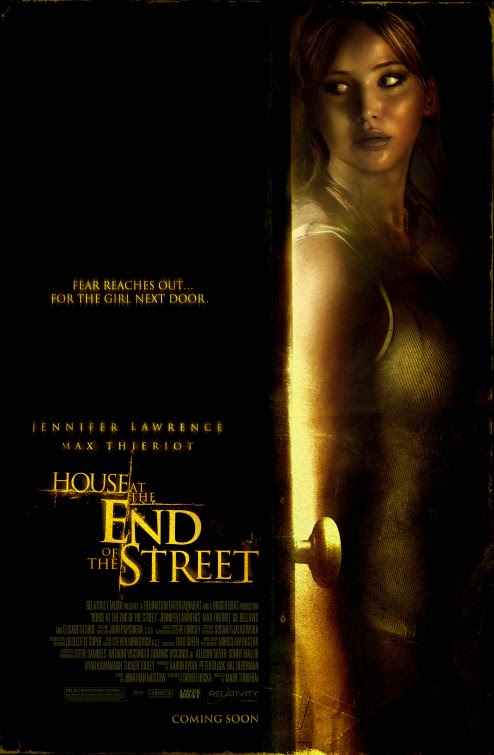 OK, the story is next. We have seen endless variations of slasher movies and creepy house films, so the fact there there is not as much suspense as there should be is less the fault of the movie than of the audience. We are in on it from the beginning. If you saw a trailer for the film, you know a couple of the plot twists that might have been more fun if we did not see them coming a mile away. The story takes it's time coming to the suspense elements, and I was almost hooked on the sympathetic Norman Bates vibe. The problem is that there are double twists and they confuse some revelations and they are not as well developed as they should be. I did think there was an effective use of flashbacks, but there are still unanswered elements of the plot that bug me a little at the end. The big climax in the house fulfills it's connect the dots vision, but makes the story less believable because of how a couple of things play out (Mom takes a knife and this is what happens?) The movie was competent, and the story for the most part is a nice turn on an old stool, but in the long run, the movie fails because it is not what you think it is going in. It is a well made, moderately budgeted suspense film with no real blood or on screen gore. The film makers tell a story, it's just a bit too familiar and the unique elements are not enough to lift it past adequacy.

Posted by Richard Kirkham at 1:51 PM

Jennifer Lawrence was terrific in A Winter's Bone and very good in The Hunger Games. And even as a straight female, I get that she's hot. ;-) This movie doesn't sound like my cup of tea, though.

If you are not interested in it going in, I don't think it's the kind of movie that will win you over. If you are a Lawrence completest you'll want to see it but there was nothing special about it.