If this is what you are looking for than this is what you are looking for. It meets all your expectations and satisfies the violence quotient you are jonesing for. There is a definite edge to the film that was lacking in the first big screen version of the story. Not being a fan of the comic that it is based on, I can't say how faithful they were to the story but it sure feels like the tone of the movie is in line with the no nonsense visualization that comes up here. The plot is straightforward, there are only a couple of twists and they occur within the confines of the story and don't scream "Hey we need to punch this up a bit".

Karl Urban plays the title character and it is a interesting performance because he never takes his helmet off. The Judges in  Mega city are all uniformed with armor and a head piece that hides the top half of their faces. It is never clear to me what the advantage of this is, but it was clear that Judge Dredd takes all of this very seriously. Since Urban has to perform with half a face, he needs to got the tone of the Judge right and make it work through action scenes and dialog. I thought he nailed it. There are not one liners or quips that make this character interesting, but his reaction and vocal tone speak volumes. He never plays a line for laughs, but there is sometimes a slight smirk and a odd pause that tells you the Judge just make a funny. Most of the time his world weary sigh is enough to tell you that the business end of his gun is about to do the rest of his speaking.

The only element of the movie that seemed like it might be a movie made plot point involves the rookie Judge that Dredd is evaluating. In the toxic irradiated world in which the story takes place, it appears that there are mutations. Most of these are not seen and when they are referred to, it is with a disparaging description of their lack of arms or legs. Judge Anderson however appears to have psychic abilities that raise her value despite a low set of  test scores. The psychic element also gives the female co-star the opportunity to skip wearing her helmet since it could interfere with her talent. In truth, this simply gives the actress, Olivia Thirby, the ability to play her part with a complete face. It's one thing to have a bunch of faceless hoods being dispatched in overwhelming numbers, but the audience needs some emotional connection to the main characters and if both of them remain anonymous that would be tough. The psychic ability plot line proves useful and it was not overly used but there were a couple of places where the rules regarding how it works were a bit inconsistent.

I have not been able to catch up with a movie out earlier this year, "Raid Redemption". I have heard that it has a very similar plot to this film and that there is also a lot of imaginative violence that drives it as an entertainment. I expect it will be right up my alley because the current film clearly was. Hundreds of gang members in a massive building are trying to wipe out the two judges. There is some technical mumbo jumbo used to make the battle remain between the gang and the judges without any outside assistance for the most part. This was another plot loophole toward the end of the film, and one of the twists that comes up, while not exactly a cheat, feels a little too pat. Still, this two against hundreds saga is filled with small scenarios that hold our attention. There is a nice use of the psychic skills to escape one situation, a technical trick to fix another, and finally there is the willingness of the minions to act recklessly, which allows our judges to be so efficient in dispensing justice.  In one extremely long outburst of violence, hundreds of bystanders are slaughtered in a pretty mechanical way. I appreciated that the glorification of violence was usually reserved for the wicked as they got their comeuppance.  If you are clearly as bad a person as I am, and take joy in the violent retribution that the criminal behavior brings, then you will want to see this in 3D. The viscera comes flying off the screen and splatters (metaphorically)  on the audience in abundance. It is shameful and base to take such delight in violent images such as these. So of course I loved the movie. Let's face it, this is an entertainment that derives its purpose from exploiting the violence. 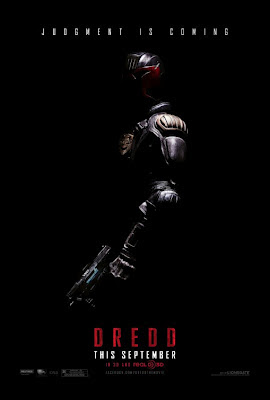 There have been other violent soaked orgies of cinema excess that I have not enjoyed despite their bloody visage. "Sin City" comes to mind. I am also unwilling to endure what some have called "torture porn". Movies in which the innocent are mutilated as often as the guilty, are harder for me to justify to my own sensibility. I need to care about someone in the movie for there to be a value to the vengeance. I cared about the two judges. The rookie represents an innocent who is looking for a life purpose in a world that otherwise has no use for her, and the veteran Dredd, is the silent figure of justice that is as close to an ideal as one can come to in the world created by the film. He goes by the rules and follows the code. Those that cross the line do so at their peril. It's nice to think that someone so single minded and violent is on the side of justice rather than a criminal. In many ways he is "Robocop" without the cyborg trappings, and "Robocop" is one of my favorite cinematic heroes. All you need to know going into this is whether the premise appeals to you. If it does, if violent action in pursuit of "justice" is your kind of movie, than get to a theater because this is your kind of movie.


Posted by Richard Kirkham at 4:47 PM

Your review made me rethink the film a bit more. I feel it's a very over-the-top, yet subtle approach and Karl Urban certainly nailed the titular character. I like how you mention that he never plays anything for laughs, but you know somewhere inside that dark, gritty exterior there has to be a twisted sense of humor.

Thanks for the comments. I really enjoyed this film. I like Urban's stoic and still entertaing performance, as well as all the blood.