Snow White and the Huntsman


A couple of weeks ago, I came across Ridley Scott's "Legend" and watched it for more than an hour. I've seen it dozens of times and have a very nice DVD copy that I hadn't got out for a few years. That movies' set design and art direction were ground breaking and the cinematography was truly special. Today, twenty seven years later, we can see the forest that has grown from that seed. Several sequences in "Snow White and the Huntsman" are set in enchanted forests that have both light and dark sides to them. Scott's accomplishment was done without the aid of computer generated images, so there are a few spots where the beauty is limited by necessity to some narrow sets that make up the forest. "Snow White" follows in the path of "Avatar", creating wide expanses of beauty and terror. The vivid images and creepy lighting will be the things that this movie is ultimately remembered for. "Snow White" is a demonstration by technical virtuosos on how to create an other worldly place but still keep it in the familiar.


Much of the story in this Snow White will be familiar. Snow White is an orphaned princess whose wicked step mother desires to be the most beautiful in the land. She flees for her life into the dark woods and is cared for by creatures and small men who once made their livings as miners. The huntsman that was sent to kill her spares her life and the witch of a Queen pursues Snow White. At this point, the resemblances to Disney are at an end. The dwarfs are not cute and charming, they are bitter and dangerous. The huntsman is haunted by the memory of a dead wife and is driven to act on desperation at his own depression. The Queen has an involved back story that might actually create some sympathy if she were anything but selfish. She is in fact an emotional doppelganger for Snow White herself. There is powerful magic that is largely unexplained but it puts the Queen and her evil brother in positions of power that look to be undefeatable. The set up of the movie prior to the appearance of the grown up Snow White takes a bit of time and introduces story elements that are new in this telling of the tale. The stakes are higher and there are battles and armies that will be effected by the outcome of the main plot line.


All of the leads are fine in their parts. Charlize Theron as the wicked queen is beautiful and bitchy. The relationship she has with her brother is vaguely incestuous although he appears to be perving over the young and ripening Snow White. It is a disturbing element that makes the story creepier but also a bit repellent. Some of her dialogue has to be over the top and out of control, it is a testament to Theron's skills that the character does not come off as laughable in those spots. Chris Helmsworth, fresh from his two appearances as Thor, continues to be well cast as the rough around the edges, physically imposing, near barbarian. He is easy to buy in the stalwart role of protector, but less convincing in the key emotional scenes. There are themes set up in this story that make it seem as if the film is only partially complete and most of that has to do with his character. We did get some character development on his role but the follow through is less than complete and he is required to act out of character in a couple of places just to add some drama to the proceedings. Kristen Stewart manages to make it through the movie without biting her lip constantly. She is a pretty young woman, but what needed to be emphasized more was not her appearance but rather that her heart is what makes her the fairest of them all. She has relatively few lines in comparison to the other leads, but she is the focus of the story and so it is appropriate that she has first billing.


There are three sets of peoples that Snow White encounters in the escape from the queen; the abandoned wives, the dwarfs and the outcast subjects of her father. Each of these groups receives the minimum amount of development to make the story work but because those strings are not followed very far, there is not as much emotional investment in what happens as there should be. Three actors that I would normally have recognized immediately, were hidden from me by the special effects that make them little people. Bob Hoskins, Ray Winstone and Toby Jones bring three of the dwarfs to life and add some spark to the movie that it needs in some other places. Ian Mcshane is also in the picture, but so many characters come in and out so quickly, I am not sure which character he played. One of the best ideas in the film is the notion that girls would mutilate their beauty to avoid being a victim of the Queen, but like a lot of things in the story, it goes by so quickly that the horror of the thought barely sinks in, it is another lost opportunity to make the movie something more than it is.


The ancient battle scenes are spectacular to look at but have little drama to them because most of the people involved feel anonymous to us. The opening battle sets the trap for Snow White's Father, and it is staged in a manner that makes it easy to follow. The final battle scenes involving an army of rebellious subjects storming the Queen's castle, is harder to follow and largely serves as a way to set up the final conflict between Snow White and the Queen. The final confrontation does pay off a piece of character development from earlier in the story, and it is one of the few places where there is follow through on an idea. The story needed more of that type of follow through. 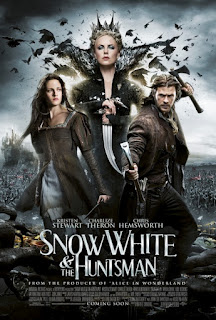 "Snow White and the Huntsman" is a handsome film with some spectacular visual designs to it. There are elements of a deeply emotional story which are set up but not as successful as they need to be to make anyone care. In many ways, this feels like a lot of summer entertainments; Big, Loud, great to look at, but a little hollow inside. This Snow White is done on a grand visual scale but a perfunctory emotional one.
Posted by Richard Kirkham at 6:20 PM