After the disappointment of last years Cars 2, Pixar comes back with a fresh story and a return to their high standards of movie making. "Brave" easily avoids the missteps of the last Pixar picture, and creates a series of instantly recognizable characters to populate the world that they are exploring in the new story. This is the first time that Pixar has strayed into traditional Disney territory. There is a story focusing on a Princess, there are enchantments gone wrong and witches and will-o-wisps and all sorts of anthropomorphic animals. In a twist, Disney's "Tangled",from a couple of years ago, is a much more free spirited and Pixar-like movie and "Brave" could much more easily sit on the shelf next to "Pocahontas", "Cinderella" or "Beauty and the Beast".

The movie is simply gorgeous from the start. Scotland as a setting give a wide latitude for scenery, including lakes and forest and mountains and snow covered peaks. These images are all lushly rendered with the attention that you would expect from the perfectionists at Pixar.  The movie was created for a 3D presentation, and we only saw it in a 2D format. There were a few spots where it seemed to me that the image was fuzzy because we were not using the polarized glasses. Most of these segments were establishing shots of canyons and landscapes that in a traditionally filmed movie would have been done with helicopters. In computer animation, it is hard to figure how this might go wrong and I think it is simply that the detail is so thick that if you are not seeing it in 3D it blends together a little faster than you would want. I only noticed this effect a couple of times in the movie, but instead of irritating me, I simply want to return and see it in the other format. The characters are also designed so that we can relate to them immediately. Merida, the heroine of the story, is easy to understand. She is a beloved first born of an impetuous King and his wiser wife. She has the fiery personality of any Scottish maiden combined with the stereotypes of red headed women. Her Mother and Father are voice by actors who we are familiar with, and convey the right attitude toward her within just a few seconds. Her young brothers do not speak but are clearly set up as impish offspring with fearless personalities and ultimately good hearts.

For the first act, we get a very traditional set up of royal family conflict. A teenage daughter chaffs under the expectations of her parents. Her fearless personality and great athletic skills dwarf the potential suitors that have arrived to make a politically expedient marriage. The vast majority of the first act is given away in early trailers, so anyone going in has a clear expectation about how the story is going to develop. Where things change in a pretty innovative manner is in the second act. In a moment of frustration she makes a deal with a witch that goes completely in a different direction than is traditional. This is not simply "The Little Mermaid" revisited.  I won't say how things turn out, but I will say that it all fits with what was set up in the first act and it creates a very emotional resolution at the end of the third act. I don't know that I was always satisfied with the turn of events. The "magic" element seemed to me to be something that needed a little more set up in that first act. I did not think there was anything wrong with it, but it felt somewhat abbreviated to me.

The best element of the movie is the heroine's  story arc. She is willful and headstrong and certainly has difficulty seeing her Mother's point of view. The way events unfold allow her to understand her Mother a lot more clearly and in a way that seems realistic. Merida never stops being who she is, but she does become something more than she was. In the third act there are moments of heroism and contrition. I thought the traditional race against the sun rise was cliched, but it still works every time.  There were some rather risque bits of visual humor and innuendo that might be a little over the edge for very small children, but I did not think any of it was offensive and most of it fit with the primitive Scottish setting that the story takes place in. The main conflict of selecting a spouse is handled in a different way than traditional Disney fare. There is no handsome prince that rises to the occasion and resolves things with a smile that turns our heroine's knees to jelly and finishes off the story. Instead we are left hanging on what may yet come. The path that brings us to that point is an honest one and I don't feel cheated by the ambiguity of the outcome. 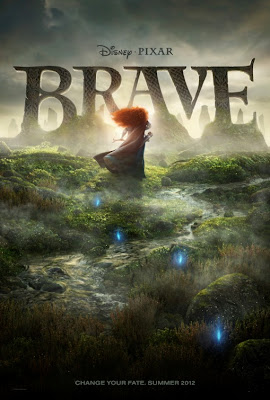 From a technical point of view the most is top notch. The story is well worn but has some major modifications to it that allow it to feel very distinctive. I think the Scottish setting added a good deal to the humor of the movie as well as the look. Once again, Pixar shows us how character and story are the keys to a good film. This film should have a broad audience, but I do fear the usual resistance of little boys to a story that features a girl at it's center. If Madagascar 3 ends up being more successful, be assured it it not due to quality but rather the fickle nature of an audience for films aimed at children. By the way, stick with the movie through the credits, there is a brief stinger which should get a good laugh and is worth the three minutes of your time to get to.

Brave is preceded by another fantastic Pixar short. It is a lesson in story telling using no dialogue at all. We understand the characters and their points of view and function simply by observing their actions and appearance. Within a five minute span, we are introduced to three character, a whimsical setting and a nice morality tale on individualism. I love that Disney and Pixar have committed to animated shorts being part of the movie going experience. It gives added value to the memory and the heart.
Posted by Richard Kirkham at 7:33 PM