When I first saw the poster for the movie, and then the trailer, I thought "The Grey" referred to the wolf that is tracking Liam Neeson throughout the movie. Having seen the film, I now feel the title is a bit more ambiguous, just as the color is somewhere between black and white, the subject here is really the middle ground between having a life or giving up on life. This is a man versus nature story, but it is not just an action flick. There is some thoughtful mediation on what makes us human and what life is worth in the long run. It sometimes runs into cliche, but it is never boring and at least the film makers were trying to say something while entertaining us.

At the center of the movie is the great Liam Neeson, an actor I first noticed way back in "Excalibur" in 1981. He has been known as a dramatic actor primarily for films like "Schindler's List" and "Michael Collins", but I know that he was always an action guy since he is Darkman. Three years ago in the movie "Taken", he laid claim to the mantle of action badass, and each January since then we have been rewarded with an action loaded film. This movie is solid and it also contains what may be Neeson's best work on screen. It is a physical role to be sure, but he gets many chances to show us what is in a man's heart and head as well as his hands. There is a scene early on, where he confronts a dying man, he does not coddle him, he does not lie to him, he tells the truth in a way that all people who respect life want us to feel. Later in the movie he gets a chance to back up his words with deeds, but that one quiet scene and his gentile and serious voice go a long way in showing us that the alpha is not necessarily the biggest bully but can be the one with the biggest heart.

In the 1970s, I saw Richard Harris as "A Man Called Horse" and as the "Man in the Wilderness". He was the king of determination against the elements back then. Neeson takes over this role and lives it to it's fullest. There are not huge surprises in the movie. Those of you who watch the trailer know that it basically pits a group of survivors of a plane crash, against a pack of wolves defending their territory. To complicate matters the battle takes place in the frozen wilderness of Alaska, so the threat of death does not come just from the lupine adversaries but the weather itself. Neeson's character doesn't know everything, but he has the common sense that others in the situation don't always show. He also has a strange determination to continue to fight because as we see early in the film, he is ambivalent about continuing to simply exist. None of the guys who survive the crash is a sniveling coward, but some of them have given up and some feel so frustrated by their circumstances that they become a pain in the ass. We don't get to know them as well as we could because the story keeps pushing us forward, and the small bits of character have to come from very brief moments.

The special effects are harrowing in the plane crash and creepy at night as the band is stalked by the pack. There are some pretty gruesome deaths, which make the story all the more frighting because they are rendered in a very realistic way. It almost makes you glad for those characters who are lost without the violence of having their throats ripped out by wolves. There are a couple of scenes in which man is pitted against man, but it never comes to a violent confrontation, just an emotional one. There is very little doubt that the stronger spirit here is the one that drives our involvement with the story. Each of the actors in the final group gets a chance to show what they are capable of as performers. I was impressed by the quiet work of Dallas Roberts and the more flamboyant performance of Frank Grillo. Both of these guys are supporting actors that should work more in more prominent roles. 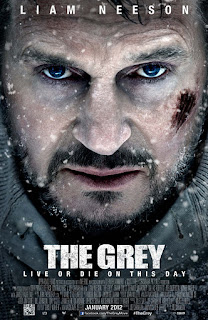 I don't know how everyone else will feel about the way the story goes. Looking back over the set up it seems the right resolution, but it may be confounding to many. The moral principles that crop up at times may seem like they are mocking the universe and God, but in the long run it is more complex than that. Each man's spirit is freed in a manner that befits the situation. Neeson, being the main character gets the strongest spiritual journey, and in the long run it is the one that is most satisfying. There is nothing of cliche in his actions, and the dilemma of "the grey" is resolved very effectively.
Posted by Richard Kirkham at 10:25 AM