Beauty and the Beast 3D

As I have made abundantly clear on multiple posts, I am a sentimentalist and a marshmallow. If a film moves me, I can take it to heart and love it forever. I did just that 21 years ago with Beauty and the Beast. This was the first animated film to be nominated for Best Picture by the Academy Awards, and that was in the days that limited nominations to 5 and there was no animated category for  feature length films. "Silence of the Lambs" won that year, but "J.F.K." and "Bugsy" were also up, imagine that for a collection of diverse films. I am not reducing any of my love for the great Johnathan Demme film, but I thought "Beauty and the Beast" was the Best Picture of 1991.

Today, it was re-released for probably the third time but for the first time in a 3-D format. I am really conflicted about 3-D, most of the time it is unnecessary and  it makes it difficult to enjoy a picture because projection lights just do not seem to be strong enough. Sometimes, the original use of 3-D in a movie, adds an element to the film that makes it really different and enjoyable. Films that are re-engineered as 3-D films raise my natural suspicions. That said, the Disney folks have found a way to keep marketing their films to theaters, despite availability on home video, and 3-D is boosting the reason to see some of those truly great films again. Last year we got "The Lion King" and now Beauty.

To be honest, the movies depth of color and beautiful painted backgrounds often made it seem like a 3-D film, even in 1991. The first shot of the castle through the trees as the image moves through a forest and over a brook was stunning in regular 2-D. It was even more amazing in the third dimension. As Belle wanders the castle and encounters statues and relief paintings, they make the eyes pop with dramatic image response. Gaston's trophy room looks even more ridiculous with a third dimension to all of his antler decorating. That is the main benefit of the 3-D treatment here, the background impress even more than they originally did. The action and characters are not enhanced much by the converstion but that is quibbling, it is still a delight to sit through.

My kids were five and three when we first saw this film. My oldest cried out during the scene where the villagers were on their way to storm the Beast's castle. She sobbed inconsolably in my lap and I was embarrassed but also proud that she could so freely respond to the emotions in the film. Today, just as 21 years ago, we went as a family and all of us had moist eyes at the end of the screening. I know this is a commercial for the video release of the film in just a couple of weeks, but I have been known to cry at commercials as well so I don't feel too self conscious. When people complain that it is simply rehashing the past and that Hollywood has run out of creativity when it starts mutating older films for re-release, I have to ask if you have seen some of the dreck that has been foisted on us in the past five to ten years.

I was happy to plop down the extra price for the 3-D, even for a 10:30 a.m. showing, because what I was being sold was worth the price, even if it did not have a 3-D added element. Someday, when my lotto numbers come in, I will open a small four screen multiplex, and show movies that I want to see on the big screen again. Maybe I will be sitting there alone, but that will make it easier for me to shed a tear for how wonderful a movie can be and not be embarrassed in front of everyone else. 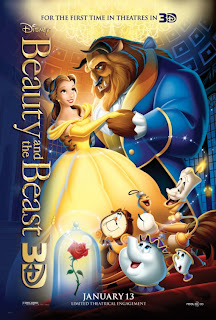