January is a dead time for new movies. Most films opening are wide releases of late debut Oscar bait. Then there is the annual Liam Neeson ass kicking movie, and finally there is product that is so dismal, it can't even be opened in September so they wait until January to dump it. This movie actually opened on Christmas day and then it died. It felt like a wake today because Amanda and I were the only people in the theater to see this screening. It actually was kinda nice, I did not have to ask anyone to turn off their phones and save the Facebook updates until after the movie. Counter programming is a strategy that can work if you have no other competition, but this movie has Sherlock Holmes, The Girl with the Dragon Tattoo and Mission Impossible to contend with for the action audience and it was not a contest.

This is your basic alien invasion movie, with horror touches. I had a student in class tonight named Yuri, who said he saw it at a midnight screening for the opening, in 3-D, he said it sucked. Of course he paid $16 to see it when he was probably tired, I paid $6 and saw it all before noon. I used this as an example in class tonight, in making a claim of future fact. Could I expect to make money investing $30 million for a sci-fi action film to open on a holiday among crowded competition ? My answer was no, I'd have waited and tried to open the week before the Liam Neeson movie. Action fans will want something to wet their appetite, and the other movies will be more played out by then. This is a high concept film with no stars, a limited budget and a downer theme opening at Christmas, someone did not make very strong inferences.

I found the movie perfectly satisfying for what it is. There is an interesting concept, a very effective special effect that gets used each time there is an alien attack, and the setting was somewhere that has not been seen a thousand times already in other movies (although Mission Impossible: Ghost Protocol, did just use the same setting for the opening sequences of it's story). There is nothing groundbreaking here, if you were to cross "Cloverfield" and "Independence Day", you would pretty much get this chase film set in a largely abandoned Moscow. There is enough suspense to keep you involved for an hour and a half, and the people are pretty as are the special effects.

There are four or five main characters, and then some come and go as the movie travels from one location to another. Not everyone makes it out of the scenerio that has been set up and that adds a little bit of credibility to the plot. Although if you think about it, you can probably predict who will survive and who will get wiped by the alien forces. I did like the fact that the American characters had to struggle because they did not speak Russian, and therefore they could not tell which broadcasts or what signs should be listened to. Each character gets a couple of minutes to shine, and even one character that we know to despise, gets a chance at redemption. I did like the courage theme that ran through the film. We all ask ourselves, "how would we cope in this situation?" Here we get a variation on the answers that seems to cover most of the possibilities. 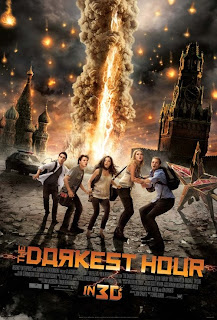 Emile Hirsh is the only name I recognized in the cast. Except for the four Americans, everyone else is Russian or Swedish so they are not household names. I thought Hirsh was the weakest performance of the cast, but he does have one good scene at the end where he is explaing his friendship with his buddy/business partner to one of the girls in the story. That was his most convincing segment in the movie. He also has some rousing moments in the closing of the film, but he is not really an action star. This movie is all about the concept. If you are not too discriminating on dialogue or character, and you like alien invasion movies, then you will be OK with The Darkest Hour. If I were you however, I'd go to the discount 2-D matinee instead of the mid-night 3-D screening.
Posted by Richard Kirkham at 10:36 PM