Frankly, this was the most entertaining movie I have seen in a while. It's not artistic, or deep. It lacks the elegance of some fine movies that I have seen in the last few months. But if you were to ask me to go with you to see this movie, I'd do it in a heartbeat because I had so much fun the first time. This is the Nazi Zombie movie about D-Day. If that thumbnail does not turn you on immediately, you are reading the wrong blog. This premise could have been done 40 years ago. That it is a current film is just coincidence. This is well made pulp horror, that scares you and takes it's time building tension and does so with energy.

"Overlord" starts as a typical WWII film, with the exception that black American soldiers are integrated into the combat units fighting the war, that just was not the case.  Otherwise, this is just a few men on a mission to destroy a radio tower that is crucial to the success of D-Day. Most of the Platoon is obliterated by anti-aircraft flak and German soldiers on the ground. The four who make it together to their destination include a milquetoast black private, a stereotypical wise guy, a photographer who is sort of in the way of the tough corporal who is the demolition expert and ends up as the leader of the team. The combat scenes are brutally realistic and there is some vivid sound editing in the film that will make the battles stand out. Of course it turns out there is more to the location than just the radio tower and that's when the horror really begins.

Like a lot of WWII films, this one manages to get a female into the story so it is not completely male-centric. That does not make this a feminist film by any stretch of the imagination but Chloe, the young woman in the story played by Mathilde Ollivier, turns out to be pretty tough and when she picks up a machine gun or flame thrower, you better watch out. Jovan Adepo, who was very good as Denzel's son in "Fences", shows a lot of range here as a mild mannered man, sent to war, who has to overcome not only the horrors of war but of the nightmare horror story this turns out to be. At first he believes that Corporal Ford as played by Wyatt Russell, may be the worst kind of monster. Soon he discovers that the SS officer in charge of the local area is barely a human at all. When things go south from there his expectations get shifted quite a bit. 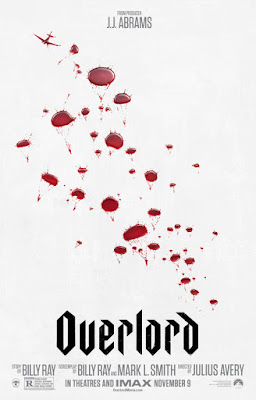 The less we see, the more unnerving things can be. That is typical in horror films, but there are also some things that need visualization. The practical effects and make up that are at the center of the story sell the horror factor much more than a lot of CGI blood would have. The fact that these are combat soldiers who are armed and capable, is a little like "Predator". Russell may not be Arnold, but his bad ass is in for some reversals that are pretty scary. In the end he turns out to be a righteous guy who sees the dangers of technology in the hands of men willing to use it. Don't worry, it's not a peace polemic, it is just an interesting aside.

This was just exactly the movie it sets out to be. There is violent war action and tense drama with the civilian population, and then things take a hard left into zombieland.  The music in the  score builds tension and it clearly is designed to turn that tension into scares. The cast is game, the editing is crisp, the visuals are solid and it all works. Maybe it is not a great film, but read the premise again. If it appeals to you at all, I think you will have a heck of a good time.
Posted by Richard Kirkham at 9:10 PM