Fantastic Beasts: The Crimes of Grindelwald

I need a safe house in Paris, because things have gone terribly wrong. J.K. Rowling has finally exhausted her creativity and has delivered the first vapid filler of the Wizarding World. "The Crimes of Grinelwald" could easily be called the "Exposition of Grindelwald". Almost nothing that happens in this film makes a difference in the narrative that is supposed to be coming. After the opening escape sequence, we get two hours of visual imagination signifying nothing.

Last week on the Lambcast, we covered all eight of the Harry Potter films. I was only on the second show covering the last four films, but if you listen, you will hear everyone at some point praising these movies for making the books come alive and entertaining us. I doubt that on tomorrow's Lambcast, anyone will be saying the same things about this movie. I fell asleep several times because nothing seemed to be going anywhere. Every time a new scene came up, it involved giving us backstory on a character we just met and who may very well be out of the story by the end of the movie. Halfway through the film I realized I had no idea what was happening and why. I think it's because nothing was happening and there was no reason.

Let me pick out two or three things that irritate me about the "story" and then I will try to find some things that I can complement. Jacob and Queenie were my two favorite things about "Fantastic Beasts and Where to Find Them",  in this movie, Jacob is wasted and has lost most of the charm that made his presence in the first film so refreshing. Queenie is completely misused, including having her character undermine the relationship that was so pleasing in the first film. If you get to the end of this movie and you think what happens to her makes sense, please post an explanation so the rest of us can figure it out. Was Katherine Waterson's "Tina" even in this movie. I don't recall any scene where she was essential. Her character appears and mostly stands around while other people explain things. She gets back to being an Aurour, but has the investigative ability of a Niffler. She can only see the shiny distraction in front of here and she lets her relationship with Newt turn sour for the stupidest reason imaginable. Newt Scamander is supposed to be the central hero, but Eddie Redmayne is so understated and boring in the film that he is an invitation to nap until something starts to happen (which it rarely does). Now I have a policy on this sight to not give spoilers and to avoid recapping the whole movie. The later of these two is easy today because I can't recall much of the story. As for the former, it is not much of a spoiler to say that Credence, the character from Fantastic Beasts who was responsible for the Obscurial is back. How? I don't know. Why? the same reason in the first film. What happens?, the exact opposite of what we saw in the first movie.  Again it makes no sense. 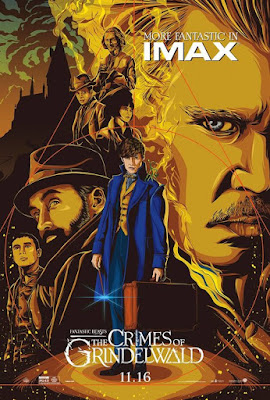 There are a wide variety of spectacular visual sequences in the movie. I thought the opening escape from custody by Johnny Depp's Grindelwald worked really well. The rally sequence at the end also looks solid. There are a few creatures that manage to get our attention as well, but none of them except the nifflers are really relevant to the plot and that is peripheral as well. Jude Law turns out to be perfect casting as a young Dumbledore but he mostly stays on the sidelines. It's not till we get to the end of the movie that we sort of learn why, and I guess that will be a plot thread for the next film.

Speaking of the end, there is a major issue with the climax of this film. In addition to one of the best characters in the first movie wandering off the reservation, we get a major piece of retconning. It is so unlikely, given the previous materials that if it turns out to be anything other than a convenient lie, I may have to reassess any desire I have to see subsequent film in this series. This is not a good film, and it is a major disappointment for fans of the Wizard World we have been visiting for the last seventeen years.
Posted by Richard Kirkham at 4:03 PM