While this is a movie blog, I have on occasion posted on concert events that are related to movies in some way. Today's post is just such an occasion. On Sunday I attended a performance by the L.A. Philharmonic of music featured in the films of Stanley Kubrick. The use of music in Kubrick films is a fascinating subject because unlike most film makers, after the midway point in his career, Kubrick largely abandoned the use of original orchestral music and integrated existing classical works into his films. Notoriously, for 2001 A Space Odyssey, the score composed by Alex North, a 15 time Academy Award nominee and a collaborator with Kubrick on the film "Spartacus" was not used. North had been shown about forty minutes of the movie on which to base his score. It was not until he watched the film in it's premier that he realized not a note of his composition was in the film.

Before the concert we attended a Upbeat Live talk by Bernardo Rondeau, one of the music curators for the soon to be opened Academy Museum of Motion Pictures. With his slides and historical citations, he led us through the evolution of Kubrick as a consumer of classical music and described some of the ways that he filmed to the music instead of trying to make the music fit the film. Famously, the waltz of the shuttle and the space station that opens the modern section of the picture uses the music of Johann Strauss to suggest a dance between celestial objects. It was a marriage of sight and sound that almost everyone agrees is a perfect fit.

The opening of the concert commenced with the tonal and ominous Atmospheres by Ligeti. This modern composer had been told that his music was used in the film in brief background sections but when he attended a screening, he took a stop watch and kept notes on how much of his music was used. That was one of the intriguing slides in the Upbeat Live Talk.

It is when the Richard Strauss "Also sprach Zarathustra" notes begin, over the MGM logo from that year, that the concert starts for real. Those notes and the combined visage of the moon, the earth and the Sun lining up produces the emotional power of these choices.

My hair literally stood on end. The impact of the live orchestra playing those notes in sync with the image on the screen was breathtaking and electric. 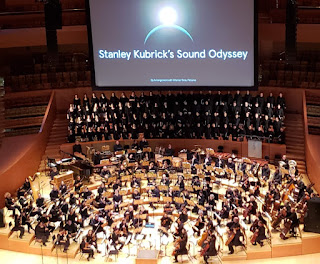 On the Lambcast we recorded on Sunday, I'd mentioned that I was going to this event and one of the guests made a joke that it would be funny if a chorus came out and hummed or grunted the music from the monolith. That sound is actually a Ligeti Requiem, and guys it was performed by the Los Angeles Master Chorale, during the film clip of the monolith on the moon. It was eerie as hell and simultaneously beautiful.

One thing I had not mentioned to my companions on the podcast was that the concert was to be hosted by actor Malcolm McDowell. The actor shared a number of insights and amusing anecdotes during the show. He added a special aura to the day which made the event feel so much more movie related.

The Bartok and Pendereki music from "The Shining" was suitably ominous and the sequence where Nicholson is coming through the doors with an ax, actually do have some score under them. The best use of the music however, was in the blood flood from the elevator and the chase through the outdoor hedge maze. Watching those clips with the music immediately made me want to go home and watch the whole movie again, with the volume extra high.

After the intermission. McDowell returned to share with us the fact that for the most part, the score for Kubrick's visual masterpiece "Barry Lyndon" was era appropriate. Handel, Schubert, Bach and Vivaldi all were played prominently throughout the picture. The harpsichord music was presented to us using an actual harpsichord and a variety of stringed instruments. It was an elegant sequence in the concert and it was one of the longer interludes of the day. 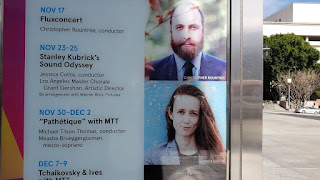 Our conductor for the afternoon was Jessica Cottis, an Australian/British citizen who is well known in the UK for her work with the Scottish BBC Orchestra. It may be old fashioned of me to note that she is one of only two or three female conductors I have seen in symphony venue like the LA Phil at Walt Disney Concert Hall, but she was engaging and authoritative with the orchestra.

"Eyes Wide Shut" was Kubricks last film and he makes use of one more Gregor Legeti piece as well as a selection from Shostakovitch. There were a couple of nude clips included in the film selection and the family next to us were apparently a little surprised that their nine year old son and eleven year old daughter were getting a sneak peek. There were warning signs as we entered the venue that the material in the films contained nudity and mature themes. So the kids were freaked out a bit by "The Shining" clips and Mom was embarrassed by the "Eyes Wide Shut" moments, but the best was yet to come.

Malcolm McDowell told several stories about the making of "Clockwork Orange", including the fact that Alex' getup in the film was mostly his own cricket regalia worn with the protective codpiece on the outside. He also related a story about encountering Gene Kelly at a Hollywood Party a couple of years after the movie was released and Kelly, upon recognizing him, walked in the opposite direction. McDowell said he had assumed Kelly was angry about the way "Singin' in the Rain" was used in the movie, as the expression of joy for the antithesis of Kelly's use of the song and performance. He then said that he had met Kelly's widow nearly forty years later at an Academy function and she said that Gene had no anger with him, he was pissed that he did not get paid for the use of the song by Stanley.

"Clockwork" features Rossini, Purcell, and of course Ludwig Van Beethoven. The Rossini music is used during the break in where Alex murders the woman at the health spa. He uses a piece of art that is a giant phallus balanced by some equally large testicles. The two kids roared out loud when they saw him pick this sculpture up. The climax of the film involves Alex having sex with a woman to the strains of Ode to Joy. It is an amazing juxtaposition of tune and image and one I'm sure will haunt the family seated next to us for years to come. 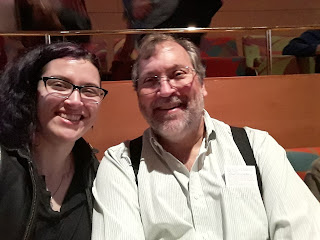 Posted by Richard Kirkham at 8:57 PM