Jumanji: Welcome to the Jungle

I hear people in the blogging community complaining about this film as if it is besmirching a classic film to do another version. Get off it people. The 1995 version was a perfectly acceptable piece of family entertainment for it's time. It featured elaborate early CGI and Robin Williams. There is a warm family story buried in the action adventure plot and all the good guys win and the villains are vanquished. Guess what, that is exactly the same scenario of this film, just take out Robin Williams and insert Dwayne Johnson, and you have the same outcome.

This concept is updated to reflect more modern sensibilities, so the board game is a computer game, and a transgendered Jack Black makes penis jokes, but none that can't keep the movie it's PG-13 rating. Basically the "Breakfast Club" travels to a different dimension and in addition to playing the game, they try to resolve social problems that they have in their "real" life as well. There are no big surprises here. Nothing shows up that you could not anticipate, but it is all carried off in an entertaining manner with a lot of humor and good old fashioned adventure story.

Two things that did standout a bit, and add a little something to the mix. The film is very self-aware when it comes to the sexual stereotyping that exists in a video game. It plays with that a little but not enough to be a polemic on the subject. I also appreciated that the teachers and Principal of the High School that the kids all attend, are not comic book figures for ridicule. They all have reasonable demands that they are making of their students and they are really trying to help the kids, even if the kids can't see it. 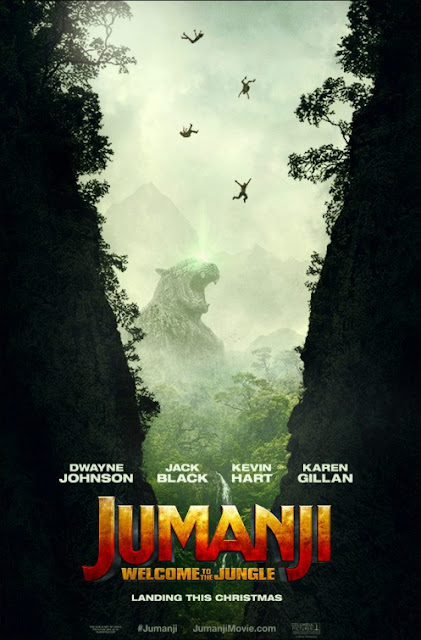 The cast here is all game for the film. "The Rock" continues to be a reliable presence in almost all films he appears in, even the bad ones. In this movie he gently mocks himself as a character but also plays the hero role well. Jack Black is hit or miss these days and a little goes a long way. I think he was well used as the avatar of the most self centered girl in the school, he is the complete visual opposite but manages to convey her personality in his performance. Maybe Karen Gillian works in the movie because she has done the video-game thing herself in earlier work. I have only known her from the "Guardians of the Galaxy" but she is apparently a Dr. Who video game fixture. This is a second pairing of Kevin Hart with Johnson, I think they should go ahead and repeat the tag line for "Central Intelligence" for this film. It would work.