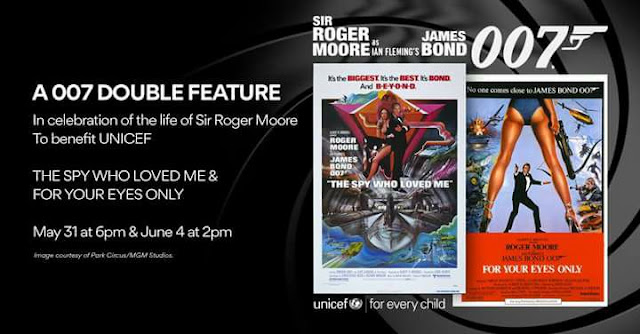 It was a sad day and a joyous day, all rolled into an afternoon in the cinema. Sir Roger Moore, who was the third  007 in the official series of films, passed away just over a week ago. As they did with Gene Wilder and Prince last year, AMC Theaters arranged nationwide screenings of some of his work as a salute to the star of seven James Bond adventures. People who do not understand the film business complained last year that AMC was cashing in on the deaths by selling tickets to the older films. The overhead for these special presentations and the screens that they have to give up to arrange them, will hardly cover the cost of putting this together. Maybe as a way of defraying these criticisms, whatever proceeds came from this presentation were donated to UNICEF, an organization that Roger Moore had served as an ambassador for several years.

For a generation behind me, Roger Moore was James Bond. He started making these films in the seventies and was the primary Bond of the 80s as well (no disrespect to Timothy Dalton). Gen-X had a suave, pretty and humorous Bond to admire. Moore was never the physical threat that Sean Connery was, but he had the fashion sense, snobbery, and tongue in cheek attitude necessary to carry the franchise through a transition period. The Bond films were solid money makers, but they were not the blockbusters that the mid-Connery era films were. Roger Moore stuck it out though two solid films, and in his third outing helped return the series to the heights it once had. Even though the films were big and successful, they became a little too silly to have the status of "classic".  "Moonraker" and "A View to a Kill" are fun entertainment but are also a bit embarrassing. There is however one Roger Moore Bond outing that qualifies for almost all 007 fanatics top ten list, and that is "The Spy Who Loved Me".

The two films chosen to represent Moore as James Bond in this tribute include that one, truly extraordinary 007 adventure, and then also his most serious outing, meant to restore the franchise to Earth after the shenanigans of the previous film. In an interesting choice, they actually played in reverse order for my double feature at least.

For Your Eyes Only


Fans of 007 who have read the books, will certainly appreciate the grounded nature of this entry. The story does not concern a megalomaniac trying to destroy the world, but rather a mercenary double agent who simply sees profit in selling out to the Soviets. It also includes bits and pieces of short stories and scenes from other Bond novels that had not been included in the films made of the original books.

As an illustration of the more serious tone of this story, Bond actually refrains from sleeping with the ingenue who seems to be a third his age. The romance angle that does get exploited concerns two grown women, neither of who look too young to find Roger Moore attractive. There is also a two pronged revenge story at the heart of the movie. The main Bond girl played by Carole Bouquet, is trying to kill those responsible for the murder of her parents. Bond himself pursues one of the villains in retribution for the killing of a friendly station head that Bond had trusted. We even forget the macguffian for most of the film as this pair of vengence stories plays out.

In one of my favorite scenes in a Roger Moore Bond film, 007 races up a series of staircases to outflank an escaping vehicle that has to use a switchbacked road to reach the top of a hill. As Bond shoots at the vehicle it slides off the road onto the edge of a cliff. As it barely clings to the top, the murderous assassin is trapped in the car. Bond walks up to the vehicle, reminds him of the agent that he murdered and then kicks the car in a cold blooded move, sending it tumbling down the side of the cliff to it's demise. It's a great moment for Moore to show he is not just a pretty boy playing at espionage.

Although the title song is solid, with Sheena Easton looking gorgeous in the background of silhouetted nudes in the title sequence, the rest of the score is a disappointment. I like Bill Conti but the electronic instrumentation in the first half of the film drains the action sequences of any tension. The music tightens up in the last third but by that point, some people may have tuned out. The film adds considerable charm when Topal shows up first as a suspect and then an ally of Bonds. There are two awful aspects to the film that you should be warned about, and neither of them is the fault of the lead actor. Bernard Lee, who had played "M" for almost twenty years, died as the movie was filming and the chief of staff of the Secret Service is thus filling in while "M" is on leave. The actor they cast and the direction he was given, create one of the least pleasant characters on the British side in all of the 007 films. For the stinger at the end of the movie, they simply could not resist the novelty that the head of state at the time was a woman, so a Thatcher doppelganger is used for a punchline.

The Spy Who Loved Me


Ian Fleming's least favorite of the books he himself wrote, is turned into a film that almost everyone will love. It has no connection whatever to the original story and uses the title to build the premise around. In the seventies, the Soviets were still an enemy, but the notion of British and Soviet intelligence working together provides an irresistible twist to the film. This film does feature a rich villain with plans to wipe out the population, but it is all the by-play between the two spies that provides most of the fireworks in the movie.

Roger Moore was at the peak of his physical attractiveness for this movie. He was a mature man who looked like he could engage in a fight, woo a woman and still look good in his clothes afterwards. 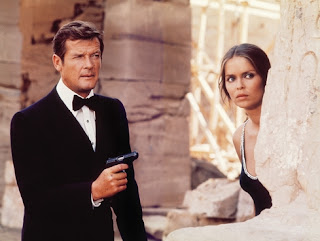 "The Spy Who Loved Me" celebrates it's 40th anniversary this year. It was a huge box office success and is probably best remembered for the title song, the villain "Jaws" and the parachute escape in the pre-title sequence. There is so much to recommend this film that you could put your finger down at any spot and have something good to say about that moment. The whole sequence in Egypt around the pyramids and ruins was beautiful to look at and nicely staged. The battle on the super tanker is a well put together action sequence. The chase sequences on the island of Sardinia were also excellent, and they feature the second best car 007 ever drove. A Lotus that doubles as a submarine. 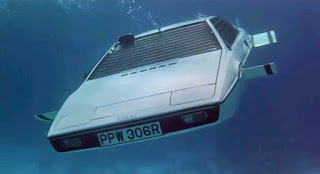 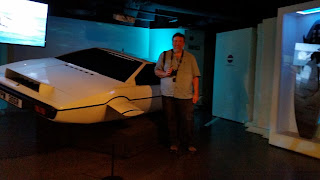 When I was in London a year ago, I added myself to the film legacy of the submersible car by posing for a picture with it in the Bond Exhibit at the national film Museum in London.

Moore has another great tough guy moment in the film when he flicks a hand off his necktie and sends a secondary bad guy to his doom by doing so. He then straightens the tie and makes a typical Moore quip.

He may not have been everybody's  favorite 007, but he made more of the official Bond films than anyone else. He is the first of our 007s to make the jump to the next great adventure and we should all miss him as a human being. Lucky for us, he had these two outing to leave us with the best of impressions.


For Your Eyes Only 007 Countdown


The Spy Who Loved Me 007 Countdown


The Spy Who Loved Me : Summer Movie Project

Posted by Richard Kirkham at 11:18 PM