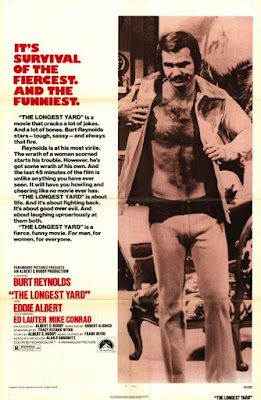 It's unfortunate that Burt Reynolds had to cancel on the Film Festival this year. I heard someone say there was an illness but I never saw an official explanation. He was scheduled to do one of the up close interviews and his would have made a great companion piece to run through the year to the Faye Dunnaway interview that did get done. The 80 year old star is an under rated actor in my view and he was a fixture on the film scene in the 1970s. Some fans of classic films might cut the date off for "Classics" nearly a decade earlier than this movie was released. I do see that it is a different era but I also have a broader version of the phrase "Classic Film".

Producer Albert S. Ruddy, who won the Academy Award for Best Picture with "The Godfather" and "Million Dollar Baby", did make it to the presentation and he puts forward a persuasive argument that this movie was substantially responsible for the wave of sports films that followed in the next few years. The underdog story is in fact a theme of this film but it turns out to be a lot deeper as well. I remember seeing this with my buddy Art Franz at the Garfield Theater in my home town of Alhambra. At the time it was the funniest adult style comedy I'd seen and it still holds up today. On my original project of Summer Movies from the 70s, my daughter wrote about this film for me while I was on a cruse to Alaska. It was nice to get to see it with her in a theater and watch her have the same kind of emotional reaction to the game as she described in her post almost six years ago.

Also appearing at the film was football legend Joe Kapp, the only player to have played in the Rose Bowl, Grey Cup, and Super Bowl. In the movie he plays the Walking Boss and definitely looks intimidating. His interview was a little awkward because he is nearly deaf and could not get the prompts from either Al Ruddy or the Sportswriter who was conducting the session. I did get a chance to shake hands and say hi to him outside the theater when we had gotten back in line for the next film of the day. He is 78 and not as on top of things as some are at that age but he was friendlier than all get out. 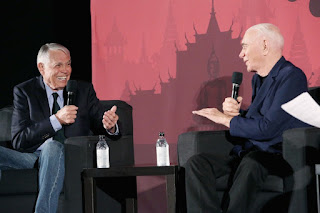 They finally got the story out about the local cops locking up much of the cast after a bar room altercation. It was interesting to hear that the prison guards in the movie were in jail one night before they were playing jailers themselves. When I listened to a podcast covering the festival recently, I heard that several more recent films that had been booked in the bigger venues were not drawing very well. This was effeminately one of those. It was a very moderate crowd, I suspect because the feature attraction was unable to make it. Listening to Albert Ruddy however made me glad that I came. He struck me as the kind of guy that Hollywood does not make anymore and that they really need more of.

Posted by Richard Kirkham at 11:08 PM