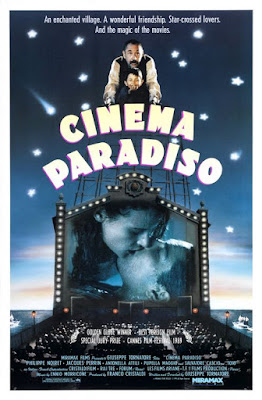 Movie lovers of all stripes should rejoice at an opportunity to see this ode to their own obsessions and especially on the big screen at the Chinese Theater.  This was the closing film of the festival and it was clearly chosen to celebrate the themes of the festival and the TCM Channel itself: Moving Pictures.  This sentimental story of a friendship between a little boy obsessed with the movies and the projectionist at the village theater, will surely bring one to tears if you let it wash over you without thought to anything more than the story and the feelings the film connects us with.

Cynics need not apply because this movie is manipulative as all heck, bit like a number of films shown at the festival, "A Tree Grows in Brooklyn", "It's a Wonderful Life", and "Rocky", it earns it's tears with characters and dialogue. It simply helps to come under the sway of it's spell to be an old movie weirdo. The last ten minutes of the film will evoke memories of our own passion for films and it will probably send you on a treasure hunt as well. You will have a strong desire to track down those movies that are referenced and enjoy them in their more complete form.

For the screening, actor Salvatore “Totò” Cascio, was present. He played the young boy who can't keep his mind on anything except the films playing at the theater in his Sicilian village. Almost forty now, he seems to have had a happy life trading on his role in the film and being beloved around the world. The translations were sometimes unnecessary because the laughter in his voice and the tone of his answers often said it all. 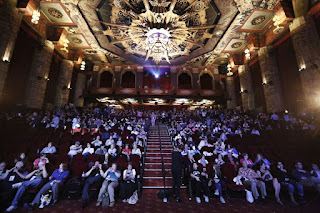 The Chinese theater is certainly more opulent than the Paradiso, with its benches and folding chairs. The magic of the projector, streaming images out of a lions head is captured almost the same as the image above. An audience is entranced by the wonders that take place in the dark.

Posted by Richard Kirkham at 4:28 PM