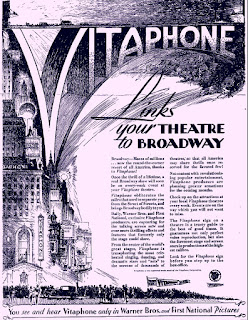 This was a wonderful program featuring 7 shorts from the start of the Vitaphone era, 1926-1931. I neglected to take notes and write down the names of each of the shorts, if you were there and have that list please share them here. I will try to remember a few of the performers featured in the program. 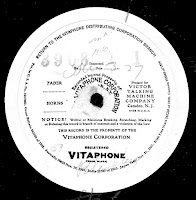 The Vitaphone process involved recording of sound to synchronize with pictures. The system as described by Ron Hutchinson, from The Vitaphone Project, used 16" discs that were powered by the same motor that drove the film projector. That way the synchronization would be much more effective than other systems had used. Mr. Hutchinson described how there are several hundred missing shorts. Some they have film for but no soundtrack and some they have the discs for but no film. The Project has about 150 complete shorts, so we saw a pretty solid selection of the groups work.

Most of the performers were vaudeville stars and they did their act for 10 minutes on a studio set so the material could be recorded. Since the act was designed to be on a stage in front of a live audience, there are not any optical effects and the staging is very basic. Also, since one of the studios of Vitaphone was in New York, they featured performers from the era that would be fairly specialized. Molly Picon for instance did a Yiddish humor presentation that involved two sets, a drawing room and an alley in a tenement building. That alley was the most elaborate staging I remember seeing. George Burns and Gracie Allen simply did their shtick in a drawing room set. Al Shaw and Sam Lee just stand in the same spot in "The Beau Brummels", and slay the audience with their understated mannerisms.

Baby Rose Marie, the Child Wonder belts out several songs with adult flair and brash confidence. I did not realize until I did some background research that this was the same Rose Marie that I knew from the Dick Van Dyke show. She was a hoot because that voice and charisma coming from a child was just so incongruous as to be shocking. It was a very entertaining few minutes.

There were two or three other performers that also entertained but their styles would probably be lost on most modern audiences. One woman sang in impressions of performers from the time, including Mae West and Fanny Brice. Another couple sang a duet while at a piano and all kinds of insanity takes place around them.

Ron Hutchinson's slide presentation to start the program provided an excellent historical context and was entertaining in it's own right.

When I looked at the Festival Gallery posted on the TCM Festival Web Site, I was surprised to  see that I made it into the portfolio. There is an audience shot of this presentation and there I am enjoying the experience from my seat. So here's a screen shot of that moment for you. 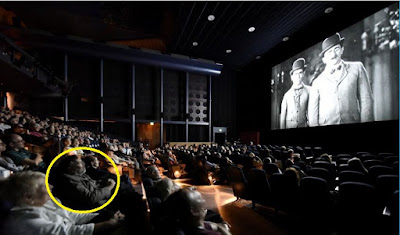 I also got to say Hello to my Facebook friend, blogger Will McKinley right after the program. we didn't speak for long but it's great to have a non-virtual moment with someone you know and admire.
Posted by Richard Kirkham at 12:13 PM