Having been a big fan of the original "Red Dawn" when it first came out, there was pretty much no need for me to go see this. The context of the original revolves around heightened tensions during the Cold War. While it was unlikely that conventional warfare would come to the U.S., at least the idea was plausible and the international situation provided a real sense of "what if?". The opening credits of this film do play upon a number of American vulnerabilities, mostly economic, and the continuing belligerence of the North Koreans. Of course most people know that when this movie was completed three years ago, the enemy in the film was China. Somewhere in the marketing department, it was decided that the Chinese as antagonists would limit the appeal of the movie in international markets. So, CGI and some re-shoots, render the Asian invaders Korean instead of Chinese. A scenario that is even less plausible and sort of shoots the "what if?' factor in the foot.

I won't spend too much time on the storytelling issues that undermine this movie. They tend to be glaring and it is not really the point of the movie. The original was a piece of rah-rah Americanism, at the height of Cold War paranoia during the 1980s. This version keeps the story in America, but moves it from the mid-west to the Spokane area. maybe the Koreans needed the lumber instead of the wheat fields, there is really no reason for this alteration or location. The idea of an insurgency against invaders, ought to have some dramatic parallels since the U.S. has been fighting such resistance in both Iraq and Afghanistan. The main character, a veteran of Iraq, has a couple of lines that deal with this but that is all. The original involved a conflicted Cuban Officer working with the Russians, in a reversed position. We spend almost no time in the enemy camp. There is no discussion of politics or strategy or history. Whether you likes the original John Milius script or not, it clearly had a point of view. This rendering has no point of view other than to stage action sequences. There is a hint of building an internal resistance but it is mostly just that, a hint. This movie is not interested in bigger ideas, it wants to make cool action scenes and develop a traditional set of romantic stories against this background. Blow stuff up and look cool doing so, that's it.

So how well do they do the action scenes and the blowing up of stuff? It is just competent enough to be satisfying from an action point of view, but it is not really memorable. There are a few ideas repeated from the original film, but it takes the "Wolverines" about ten minutes to go from scared teens to dedicated insurgents. They get access to equalizing explosives within a couple of minutes of their actually engaging the enemy, and then it is all, bang, bang, bang. The only attack that I can recall just a few hours after seeing the movie was the skateboard delivery system in one sequence. That one worked alright. The others were just part of the usual cacophony of background explosions. There are a couple of chase sequences that indulge in the dreaded shaky cam experience, thankfully those episodes are relatively brief. In the last quarter of the film, there is a traditional infiltration action sequence that was serviceable but again not memorable.

The 1984 version of "Red Dawn" was not a deep character study, but you at least knew who the characters were before they were sacrificed in the story. Here you get characters dying, but you barely have any idea of their existence prior to their death. There are two exceptions toward the end of the movie, but at that point it is really moot, we have been reduced to Cowboys and Indians in the backyard. The teens in the original had to fight the elements and were nearly starving. Here, they move in and out of town freely and I am not sure why they thrill to grabbing a whole bunch of food from Subway, except it was probably a product placement deal. The citizens of occupied Spokane are still going to fast food places, so why the "Wolverines" can't side up to a five dollar footlong is never really explained. The strategy of the invading Koreans is not explained, and the need for the secret communication system that resisted their own weapon is underdeveloped. The outside American forces are injected into the story, not as lost soldiers but rather, draftees sent on a mission. 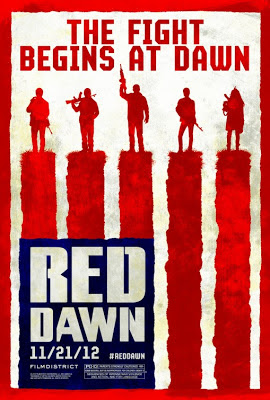 Chris Helmsworth has gone on to bigger and better films since this. He does however have the two best lines in the movie. One I won't repeat right here, it was a little crude (Although my wife thinks it would make a good bumper sticker). The other may be a real saying of our military personnel, but it was the first time I remember hearing it. As a Marine, visiting home when the invasion starts, he brings the locals a lot of knowhow. He also is free with the platitudes. The line that I am caring with me after this movie is pretty simple, "Marines don't die, they just go to hell and regroup". That's the best line in the movie, and if it is not enough to interest you in seeing this, then by all means skip it. There will be something else with explosions coming along to entertain you soon.

Posted by Richard Kirkham at 8:20 PM

"I won't spend too much time on the storytelling issues that undermine this movie." LOL. If you wanted to ceover 'em all, it'd take you all day :D

Glad you called out that Subway scene. That was the exact moment that I lost any remaining hope for this movie. LOL. It was that bad. :D

Not much to say about this except I checked it off my list and now can move on to better things.