Officially, my favorite phrase from the above preview is "Not Streaming August 13". I know that will not be popular with some people who because of their local restrictions or personal anxiety about Covid-19, are unable/willing to go to a theatrical presentation. I on the other hand want the Cinema platform to survive, and if the studios cannibalize their audience with day and date streaming, that experience will become the horseback riding weekend of the future. You know, people going retro for a few hours but doing so on very rare occasions. My second favorite line was "Fox Firesale" because this was a Fox film that Disney acquired when they purchased Fox and it has a specialty Label, "20th Century Studios" (let's see how long that lasts).
Repeatedly delayed, not because of quality but in trying to get to a date where the audience will show up, "Free Guy" is an absolute delight and for my money, one of the better pictures this year. I know it will go down like cotton candy or bubblegum flavored ice cream, but there is a little more to it than just the empty calories of CGI action fun and Ryan Reynold's arch humor. There is a moral question that the characters in this story face. It may seem far fetched to think so, but A.I. is all around us , and the future is here. This film is a bit like "Her" , only instead of worrying about the effect of A.I. on the human race, it turns it around and wonders what responsibility humans would have to an A.I. creation. It is much less grim than the Kubrick/Spielberg A.I., but some of those themes are present. At least enough so the movie is not just jokes about video games. "Ready Player One", "The Lego Movie" and "The Truman show, all have similar plot elements that mix reality with fantasy, and this film does it through the portal of  Massive Multiplayer Online Role Playing games like Grand Theft Auto.
I've said it before, I am not a comic book guy. So imagine how distant I am from the video game industry that now dwarfs my beloved film world. Most kids in the next generation will more quickly recognize characters form "Fortnite" than they will classic film characters. The last video based game I played was "Space Invaders" and that was a arcade version, I know next to nothing about the on-line gaming community, despite having a "Twitch" account. I do however know some of the routines from other mass culture and I did not really have a problem with most of the references. Several people appear on screen who I think are probably YouTube Gamer celebrities, This is another place where I can see my time as a member of the culture is limited.  I am sure there were some things that got by me because I am a newb, but I still enjoyed the film anyway.
Ryan Reynolds has cornered the market on sly, insider humor touched by both naivete and sadistic comic book violence. "Deadpool" is a character that he breathed life into after first sucking it out in an early form of the character.  He has also been the voice of gentle characters in animated movies and a sweet romantic partner in Rom-Coms. His voice and demeanor make the contrasting events feel more outsized without having to exaggerate every thing about the performance (ok, except for Deadpool). He has no writing credit on this film but he is a producer, and the film only moved forward when he got together with director Shawn Levy. The nice guy in the blue shirt is his persona to a tea. Hell, even when Deadpool is being a dick, he still speaks in mostly polite tones. I don't know Jodie Comer but I thought she was just great in the two roles that she plays. Taika Waititi was fun, but not his usual oddball self, I thought this part could have been done by any number of actors, they don't really get the best value out of having him in the film. Lil Rey Howery was funny as heck in "Get Out" and here he is funny with a little bit of heart.
Because we know from the beginning that we are watching a video game, the elaborate visuals will seem less impressive because they are merely being used as background for the story. It's a good looking movie, but I suspect it would be an above average looking video game, and the drama is lessened al little bit, even though the comedy is ramped up as a result. I will say this was one of the most enjoyable films I have seen in a theatre this year. It was a little deeper than I expected but it was also funnier than I had hoped. It worked out for me, my guess is that it will do the same for you. A completely satisfying dessert that also serves as the main course. 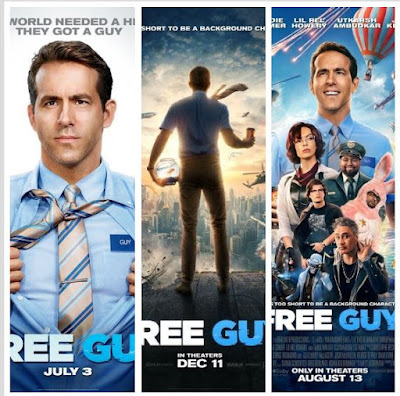 Posted by Richard Kirkham at 2:35 PM