What appears to be a fantasy adventure from the trailer above, is actually a slow moving meditative visual poem. That seems like it would be appropriate given the source material, but a theatrical film requires a few things to meet an audiences expectations. "The Green Knight" lacks those essential ingredients. That does not mean it is a worthless enterprise, but it will test the patience of most viewers and it will still frustrate those who are committed to experiencing it as it is meant by the director.
David Lowery has made three films I have reviewed on this site before: "Pete's Dragon", "A Ghost Story" and "The Old Man and the Gun". I found value in all three but not much entertainment in one of them, "A Ghost Story", unfortunately, that is the film in Lowery's catalogue that feels the most like "The Green Knight". Pacing is a legitamate tool for story telling. A slow burn toward an action scene or a pause for the irony of a joke to set in can make a film better. However, when the pace feels like a slog, and the audience begins to notice that the story is not moving so much as lumbering, pacing may defeat the film's ability to hold an audience's attention. I think that is the case here.
There are several scenes that are beautifully shot, but you start to notice the shot more than the story. One sequence in particular stood out for me. As Sir Gawain, Dev Patel's central character, encounters a group of giants, the film seems to stop merely to acknowledge the fact that we are seeing giants. They do not advance the plot and in fact, there is a moment of confusion as the only other character who accompanies Gawain on his whole journey, dissuades him from following up with the giants. We never discover why, and it is just another incident but not an event that happens on the journey to confront the Green Knight.
Patel is an interesting choice for the part of Gawain. I'm sure that somewhere there is a diversity driven audience that is pleased to see a person of color in this kind of film. There may have been a time when that seemed to be a breakthrough, but for me that time is long passed. The color of a character may be important in some stories, but in this and so many other films, why should it matter? To me, the question is whetehre the actor has the characteristics to sell us on the part they are playing. Patel is brash when he needs to be and subdued when it feels appropriate. The quality of humbleness, which is a characteristic of a knight is tested by the script rather than Patel's performance. It is easy to project onto his face the fear, confusion and dread that the audience must go through. The problems with the film have to do with things other than the casting and work of the actors.
Although the story has the components of a narrative heroes journey, it never feels that way. Each incident or event feels independent of the next. There are some call backs toward the end of the piece which try to tie some components of the story together, but it does not really succeed at doing so. There are several instances where the audience point of view is that of the protagonist, and then the perspective shifts and we get an outside view of events. This could also potentially be a time loop film since we are told the same story in two completely different ways on more than one occasion. Does Gawain need to die to meet his expectations? Is he a good man or a fallen one? How best confront your own doubts? The fact that the film asks the questions and then provides multiple answers instead of suggesting a single vision is infuriating at the end.
We had a good discussion of this film on the Lambcast and you can listen to it here: 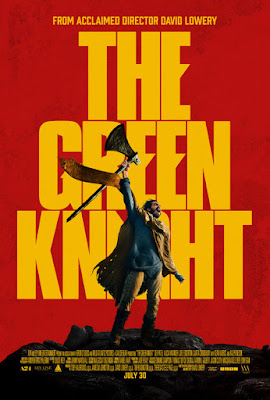 Posted by Richard Kirkham at 7:56 AM