Raya and the Last Dragon

In the last few weeks, I have revisited a number of animated films that I remember having a solid emotional connection to. "Ratatouille" works like the devil and it has an emotional wallop to it at the end. Pixar has thrived on the "Toy Story" films and manages to get us with them almost every time. "Moana" and "Tangled" worked for me very well. "Frozen" was a moderate success from my perspective whereas it's sequel is a disaster .  "Raya and the Last Dragon" is perfectly fine in a number of ways and I can heartily recommend it to animation fans, but I must acknowledge a reservation. I felt more detached from the film than I should have.
This is an original story, with a production design that pays homage to a culture that is under represented in American animated movies. Let me start by complementing the artistry of the backgrounds and the inventiveness of the landscapes and nations that are presented in the story. The people who populate each segment of the lost nation of Kumandra, look distinct enough for us to identify but also they look as if they can share a culture as well. We don't really get to spend much time in a couple of the segment nations that are labeled by the part of the dragon topography we see on the maps in the story. Fang, Heart, Spine, Tail and Talon each end up with a piece of critical gemstone that can be used to resist a mysterious plague that turns the living residents into stone. The mythology feels genuine for the cultures that the story is based on, even if they are invented.
Raya takes her place as a Disney Princess, and she is closer to Mulan than Elsa. This is a warrior who moves from being a little girl at the start of the film, to a woman on a crusade for the majority of the story. There is a turning point near the end of the film which feels completely appropriate given the set up of the story, so it should resonate well but for some reason it doesn't quite hit for me, and I can't really explain why. The character arc is right, the plot points lead us to this conclusion, and we have had a variety of character to relate to so we should feel invested. I just did not and that is a disappointment for me in spite of all the excellent work that the film makers did, apparently most of it from home under the pandemic rules. 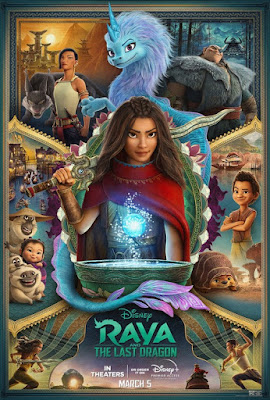 One of the major characters in the story is the Last Dragon of the title, Sisu, voiced by Awkwafina. Her take on the voice and characterization reminded me of Phyllis Diller and the animation style, while certainly in keeping with the production design, made this character feel a little too cartoon like. I enjoyed her attitude but in the context of the story it feels like some comic relief being imposed on the proceedings. There is also a baby character that seems designed for humor and heart but who also undermines some of the tone of the film. The character of Tong as the sole survivor of his nations populace was actually fun and tragic in the right proportions. Namaari is an antagonist that is also well thought out and the nickname she is given at one point is one that I will be adopting for my oldest daughter, Allison, get ready to be referred to as Princess Undercut.
This movie has everything going for it, and if I'd not seen every Disney/Pixar/Dreamworks/Fox film in the last thirty years, it probably would have worked for me a little better. Those of you with kids can safely assume they will be fine with this because it will probably feel fresh to them.
Posted by Richard Kirkham at 12:28 PM