Hallelujah, the drought is broken, at least for a bit.  It has been 87 days since I saw a movie in a theater, and it was driving me a little mad. I know others have sacrificed so much more than I in this pandemic, but I can only speak to my pain, and not going to the movies was incredibly painful to me. Sure, it's not like a disease, but ask anyone who gives up those things they love, it means something to them. Fortunately my addiction  is relatively innocuous so there was no physical danger, just mental anguish. How did this dam finally burst, especially since movie theaters are still not open? It's simple, there is an nearly outdated concept called a "Drive-In". It'e been twenty years since I went to a "Drive-In" theater, and that was for a special event for a local radio program at Halloween. It was twelve years prior to that when I last saw a regular feature at a drive-in. Yesterday, I saw a post while I happened to be on Facebook, and when I clicked the link, there was a trailer and information about where the movie was playing locally. That is if you think of 20 miles away as being local. I will get to the review in just a minute but a few more words about the Drive-In first.

The show was scheduled to start at 8:30 pm, so I left the house at 7:30, and arrived at the destination pretty much ten before 8. The line of cars was four lanes wide, and backed up a block. It took twenty-five minutes to pay and get into the screening area. This complex had four screens, every screen had a full lot under the social distancing rules of one empty space on each side. So they could only be at 1/3 of their capacity. The line for the bathroom was slow and longer than most lines at Disneyland. The concession stand was also a long line, so I skipped both. I missed having popcorn more than trying to relieve myself, fortunately I was not in need as many others were.

Okay, enough about the experience, let's talk about the movie. "Becky" is perfect Drive-In fare. It reminded me of some of the grindhouse style films that I did see in those venues when I was young and went to Drive-Ins regularly. It is a nasty piece of survival/revenge porn, that finds the most awful ideas, shows them to you, slathers on some blood, and then serves it up with enough inventiveness to make you cheer when the bad guys get their comeuppance. The premise is simple, a thirteen year old girl has to fight back against neo-Nazi escaped convicts. It is exploitation material, but it was not as lurid as many things you may have seen.

The cast features comedic actor  Joel McHale, best known for the TV series "Community" , in a straight dramatic part as the father of 13 year old Becky. The two of them have been struggling since the death of her Mother, and he is trying to move on to a new relationship but Becky is having none of it. They cross paths with the ruthless Dominick, an Aryan Brotherhood type who has lead a band of four escaped prisoners to the cabin of Becky and her dad, They are seeking a key, which turns out to be a McGuffin, simply used to bring the victims into the sights of the predators. Dominick is played by another comedic actor form TV, Kevin James. The two sitcom actors acquit themselves fairly well in the dramatic roles, though James gets the meatier part and has a chance to ham it up a little bit.

The star of the film is Lulu Wilson, who I did not know but I have seen in "The Haunting of Hill House" net series. The character of Becky is traumatized from the death of her Mom, she is in rage at the choices her father is making about her life and his own, and finally, she has reached puberty and at the age of 13 has all the resentment and anger that that stage in life often brings. When you couple that with the traumas she witnesses on this weekend visit to the family cabin, you can begin to believe she is capable of doing some of the things that the story has her executing. Imagine Kevin McCallister, only without the comedy and you will get the idea. A poke in the eye in this film does not result in three stooges guffaws, but rather dangling eyeballs that will have to be operated on with blunt instruments in the kitchen. Motorboating will not be a sex game played between a woman's breasts. Plowing the field is also not going to feel the same after witnessing this. Maybe the Joker can make a pencil disappear without all the blood, but Becky can get a lot of blood from pencils and especially a ruler. 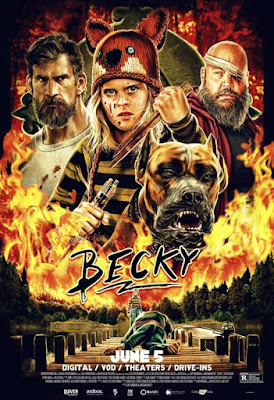 Sure there are a few things that don't make much sense. For instance, the movie starts like so many films do these days, at the epilogue instead of the beginning of the narration. We never know why the key is supposed to be in the house, or how Becky came to have it. It is also hard to believe that the little girl is strong enough to overcome at least some of the men in this film. The one sympathetic bad guy, played by wrestler turned actor Robert Maillet. Frankly, if I saw that guy coming for me, I'd lose it instantly, he is a monster. Surprisingly, he is a somewhat sympathetic character in the film. Ultimately, no one gets out of the scenario unscarred, and I guess that is the point. Well not really, the point is to take pleasure in the horrible things that happen to the horrible people. Some of the films playing on the other screens were comedies or Academy quality dramas. I was happy to be enjoying an exploitation film in its natural habitat. I almost felt like I was back in mine. Hopefully soon, but till then, all hail the drive in.
Posted by Richard Kirkham at 10:57 AM

I'm so ready to get back to the theater. Haven't seen one there since doing a double feature of "The Hunt" and "Bloodshot". I was planning on renting this one later this week.

Solid investment of 6 bucks and 90 minutes. I see AMC is planning a July return. Hope there will be some new stuff but I'd be happy to revisit old favorites.