Clint Eastwood is 89 years old, still working and still working at the top of his game. This slice of history as told through the perspective of the figure at the center of the controversy reminds us of the power of the government and the media to destroy lives. It is crafted meticulously as usual with projects from Mr. Eastwood, but it has the benefit of a great cast and a compelling story to drive it.


Elton John has been one of the most compelling and successful artists of the Rock era. His story is fascinating but even better than that it is told in a fascinating way. This is a real musical biopic and it features a performance from Taron Egerton that deserves some Awards consideration. He nails the musical performances as well as embodying the character of Elton. A very creative fim.


A very odd mix of shifting tones that manages to be inspiring, comic and tragic at the same time. Taika Waititi in one of our most creative new film makers. His sensibility may not be for everyone but if you can manage the sudden switch in moods you will be rewarded. It's hard to believe I was laughing at some of the things that happen in the movie one minute, and then drawing in my breath in shock the next.


The completion of the first major cycle of Marvel Comic book films and the payoff for the previous movie, this was the biggest film of the year at the box office. I was hesitant the first time I saw it, but it gets more meaningful on subsequent viewings and a three hour film  can't really turn into a four hour film. There are things I wished I saw more of, but what I saw was amazing and satisfying.


A true story about the ambitions of race car drivers, designers and the executives at a major manufacturer. It is full of insider intrigue, professional jealousy and competition and it tells the story of an historical moment in car racing in a way that even non-race fans like me could appreciate.  It also features two great performances from leads Matt Damon and Christian Bale. Directed by James Mangold who has made some of my favorite films in the last 15 years.


Let me put this in very simple terms, this is the movie I had the most fun with last year. I had no expectations, it is not a complex story, and the central character was one I was barely familiar with. What Happened? It just entertained the heck out of me. The juvenile performances were excellent but the lead performance by Zachary Levi was charming as all get out. I laughed, I cheered and I wanted to see it again the minute it was over. It's not rocket science, comic book movies should be fun.


Another new director, Greta Gerwig, provides a film worth seeing, despite the fact that it is the fourth  remake of a classic. She finds new things to say with the material and has a cast of young actors who make these familiar characters come alive once more. This film and the three theatrical versions are the subject of this weeks LAMBCAST.

#3  Once Upon a Time in Hollywood


A Quentin Tarantino film is inevitably going to be one of my most anticipated films of the year, and this film had me pumped well before it was released. As I was watching it, I felt a sense of disappointment at times. The usual passages of sparkling dialogue seemed to be missing. I think there are gems here but it is spread out more and instead of a nugget of gold in spots, we get a bed of gold visually and the dialog goes with that. I posted a second time on the film in a video form to address some concerns, but it is a terrific film that I like better and better.


A small film, set in Scotland about an aspiring country singer, "Wild Rose" stole my heart immediately. The music is the kind of country music that anyone can respond to, even those who think they don't like country music. It is also performed by the actress who stars in the film and she contributed to the song writing as well. Jessie Buckley gave the best performance I saw on film this year, and she will unfortunately not be on the list at Academy awards time, for no reason that I can fathom. You should she and listen to this beautiful film about self redemption. It will feel familiar, but it pushes those foundries by it's heart and performances. Up until the last week of the year it was my favorite.


The last film I saw in the year, was also the best film I saw in the year. "1917" is a technical marvel that puts the audience into the scenario being presented. It's not like some first person shooter video game, but the perspective is that of the two main characters and you feel like you are the third person on the mission. War is awful, but WWI looks particularly bad with the horrifying trench warfare that makes the deaths of so many even more grim and horrendous than the violence of a film like "Saving Private Ryan". Director Sam Mendes has produced a movie that is emotionally and technically spot on in every scene. 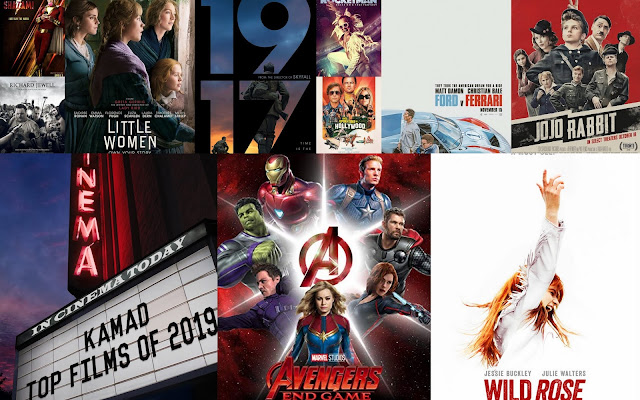 Posted by Richard Kirkham at 11:15 AM

So out Top 10 lists only share three choices. But I still haven't seen 1917. That changes tomorrow night. I can't wait.

We can add that overlap tomorrow.