The reason you wait till the end of the year to give your top films of the year is simple, movies like this. Here is a film that has a limited release merely to qualify for awards consideration. It is currently playing in just 11 theaters across the country. It is however getting a major push from the studio, including TV advertising, to build for a wide release in January. That will attempt to capitalize on the critical response and word of mouth developed in the narrow window currently in place. It should work for some pretty basic reasons.

This is the Best film of the year. Maybe that is premature since there are still five days left in the year and several films I have yet to see, but I feel pretty confident of my claim. Writer/Director Sam Mendes has taken stories passed down from his grandfather to create a vision of "The Great War" which is horrifying, compelling and tension filled. He and his co-writer Kristy Wilson Cairns have crafted a straightforward, time based adventure story and told it as a real world event. This feels like an incident that could have been a part of the war, even if it is not based on a real historical event.

The camera follows two soldiers chosen for a time sensitive mission as they must cross into enemy territory to deliver a message. The plot is laid out in a single sentence but the movie is more compelling than that brief description. The film is shot as if we the audience were a third member of the mission, observing everything from the perspective of our two protagonists. We are briefed, we have to wade through the back field of trenches to get to the front and we need to crouch down with them along the way. Much has been made of the notion that it is shot as if it was all one take. Since it took three months to shoot, and we know how a movie is complicated to make, it obviously can't really be a single shot, but you will be hard pressed to see the seams. There were only two moments when Mendes used the same technique as Alfred Hitchcock when filming "Rope". We alo have a passage of time that is accomplished by a character blackout. The movie still feels all of a single piece and is all the more hypnotic as a result.

Cinematographer Roger Deakins has turned in another stunning piece of work for Mendes. Having made "Skyfall" the best looking James Bond film ever, he uses some of the same lighting tools to make the landscape of France in the Spring of 1917, alternatingly ugly to encounter and beautiful to behold.  The nighttime chase through the ruins of the town near the final destination of the mission, is imagined as a variation of hell, with red flames projecting shadows on rubble and destroyed edifices while gun shots ring out and ricochet with sparks in the gloom. Our protagonist and the enemy are all able to use those shadows to hide in, but unlike the mudpile that is "The Lighthouse", Deakins allows us to see what is going on and fear what we can see. Thomas Newman, who has scored 14 Academy Award nomination without winning, can clear a place on the shelf for this score which ratchets up the tension at the right moment, but does so in a sparse manner that does not draw attention to itself. 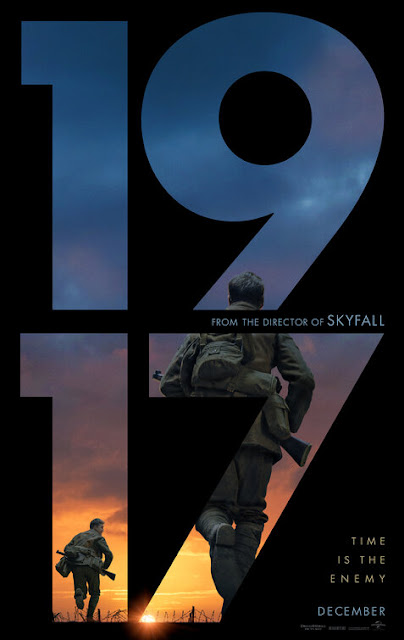 Landscapes and locations are a key part of the story telling and Mendes shows us these places in sustained tension filled reveals. The ruins of a farmhouse feel like a foreshadowing of a haunted moment. Cherry trees are shown as devices to covey the wanton destruction of war and simultaneously,  the promise that war is a passing moment in the land's history. There are desolate moments in the film where the bodies of the dead are an impediment to the mission, and the act of getting through a landscape without vomiting should be the basis for awarding a medal.  Years ago, I heard some film maker say that all war films are really anti-war films because inevitably, there is tragic waste revealed by the machinations of war. I don't know if that is true for all other films but it is certainly true with "1917".

There are two central figures we follow in the story and those actors, Dean-Charles Chapman and George MacKay are excellent in meeting the demands made of them. Lance Corporal Blake is determined  and motivated by his personal desire to save his brother. Lance Corporal Schofield is more cynical and war weary, but proves to be a stalwart partner in the enterprise. The physical efforts required to do the roles is daunting merely to think of much less to perform.

I suspect I will do a revisit on this film, and when I do I will have more to say about the themes and the story. For the moment however, my mouth is agape at the technical excellence of the film and the emotional experience that I was put into by the choices of the director. That's why I think it is deserving of the label I gave it at the start of this review. Best of 2019.
Posted by Richard Kirkham at 5:05 PM

One of my biggest frustrations of the movie year is not being able to see this movie. No showings in my state, no screeners, nothing. I have been so hungry to watch it but it looks like it will be January 2020. UGH!!

Believe me, your patience will be rewarded. Reminds me of the old days. E.T. had exclusive screenings for weeks before being opened wide.