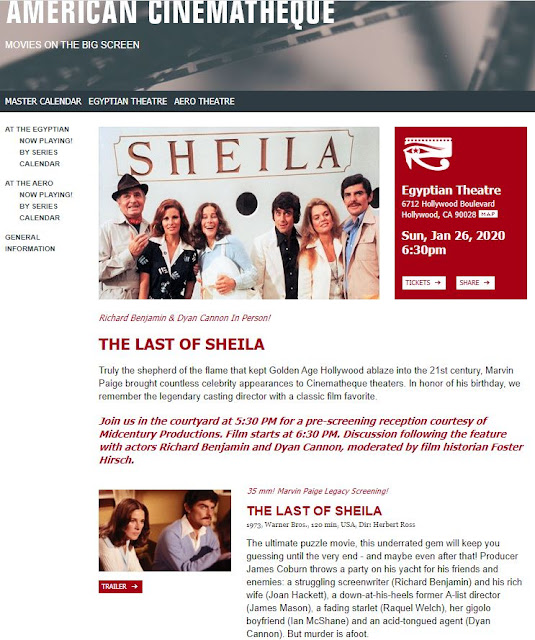 Another night at the movies with an old friend from the 1970s.  "The Last of Sheila" is a terrific murder mystery set among the Hollywood elite and on the French Riviera. It features an all star cast and a delightfully convoluted plot that finishes with one of the most cynical endings you will ever encounter. 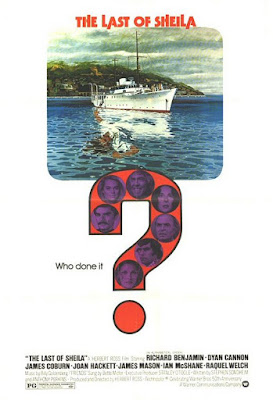 The most interesting aspect of the film from my perspective is that it was written by Composer Stephen Sondheim and Actor Anthony Perkins. The moderator of the discussion last night, told us he had visited Sondheim's apartment to interview him on several occasions and that the entry hall was filled with puzzles and games.  Sondheim and Perkins were famous for throwing parties that featured elaborate mystery games and scavenger hunts. It seems that they were encouraged to adapt their hobby into a script that could be made into a film based on the kinds of puzzle searches that made up for their parties. Of course there has to be a spine for the story and that is provided by the types of people that they would have at their parties, you know, Hollywood types and entertainment professionals.
There are seven principle performers in the story. James Coburn is a movie producer, who's rich wife was killed in a hit and run accident a year before. He plans an elaborate week on his yacht in the South of France for six guests who were at the party the night his wife died. He has discovered a variety of secrets about them and he uses those as cruel clues to torment his guests as part of the game. The main reason that they put up with such bullying behavior is that they each need something from their friend, a job, financing for a film project, or paying off a long held personal favor. The story then plays out through the game over the days cruising the ports and nights playing scavenger hunt puzzles to solve the game.

Of course there is a murder and everyone is suspect. During the course of the film, there are lots of clues dropped as characters interact and scramble to solve the puzzle. Actor Ian McShane, who is a ubiquitous presence in movies and tv shows these days, plays the hanger on husband of starlet Raquel Welch. He looks incredibly young and handsome in contrast to his older craggy self in films like the John Wick series. Raquel is the weak link in the film, whispering most of her lines but still looking the part. Her best scene is her final brushoff of her secret lover.

Dyan Cannon plays an talent agent based on her own agent Sue Mengers, a legendary Hollywood figure. Cannon is always a hoot in the films she appears in. Her role in this movie is mostly for comic relief as her character has only minor connections to the murder plot. If you are interested in seeing her in a more developed part in a murder mystery, I strongly recommend "Deathtrap" where her costars are Michael Caine and Christopher Reeve. She was one of the guests for the conversation following the screening so more on her later.

The late Joan Hackett has a sympathetic and juicy role as the rich wife of screenwriting hack Richard Benjamin. They played off of one another really well and the complicated little game they play between each other regarding their consumption of beverages is one of the clues that move us forward in the game.

The film however, belongs to three performers who take the screen and make it crackle in dialogue, emotional desperation and cleverness. Richard Benjamin as the needy screen writer is also the clever guest who appears to be at the head of the pack when it comes to playing the game. The greatest moment in the film comes from his character Tom, when he explains that he doesn't have any gloves. I nearly bust a gut at that moment. Coburn is brutally charming and repellent simultaneously. He uses his amazing smile as a weapon to deflect responses from the victims of his cruel asides. His manipulation of everyone else still does not justify what happens but each time he is on screen, the tension level for all the party guests goes up.

No one will be surprised that James Mason's fading director is the acting apex of the film. He feigns interest in the game quite effectively, but on his face you can see he is really evaluating all the other contestants more that the clues. In the confrontation sequence in the climax, as he explains what has been happening, his voice never waivers but his eyes and body give way to the insecurity he suddenly finds himself in. His denouement is perfect in reflecting the cynical power structures in Hollywood, I loved his performance. 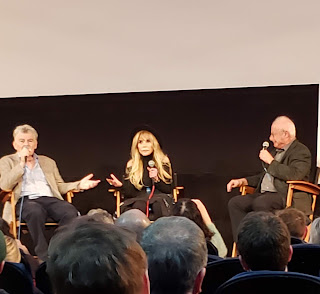 After the film had screened, film Historian Foster Hirsch interviewed the two guests for the evening. Dyan Cannon and Richard Benjamin. Both of them were engaging and free with stories, although most of the information they shared was already well known.

Cannon talked about how she modeled her performance on her friend and agent Sue Mengers, who knew that she was in fact the inspiration for the character that she was asking her client to play. Dyan told us about enjoying the time filming on the beaches of southern  France and about adding some pounds to her frame to play the agent, still not unflattering.

Richard Benjamin recounted how he traveled one day on a break from filming with his costar James Coburn in his newly acquired Ferrari. Neither of them had their passports with them as Coburn flew down the coast at 140 mph toward the Italian border. When asked for their papers Coburn took off his sunglasses and smiled and the border guard said "Ah, Mr. Flynt, welcome" and waived them through.  When they returned to France, virtually the same thing happened with the gendarmes controlling the French Border.

Benjamin also mused about how much luck was involved in the business. He was fortunate to be cast in a play, that lead to several other jobs and ultimately allowed him to direct as well.  He mostly allowed events to move him into the job of director. Dyan Cannon, who has also directed a few things contrasted his experience with her own, a woman in the 1970s trying to get a directing gig needed a much more organized plan.

Cannon has several projects she is working on, the one she spoke of at the TCMFF a couple of years ago is still on her plate, a musical based on her life. The play will include material on her life as Mrs. Cary Grant and she intends to star in it. She looks like she could nail it, she seemed to be a healthy octogenarian with good doctors and plenty of energy. Benjamin quipped that he was available.

I also had the pleasure of being seated with one of my podcasting friends Kristen Lopez from Ticklish Business and Journeys in Classic Film. She was there with her mother who was a big fan of the film, and there was a small service dog who sat quietly next to me on Mom's lap through the whole film. We chatted a bit before the movie and I said good bye to them as we moved through the lobby of the Egyptian Theater. Had I waited a few more minutes I might have been rewarded, Kristin posted a picture of herself with Dyan Cannon that must have been taken just a little while after I said goodbye. Nice for her.

Posted by Richard Kirkham at 11:00 AM