This may be on two distinct sets of lists at the end of the year. Some folks are going to find that it is a misfire that fails to manage the complex shift in tone that occurs on a regular basis in the story. Others will be beguiled by the delicate balancing act between the sweet and the bitter. It took me to the last couple of shots to decide which group I am going to fall into. Count me enchanted.

The lead character, Jo Jo is a ten year old boy who is a microcosm of Germany under Hitler. He seems to be hypnotized by the promise of the Fuhrer and the propaganda machine that engulfs the whole country. Little boys and nations can become obsessed with symbolism, and the swastika, uniforms and military pomp all sucker the crowds in. Taika Waititi has punctured these concepts with obvious asides about the stupidity of some of the things the boy and the country are buying into. That humor is often outlandish and it does provoke a big laugh on numerous occasions.  The dangerous high wire act he is performing exists because that humor is often juxtaposed with a horrifying reality. Even though those moments of tragedy are presented in non-graphic ways, it is a sudden jolt to the left that might upset the balance of the story at any time.

By making the lead a ten year old, the whole metaphor can be looked at as a loss of innocence on the one hand, but it is also a rude awakening at the same time. Since Jo Jo gets a Rabbit to interact with and he is designated as a rabbit by some of the other characters, I guess it is fair to classify this story as a fable. In many ways it has the same sort of fairy tale essence to it that "Life is Beautiful" had. The harsh realities of the world are being covered up by a childish view of the events surrounding our lead. That his imaginary friend is Hitler himself makes the story feel completely absurd. Sure we laugh at the amusing image of Hitler jumping out a window or sitting down to a meal of unicorn, but each moment is building toward the shakeup that will be so heartbreaking at the climax of the film. Sam Rockwell acquits himself with the usual high caliber comic performance he has been noted for, but he gets to pay off some actual sentiment in the end. Rebel Wilson is merely a cartoon in the movie, but it is a funny cartoon that we will never have to take seriously. 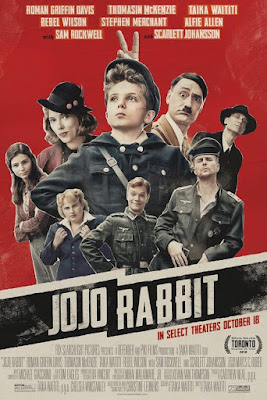 Straddling the gap between sweet fantasy and morbid reality is Scarlett Johansson as Jo Jo's mother.  She is an indulgent mother who vaguely disapproves of her son's embrace of Nazism, but she is also an enigma, one that presents us with a reality far from the domestic bliss she is trying to project. Waititi himself plays Hitler, and at times he is cloyingly obtuse and at other moments we hear the rhetorical weapons he used to seduce a whole nation being wielded against a child. If you hold your neck too straight in the curves, you may break it. The trick is to lean into the humor but try to ease back from it before the next breakneck switch in tone. I was able to do this more effectively as the film went on and I got used to the sort of whiplash inducing moments writer/director/star Waititi had in store for us. I can easily imagine though that some people will find it annoying.

Roman Griffin Davis makes his debut as the title character and the performance is essential for the movie to work. He has to be a kid who is both incredibly sure of his grounds while simultaneously doubting the foundation he is standing on. He hits those notes especially well with his interactions with costar Thomasin McKenzie. She plays a belligerent and sarcastic version of an Anne Frank character, and she must be stern but frightened at the same time. That the director got these performances from his cast is what allows us to go along with the story. Ultimately, it is a hopeful interpretation of the minds of the German population under the Nazis. If would be easy to dismiss it as a tasteless concoction that never quite gels, but I think in the last few minutes, it firms up into one of the best films of the year.
Posted by Richard Kirkham at 2:26 PM