This is Christmas week, so many of you will be anticipating the holiday and gifts under the tree. When you were young, you probably dreamed of the best toy, the most awesome electronic device or maybe a puppy. Did you ever get a knockoff or a stuffed animal instead?  It was probably a perfectly decent gift but it was not what you wanted and the thought is overwhelmed by disappointment, regardless of how much you ultimately enjoyed the substitute. Get ready for the same kind of feeling. "Star Wars: The Rise of Skywalker" is a Star Wars movie, it's just not the one you wanted.

Regardless of where you come down on the Star Wars movies, whether you are a prequel hater or you liked what Rian Johnson did with "The Last Jedi", this one will probably confound you. My main objection to the film is that the plotline is a mess of interrelated incidents that feel like a string of those plastic monkeys that come in a barrel. You have to hook the next one with the last one, and you do that by what is available to you rather than what might be most logical. For instance, a twist involving C3PO comes up as a complication. A big chink of the film id directed at addressing that point and suddenly that point becomes irrelevant and a different issue comes up that the heroes must overcome. The tracks made by each of these developments are so apparent that it might as well be a diagram/flowsheet on the screen. Unfortunately, several times, when you follow the path it is a dead end designed to merely fill the plot with opportunities for more planets, creatures and battles. Say what you will about the awful "Phantom Menace", at least the plot points were all relevant to the story. The stitches on this amalgam of retcon and repair from the previous film is just to obvious.

Another reason that it feels so paint by the numbers is the introduction of an old character, being plugged into a the story, primarily for the nostalgia factor. This sort of fan service will be rewarding to we long time acolytes but the reappearance of at least four characters that were either dead or absent from the previous two sequels is sometimes just awkward. At least we were spared a return of Hayden Christensen. There is a major plot point which is probably not a spoiler if you have watched the trailer or heard anyone talking about the film before it was released. If you are worried about a spoiler that's not really a secret, skip to the next paragraph. A major Sith figure returns to the story and it feels incredibly inorganic. It is used to explain some of the events of the previous film, but mostly, we just needed a main figure to turn into the ultimate "big bad" so that the story arc of one on the major characters here can play out and repeat a redirection trope from the original trilogy. Thirty-six years ago, when a second Death Star was introduced into the plot, some fans groused about a lack of creativity, but at least it made sense that the Empire would be relying on it's existing technology to continue their program for enslaving the Galaxy. The fleet that suddenly appears in this story, complete with enough personnel to manage it, makes no sense whatever.The two sentence explanation is a major irritant. When we discover that each one of these thousand ships is capable of doing what the Death Star did, or what the Planet Killer could, nothing in the story feels right anymore.

For two movies we have been watching the character arc of Rey and Kylo Ren get more involved and more apparent where it it headed. I did like that ultimately this is the A-plot of the movie. There are a couple of revelations and memories that come back to answer the questions we had about the prior film, but those points seem relatively contrived. Why can a memory accomplish what a flesh and body person could not? Does the heritage of Rey really need to go down the plat it did or is this just a way to justify the main plot? The reveal has a momentary injection of adrenaline but it doesn't take long for it to turn into a WTF development. I was perfectly content with the return of a character in an ethereal form,  but I recognize it for what it is, fan service. This is the conclusion of the nine part "Skywalker" story, so fans are going to want a lot of these things, whether they are necessary or not.

Other characters that were introduced in "The Force Awakens", continue to be in the story, largely without purpose and squandering what made them worth in that film.  Poe and Finn should have been the kinds of characters that Leia and Han were in the original trilogy. In those first movies, those characters had a story arc and their actions mattered in the long run. No one seems to have figured out what to do with the new secondary characters except plug them in for exposition or as appendixes to the main story arc. Did you think the character of Rose was going to be relevant after being introduced in the last film, well guess again. General Leia Organa has a more developed part and a bigger role in the story and Carrie Fisher is of course entirely in this film through archive footage and some technical wizardry. That was not a problem for me, but obviously J.J. Abrams and his team of writers thought that was more important than doing something with new characters. I liked the fact that Chewbacca and C3PO have story time given to them, but it again feels like this is because this is the last film they will appear in rather than it was necessary for the plot.

I didn't count but it felt like there were a half dozen separate light saber battles in the film, most of them involving Rey and Kilo Ren. I did not hate this but a little bit goes a long way and the drama of a one on one confrontation gets undermined when it is repeated and all that is being accomplished is an opportunity for some different sword-work. Errol Flynn and Basil Rathbone needed one big duel to make the point, and it was a climax of the movie. These light saber battles feel like a version of tantric sex, lots of foreplay and then deferred payoff. The spectacle of the fight on the water was great to look at but it had no point, like many of the plot threads in the rest of the movie. 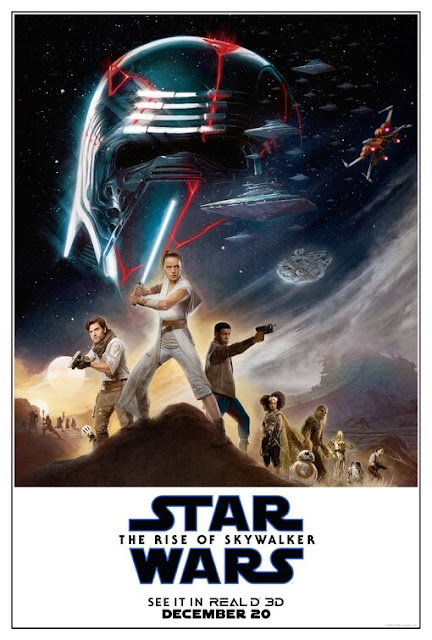 I wanted real emotions in the movie and I felt like I was simply being run through the process. I understand why the Rey and Leia dynamic was handicapped, but so many other relationships were as well. Finn and Ray needed to be going somewhere and there is a humorous thread about that which gets tugged on but not followed. Finn and Poe have a friendship which should be explored more, but they are rushing through so many plot complications, we don't feel like they have the connection we expect of them. A love interest for Poe comes out of nowhere and then goes no where. There are two adorable new characters, a mono wheeled droid and a tiny monkey hacker, their presence does nothing for the plot except create a diversion while the next thing is coming along.

Long standing fans of the series will like the movie well enough. It is going to be measured by the other films in the series. But do we really want the legacy to finish on the note that "at least it was better than "The Phantom Menace and Attack of the Clones"? That seems to me a sad way to finish off the pivotal film franchise of  the last fifty years. That's like opening your Christmas present and being grateful that it wasn't underwear and socks.
Posted by Richard Kirkham at 7:57 PM