Let me start by saying, I am not a fan of racing. I have nothing against it but the idea of watching cars travel at high speeds is attractive to me for about five minutes. After the first thrill, it seems like a lot of waiting around. I know I am an exception because NASCAR is incredibly popular and the Indy car circuit has been around for more than a century. The same can be said for formula one racing which enjoys international enthusiasm that I can't muster. With that out of the way, I can say I am a fan of  racing films. Several years ago, I listed "Rush"  as my second favorite movie of that year. Earlier this year I enjoyed "the Art of Racing in the Rain". I even liked the Stallone racing film and "Days of Thunder". So how is it that I ended up liking this film so much?

My appreciation for a film about a subject that I am not well versed in or passionate about comes down to the simple fact that film making is all about controlling the audience perspective. As an illustration, I posted a list a few years ago of my favorite sports films, three of the ten films were hockey movies. I've never been to a hockey game, I've never watched a whole hockey game on television and the idea of a sport played on ice is appalling to me, I hate the cold. Film makers however, are not worried about the contest, they know the outcome already. They don't worry about the rules, they can ignore them or alter them to suit their purpose. What screenwriters and directors do care about is the audience, what is it we want out of the experience? That is the thing that makes a movie like this work for us.

In "Ford v Ferrari" we see the races from the best angles. We focus on the key moments and not all the drudge work that gets to those points. Best of all, in a racing film we are in the cockpit and we see the race from the perspective of the driver as well. That creates the drama that keeps us focused on the story of watching someone drive a car. In this film Christian Bale plays driver Ken Miles and his character is one worth following. He is a hothead who also happens to be an excellent driver. His volatile relationship with the car designer and the corporation that is backing the team is emphasized not just in scenes played out in garages and offices, but while he is driving the vehicle they are all counting on. I think he nails the English accent spot on [those of you who don't get the joke are excused from making a comment on my ignorance]. He has to act opposite a big movie star, a child and a piece of machinery. He makes each of those relationships work in a realistic way. 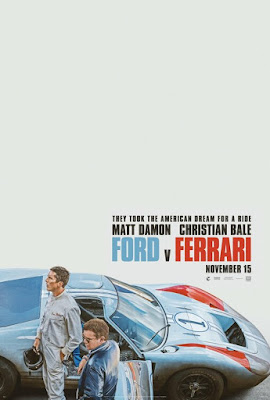 My friend Doug is a big race fan and he will tell you how there is a better story somewhere else, or how the film is not accurate is some way that matters to race fans. The rest of us don't have to worry about that because we know what we are seeing is a fictionalized version of the events. Like all story tellers, the three screenwriters and the director, exaggerate to make a joke work or emphasize a dramatic beat with a piece of information that we need just at the right moment. The film does center on racing, but most of Matt Damon's work is in the garage or board room rather than behind the wheel. The background on the Ford Company attempt to purchase Ferrari may not have happened in the sequential order that the film presents but that presentation makes the rivalry more meaningful and interesting. You could easily be fooled into thinking that Christian Bale also played Henry Ford II, since the portrayal is a mirror image of the Dick Cheny performance he was responsible for last year.

Since the events depicted are based on real historical incidents, you will be aware of the outcome of some of the suspenseful moments, but James Mangold manages to make them suspenseful anyway. Having worked with Christian Bale in "3:10 to Yuma", Mangold probably felt comfortable in the casting of Bale and Damon in parts that were originally scheduled to go to Tom Cruise and Brad Pitt. While I would have enjoyed seeing those two reunited on screen, I think this pairing works really well. The loyalty but pragmatism of Damon as Carrol Shelby is a good counterpoint to the flashier Ken Miles and it is to Damon's credit that he lets Bale drive not only the vehicle but the film as well.

Posted by Richard Kirkham at 7:50 PM