Lord of the Rings: One Day Trilogy Event

As a fan of the American Cinematique and the Egyptian Theater in Hollywood, I look forward to big movies presented on the big screen on a regular basis. New exclusives like "The Irishman" or old favorites like "Lawrence of Arabia" make sense on the extra large screen at this theater. Yesterday however was pushing it to the extremes a little bit. All three Lord of the Rings films, in the extended editions on 35mm is really big, and frankly intimidating. This is at least a twelve hour commitment so you better not have any other plans this weekend.

It was way back in 2011 that I did posts on the extended editions and their theatrical release. Those screenings were basically extended commercials for the upcoming blu-ray release of the films. Unlike the most recent experience however, the films screened one at a time over the course of three different Tuesday nights. This was all three films in an indulgent day of film going. I was not at all shocked to see that the event was sold out and that it was heavily attended bu cosplaying fans of the series. We had to strategize a bit to work out being able to do this and survive. Fortunately, the programmers planned a thirty minute break between each film so we could run out and get something to eat or simply some fresh air before the next stage of our Middle Earth journey began.

Of the three films, my personal favorite has always been the first chapter "The Fellowship of the Ring". Peter Jackson's world building is so well set up in this film that all of the grand moments in the second and third chapters feel more natural as a result. I recognize that the whole trilogy was largely shot at the same time and we are getting three segments of one film with each entry, but you have to start somewhere and the Shire is a great start. Hobbiton and Bag's End are exactly how I envisioned them when I read the books as a kid. The one thing that took a couple of minutes to get used to was the look of the hobbits. Their depiction is a lot more subtle than my imagination but it only took a short while to adjust. This is also the simplest of narratives since the story focuses on one group for the most part and two sections of the journey. The second and third acts distribute the characters into multiple locations and time lines so they are not as elegantly straightforward as the first chapter.

"The Two Towers" seems to be a popular favorite with many on-line fans citing it as the best episode of the three. Like many second acts, the character development in this material is more substantial. There is more background on Aragorn and Merry and Pippin become characters that are more than simply the comic relief. The introduction of Gollum/Smeagol is a technical advancement and an unexpectedly poignant performance from Andy Serkis. I also think that Brad Dourif as Grimma/Wormtongue has the right amount of villainous flourish to make the film sparkle among the often grim characters. Everyone probably has a favorite character in the series, I am particularly fond of Theoden and the portrayal by Bernard Hill starts in this film and gets even better in the follow up.

We had succeeded in seeing the first two films in a 35mm format, but about a half hour into the third film, the management realized that the print they were given by the studio was the original theatrical version rather than the extended edition. After a survey of the audience, they switched to the extended edition that they had available on blu-ray. This presented two issues for the patient but tired audience. The bigger issue was that they started the film over, so that meant we sat thru the first 30 minutes a second time. This resulted in a finish for the day, well after 2 am. The other issue is that the blu ray actually has the film split on two disks, so there will be a delay break in the middle of a battle scene to make this switch. Being the owner of more than a thousand laser discs, this did not bother me at all, but you could tell that many in the audience were disconcerted about the technology. 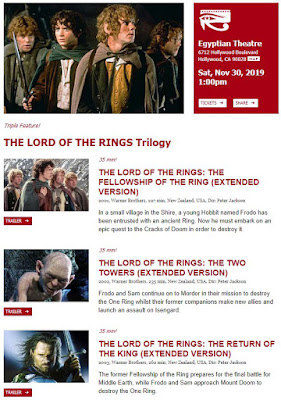 While it is frequently lampooned for it's multiple endings, "The Return of the King" needs all of those beats to make the wrap up as satisfying as it is.  Everyone who has a part to play in the film gets some moments on the screen to shine. Boromir comes back for a flashback in the extended edition and it retroactively enriches his character in the first film. The battle scenes are the impressive feat of this chapter of the series and they are spectacular. Just as Andy Serkis was neglected at awards time, it is a shame that Sean Astin was left out of the supporting actor race, his interpretation of Sam Gamgee is definitive in my opinion and it could have been over the top but instead it was just right.

The wisdom of a thirteen plus hour commitment to a film day might be questionable but the emotional satisfaction more than compensates. I hope to catch up on a little sleep later today, but I don't regret doing this and if you love these films as well, take a chance when you get the opportunity to indulge.

Posted by Richard Kirkham at 3:19 PM