Numbers ending in zero or five are ripe for look backs. Since we are about to move to 2020, see how many blogs are posting their best films of the last decade. This film goes back a lot further than a decade, this is the 75th [see there is that 5] anniversary of the release of Meet Me in St. Louis, one of the great MGM musicals of all time and maybe the high-point of Judy Garland's career in musicals. Maybe you love "A Star is Born" or recognize that "The Wizard of Oz" is a classic but there is no denying that Judy was at her luminous best form in this film. When you see the Technicolor images on a theater screen, you will know why she was a star.

It was just a couple of months ago that I heaped praise on Renee Zellweger for her performance in the biopic about Garland "Judy". As great as she was, the real thing is still so much better and this was a chance to see an old favorite back up on the big screen. A year ago it was Movie of the Month for Christmas on the Lambcast, and the show was hosted by my daughter Amanda who had been the sponsor of the film in the first place. There was a little controversy over whether it really is a Christmas movie, since only the third act featured Christmas as a subject. The following three minutes settles that issue.


As great as Judy Garland and Margaret O'Brien are in the picture, I would like to single out Lew Ayers and Mary Astor who play the parents in the movie. They are the foundation of the family and without the sincere family foundation that they create, the movie might have seemed a little silly. Their most charming scene occurs right after the uproar created when Mr. Smith announces they are moving to New York. Everyone is upset but Mother soothes the nerves with a piano tune that Father sings to and the two of them remind everyone what is most essential in their lives, it is a terrific moment in a film filled with terrific songs and moments, and it is all centered on someone other than Garland for a few minutes. By the way, by the time the scene finishes, you will desperately want a piece of cake.

As we walked out of the theater, Amanda turned to me and said, "Now it's Christmas Time."  I 100% agree. I felt uplifted by the experience and nostalgic for the Christmases of my own past. I suspect we may be watching it again before the season is over, but it was a real treat to see it in a theater with dozens of other fans, all glad that there was a 5 at the end of the anniversary this year. 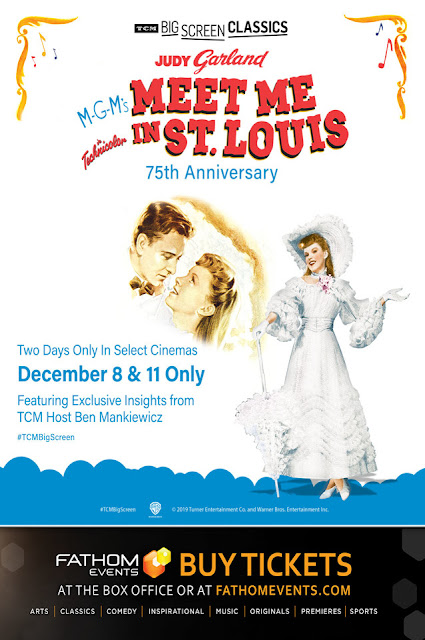 Posted by Richard Kirkham at 8:37 PM