I know I am an old man in comparison to most of those doing movie blogs, but it is still hard for me to believe that it has been forty years since "Alien" first showed up on screen. It sure does not look like a 40 year old film, with maybe the exception of some computer graphics. This movie is one of the great examples of production design enhancing the movie at every turn. Since I have written about this film before, I'm going to try and develop some of the aspects of the movie that may be sometimes overlooked but are crucial to making it work.


H.R. Geiger and Jean 'Moëbius' Giraud deserve the rightful praise for the creature and environmental design work they did. Oscar nominees Michael Seymour, Leslie Dilley, Roger Christian and Ian Whittaker should also be saluted for turning this movie into a template for future Science Fiction films. The first character we met in the movie is The Nostromo, a mining ship returning from an extended mission to the outer rim of the galaxy. There is a long slow pan across the outside of the ship that moves across it's underbelly and shows us the haphazard placement of unidentified technology that makes up the ship. When we slip inside the vehicle, the camera moves around dark dank corridors of the mining platform, through to the command module of the ship and then to the crew quarters. There are empty coffee cups and food containers and a variety of nick knacks that might be left around by a group of people on a long term project. We can see objects on stands shimmy with the movement of the space craft, and there is one of those perpetual dunking ducks, that is still working, even as the crew slumbers in hibernation. As the computer comes on with new instructions to awaken the crew, we see the screen reflected on the visor of a flight helmet. This is an interior that we come to understand. It is complex but also well used.

The hibernation chamber is probably the cleanest hi-tech room we see, and after that, the med-lab. When you get into the mining platform, it is all dark corridors and steam pipe fittings and condensation falling like rain down on equipment and people. The escape shuttle looks sufficiently cramped and dark so it was not hard to imagine why Ripley did not see the Alien tucked into a tight space at the start of her escape. Of course the vessel on the planet is also a design of gargantuan proportions and it is otherworldly through and through.

For other comments on the film, let me direct you first to my original project, where Alien was the focus of the 11th post I did.  Four years ago I did a special screening of "Alien" and "Aliens" at the Egyptian theater, which included some special effects guests and was very good. 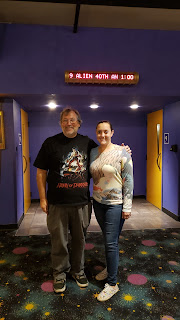 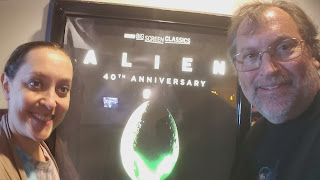 It was a nice day to celebrate the 40th anniversary of this essential film.
Posted by Richard Kirkham at 6:16 PM