If you were to take "Brokeback Mountain" and cross it with "The Shining" and add a little Herman Melville to the mix, you might get what this picture attempts to be. It is sort of a sea shanty about madness from isolation. Now sprinkle in a little tentacle sex and you start to get a clearer picture. What I have given you here is a far more coherent description of the film than you will get from watching it for 109 minutes. This pretentious piece of dreck has little to offer and everything to frustrate.

I will be honest, I was not a fan of the much admired first film from writer director Robert Eggers. "The VVitch" was slow, ponderous and the end of the film undermined what the movie seemed to be trying to accomplish. I don't know what this movie was trying to do, but I can tell you what it did for me, it pissed me off. Both of the actors, Robert Pattinson and Willem DaFoe, dive in whole-heartedly to the proceedings, with Dafoe  hamming up the arcane dialect in a manner worthy of a pirate movie. Half of the dialogue will get lost in the style of delivery, but it won't matter because there is no consistent voice to what you are seeing anyway. Oh, and by the way, you won't be seeing nearly as much as you should. Eggers has decided to shoot this film in black and white, mainly at night, in a location with one source of illumination that can't be turned into the camera. 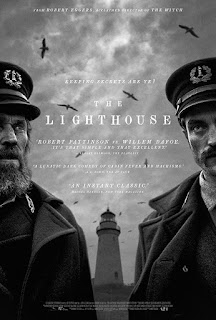 At one point one of the characters suggests that the whole experience was just in the head of the other character. That would have been an indicator of where we might go, except that a dozen other things happen which suggest that the two characters might even be the same person. Which doesn't make any sense even in a horror film, which this may or may not be classified as. I had no idea what the story was about, all I knew was that the two actors are in a lighthouse. After watching the damn thing, that's still app I really know. The camera pans up slowly, then it holds on something for a while, then it pulls back, and then there is a close up, none of which contributes to suspense, terror or drama. There were some people laughing, so maybe it is supposed to be a comedy, but it did not strike me as funny at all.

It looks like I will be an outlier on this, there are great ratings on many of the mega sites like IMDB and Rotten Tomatoes. I will try to listen to some of my fellow bloggers and podcasters as they talk about this, but if you hear a foghorn in the background it may simply be me calling "bullll...shiiit." If I see Mr. Eggers name on future projects, I will be sure to let those who appreciate his torpid style and incoherent narratives enjoy themselves. I'll be looking for something human beings might like.
Posted by Richard Kirkham at 4:48 PM