The culmination of eleven years of intricate story building, expanded universe and a plethora of characters, "Avengers: Endgame" has arrived. With a film like this, we have to be careful about avoiding spoilers. This is probably the most anticipated film of the year and the one that has had the most written about it. Everyone has a theory and everyone is afraid for characters they have invested in. It takes over three hours to spill out onto the screen, and there is still too much to be taken in all at once. My general take on the film is that it is a slow burn that tries to build on the emotional remnants of "Infinity War" and falls a little flat there. By the end however, the action is furious and the spectacle is visually overwhelming.

One of the things that was so amazing about "Infinity War" was that it actually told a story that made the villain into someone we can understand, even if we don't agree with him. Thanos is the biggest of Big bads in the comic world. Once he has the Infinity Stones, there is no stopping him. So the inevitable conclusion of the previous film is a somber kick in the teeth for our heroes and us. With one little credit sequence, a ray of hope got dropped on us and it has had to sustain us for a year, now it is payoff time. Captain Marvel was introduced in a film that is still playing in cinemas at the moment. She is an inspiring character, but she is equally somber as the start of this movie. Admittedly there is little to smile about, with half the population gone and the other half mourning them. Out of the blue we get a rescue of our stranded hero and a reunion with the remaining Avengers. That moment of sunshine disappears in a big plate of resentment by one of the Avengers against the others. For some reason, the drama in this segment is so sour as to be off putting. Because it takes another forty minutes or so to get resolved, the first hour feels padded.

One of the Avengers appears to have been changed for the better by the experience of failure. The image of this character in their present form is another element that shakes the foundations we have with the series. It was a strange choice and I don't think it works very well. Some of it is played for laughs, which also seems out of place in this section of the movie. There were two other paths that fit more effectively with the characters we know. Two Avengers take journeys, one into conventional bliss and the other into criminal darkness. Captain America appears to be trying to cope with what has happened by being a mentor in a survivors group while Thor has mostly abandoned his place in the group. Again, this will all seem very abstract because I want you to be able to discover the pleasures and pitfalls for yourselves.

After this lengthy opening hour, the plot begins to drive the film more. This becomes a time traveling heist film. Now both of those genres of stories have appeal to them, but the conundrums created by time travel make things incredibly complicated, despite the attempt to dismiss all of that change as irrelevant. We are going to revisit several earlier moments from the other 21 MCU films and retcon them to make a solution to the Thanos problem possible. There are so many balls in the air at once that it will be easy to get lost or confused. Don't worry, you won't have to keep track too long because things start to gel and rush forward once the objects of the heist are gathered. Of course the pleasure of a heist film is that nothing ever goes as planned and the operatives have to improvise. This results in some unnecessary side journeys which do little to move us forward but do provide the kind of fan service that followers of these movies want. So you want it, you got it. Cap makes Hydra look stupid, Starlord ends up being a bigger dolt, and Tony will get an opportunity that he missed out on in an earlier story.

Again, I don't want things to be too directly revealed, but if you suspected that Dr. Strange and Scott Lang were going to be important to the mechanics of how this will all work out, give yourself a gold star. If you understand quantum physics, you know, just to keep up with conversations, then maybe it will all make sense. I'm willing to let it be a comic book solution to  comic book problem and move on with my life. However it all got done, let me assure you that you get a final battle that will stand alongside any of the great epics of our time. So many characters are involved and there are so many reverses, short lived successes and premature victories and defeats that your head will be swimming.  I suspect the Game of Thrones battle coming up in the last season will have similar effects. My personal favorite moment in the movie was foreshadowed by a brief shot in "Age of Ultron", and it comes to full life in the segment.

Again, trying to avoid spoilery material, let's just say that the resolution of a couple of stories are indeed quite sad. I won't tell you that I cried but there was a little mist in a couple of moments. I probably would have enjoyed one final reveal a little more if the asshat behind me had not guessed it out loud two seconds before it showed up. That gas bag is the reason I am being extra circumspect with my comments here. On the podcast this weekend, we will do the best we can to keep the spoilers in a distinct section that you can skip, but I do look forward to talking with everyone about the plotlines, character twists and action moments of the film. "Endgame " is satisfying for the story lines that were developed but I don't think it works as well as a movie as many of the other MCU films have. I don't do ratings on my site but at the Lamb there will be ratings. It is maybe a top ten MCU film for me but not a top five. 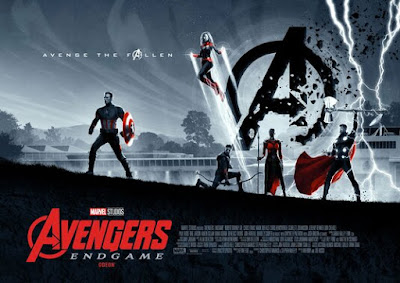 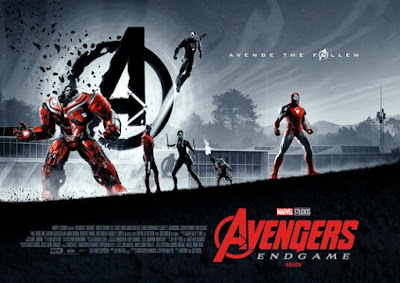 Posted by Richard Kirkham at 4:53 PM

Good review! I thought the film was great, but not perfect or near perfect. I'm glad I saw this movie in the cinema because I had a wonderful theater-going experience! I also wrote a spoiler-free review of Avengers: Endgame, with a spoiler review coming on my blog this weekend. Here's the link if you want to check it out:

Will do, thanks for coming by.

You should have beat up the ass hat sitting behind you!

I'd have spilled my popcorn.