Back in 1998, M.Night Shyamalan was dubbed the second coming of either Hitchcock or Spielberg.  With his well crafted thriller "The Sixth Sense" he restored our faith in what a good horror movie could be and he provided a twist ending that still impresses twenty years and a million spoilers later. He made two more solid films before he tripped with "The Village" and then fell flat on his face with "Lady in the Water". But it took "The Happening" for audiences to laugh him off the screen and write him off for the next decade. Director Jordan Peele was favorably compared to Shyamalan after his clever and very successful "Get Out" showed up two years ago. It also restored our faith in grown up horror stories and had similar kinds of plot twist moments. Peele however has skipped the next phase of the Shyamalan career, a couple of less successful but still credible films, and he has instead taken a dump that makes "The Happening" look like a modern classic.

I cannot express how disappointed I was at this film as I was watching it unfold. This is a miscalculation by someone who is clearly talented but did not seem to have anything to say with his next film project. "Get Out" had something to show us about race relations and class in a post Obama world. It was also creepy as hell for the first hour and incredibly intense in the second. "Us" does not have the benefit of a whole hour of slow burn, it shoots it's wad in the first ten minutes and then never reaches another moment as effectively again. Oh, and the set up that had the brief flash of excitement and fright to it, was not that great in the opening anyway, which made the movie all the less interesting as it went along. If there is some cultural, political or dramatic concept that this movie is trying to make or subvert, it fails on every point.

A horror movie can make you laugh at a moment as a release from some tension or thrill that it provides. The catharsis such a moment brings is just what an audience wants. If a horror movie is making you laugh at it's premise and the stupidity of the events in the story, you have a bad horror film. That is what you get with this. If you have seen the trailer, you know that a doppelganger family appears to start a home invasion story with our protagonist family. The moment one of those characters starts to speak I had to suppress a laugh, but when another character starts uttering call back sounds, it not only is guffaw inducing, it is ludicrous.  If you are not being terrified by a horror film, why are you watching it? That's the question I started to ask myself along the way. I also asked myself how much worse it could get, and the answer was...a lot.

The actors do their best, Lupita Nyong'o in the lead duo role is effective, but her doppelganger character is given some silly exposition to deliver and it is presented in a voice that instead of being frightening, makes you want to get her some Nyquil for her stuffy nose. Winston Duke fairs better but not by much. He fortunately spends less time in the doppelganger role and he also comes the closest to being a real person in the story. He is a goofball of a Dad, which is of course the preferred way to present an adult male in a family these days. He says the wrong thing to calm down his wife, he is a bit of a joke to his kids, and the whole powerboat subplot exits to create a single scene that allows him to have a moment of success by accident.

If you stretch your imagination enough, there might be some kind of social commentary about keeping up with appearances. The family friends that they connect with seem like cardboard cutout shallow people. Elizabeth Moss and Tim Heidecker feel unpleasant from the moment that we meet them. Their twin daughters are stereotyped mean girls without actually doing anything mean. When the story shifts to them for a few minutes in the middle of the film, it has no tension to it and it only feels different in how quickly events play out and how well everything is lit because they have a back up power generator and the other family does not. 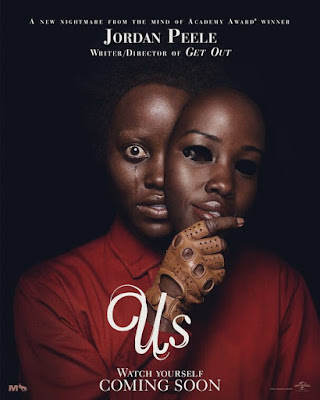 You want to know that you are getting into a bad film that takes itself too seriously, look for an opening scroll that tries to tell you that there is some real idea behind the hoopla. If you think that abandoned subways and tunnels are the lurking places of the bogey man, then maybe you can be convinced that this story is real, HA. Remember how Mark Wahlberg spent an hour running away from the wind in "The Happening"? And do you recall how you laughed out loud when you found out the monsters are the trees? Well that resolution is brilliant compared to the explanation we get here. I have not found rabbits so silly since bugs bunny, and the fear factor in "Monty Python and the Holy Grail" is eons ahead of this. There is of course a final twist that makes everything that came earlier seem even more preposterous.

In fairness I have to admit that I have not cared for two celebrated horror films of the last few years. "Hereditary" had a lot of visual spark to it but the storytelling fell apart for me. "Cabin in the Woods" is a joke that might work for twenty minutes but takes two hours to get to the punchline. Those movies had moments but "Us" did not work for me at all.  Let's hope that Jordan Peele doesn't screw up "The Twilight Zone" and that his next movie stays out of the water [like M. Night should have done.]

Posted by Richard Kirkham at 10:06 AM

Ouch. Here's one reason I love movies so much. Different points of view. It's funny how different we both see both "Get Out" and "Us". I thought Peele's debut effort felt very much like a first film especially in its messing final act. I loved the crazy, clever, and open-ended approach to "Us". The second viewing opened it up even more.

Well believe me, I will not be having a second viewing of Us at least until it is running on one of my premium channels. I was really frustrated by the storytelling here. I know you felt differently, most people do but that's what makes reading these blogs worthwhile, the diversity of opinion.

While I do agree to a certain extent that the movie could have been better, the doppelgangers could have been used differently to really make it a scary movie, and some of the concepts presented in the movie itself fell flat, or entirely flew over people's heads, I have to point out that Jordan Peele was trying to show how everyone was striving for the American Dream, the boat in and of itself was to be another materialistic item to strive for to show off success and wealth. And when the boat failed to work, it was showing how the American Dream was just that, a dream, put into reality and it barely holds up. Even the doppelgangers sometimes fell into the hopelessness of the American dream, but they only ever felt satisfied for a little. This concept that was shown throughout showed how no matter how long you try to get that American Dream, the life everyone is craving, you want something else or something ends up halting you, and ultimately you end up saddened and reaching for that carrot on a stick, just barely out of reach, never quite able to fully grasp it.

I haven't seen any of the 9 films/shows (yes, i counted) that his blog compares the movie "Us" to. That aforementioned fact probably makes me an uncultured swine, but it did, however, help me critique this film individually, which makes me believe that this movie was still pretty darn good. While I wasn't terrified throughout the entire movie, I thought it was still captivating as the storyline itself was pretty suspenseful and packed with a bunch of symbolism. I agree that the bunnies and subway tunnels were far too bit a stretch for the imagination to put together, but the concept of duality was pretty clear throughout the movie. Also, props to Trinity for pointing out the "American Dream" perspective as I definitely did not notice that.