With a smattering of special effects and some old school style storytelling, "Captive State" manages to be a smart, compelling Science Fiction allegory that will make you remember the films of the 1970s without being old-fashioned. This film is more cerebral than is healthy for the box office, but if you are willing to think and fill in the story elements, you will come away impressed by the things that were accomplished here with solid acting, a cryptic script and an idea that has been around for a long time.

"captive State" barely touches on the manner in which our planet became an occupied state. That process is over by the time the credits have finished. This movie takes place well into the occupation and it uses some long standing ideas as the crux of the story. Aliens have come for our resources, but they need our cooperation to get them. Their solution has been to take over the political processes of the Earth and replace them with their own form of governing. They manage to convince the power elite that they will survive and everyone else is given pablum about how great everything is now that we are subjected to this domination. Although this is an alien invasion film, it is not really about the aliens. They appear in relatively few scenes and are largely a menacing off screen presence. It is the Vichy style police state that is the true enemy of humanity, and it is uncertain if an insurgency can be reignited after having been crushed once before.

There is an overwhelming sense of sadness about how compliant we humans have become. The folks who make up the deep "terror" cell of resistance, come from some of the obvious places but there are also a few surprises. Much of the story involves how they have to circumvent the surveillance that the whole population is subjected to. The police have become a tool for control and they have power that can only be described as dictatorial. John Goodman plays the head of the security police in a troublesome district. His methods are successful but he seems to be holding back on some potential problems as a way of protecting former family friends and securing a complete victory over the Chicago resistance cell at the same time. He has always been one of the best things in any movie he appears in and this is no exception. Although his name is the first lead on the promotional material, his story is secondary at times to that of Ashton Sanders as Gabriel Drummond, the younger brother of a famous resistance leader. 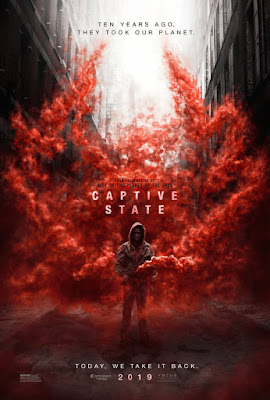 I mentioned that this was old fashioned story telling, well here is why I say that,,, very little is explained to us. We have to figure out what is going on as the story develops. Sometimes there are dead ends, and in other places there are moments that feel as if they are going to be important, but they are a red herring. Characters interact with one another and we don't know their motivations or relationships, we only see their actions. That means we need to pay attention to those actions and my guess is a lot of people will not like that. There were a ton of crime films and science fiction films in the early 70s that did the same sort of thing. Nothing is spelled out in bold letters explaining what is happening or why it matters. Because the film is set in the decaying parts of Chicago after the invasion, it feel gritty like one of those movies as well. There are some action beats but most of the movie is suspense based with some mysteries deeply buried for us to wait to unravel.

This is a stand alone film that could easily be turned into a franchise but I doubt it will have the financial cache to get to that. Vera Farmiga, Kevin Dunn and Alan Ruck are seasoned veterans of movies who are small background players in this story. Kevin J. O'Conner,is another who is working in the background to make the scenario seem real. The movie though belongs to Sanders and Goodman and they have the ability to play it honestly. I thought the wrap up was sad as hell but also inspiring. I won't say it is a total surprise but the way it plays out was not exactly what I chad come to expect. This is not really a popcorn movie despite the Sci Fi trappings. If you are interested in seeing how grown ups tell a story about the alien scenario, then this is the movie for you.
Posted by Richard Kirkham at 5:10 PM

I could not agree more, one of the most visceral theater experiences I've had in awhile. I'll probably see it again. It's modern with an old school vibe - totally dead on. I sensed some film noir influences and Children of Men for sure.

I appreciate your comment about the noir influences. There is not a femme fatale but other moments of ambiguity also fuel that comparison. Thanks for coming by Eric.