So, thirty-five years ago tonight, my best friend and I sat on Hollywood Blvd. for more than sixteen hours, waiting in line to get a ticket to Return of the Jedi. A frat guy from UCLA was holding a place for his fraternity brothers and they all crashed the line a couple of hours before the midnight screening, almost starting a small riot. Our wives met us after work and joined us in line so they had been there for six hours, and they were not happy either. We got bumped from the first show and ended up near the front of the line for the 3 am show. That's right, 3 am. After it let out, Art and Kathy wisely went home, Dee and I went around to the front of the theater, got in line again, and went to the 6 am show. We later met Art and Kathy about 2 pm for a show in West Covina. So Three times on opening day, what a bunch of geeks. The world today is soooo different. Pre-opening ticket sales, reserved seats, a screening well before midnight, where did all the stupid fun go?

Tonight we left the house after ten, there was no line up for our showing of "Solo" because we were in a theater with reserved seats, and the suburban crowd was not as raucous as the crowd at the Egyptian 35 years ago. This time I was joined by my wife and my daughter who will turn 30 next month, yikes I am old. I'm not too old however to not enjoy a "Star Wars" film, which I definitely did. "Solo" is a controversial film because of the production disruption, the casting rumors and for some fans, a fatigue around the development of films in this franchise. Forget all of that, taken on it's own, "Solo" is a solid space action film with a central character that we already know about and some side characters that will make the story even more rewarding.

My two major criticisms of the film are easy to knock off at the start. The set up of the character Han and his relationship with Qi'ra is rushed and a bit murky. We are dropped into an action sequence before we have much opportunity to figure out the lay of the land. It is ultimately fine but I don't think it sets up their relationship as well as it needs to be. That's because there is a case sequence and series of action scenes that are visually strong but don't let their characters play off of each other enough to quite pull us into the relationship as much as is needed. The connection between Han and the band of criminals he ends up running with is developed a lot more effectively later on, and the movie gets that the character and not the action should be driving the story. The second weakness I i felt concerns the music. Without the ear friendly themes of John Williams, the music simply fills in spots rather than heightening them. It's only when a well known motif shows up that the score comes alive. I have loved scores by John Powell before, but this just misses being the ear candy that I crave in these movies.

OK, now for the good stuff. This is a caper film with two elaborate heists driving the story. There is a lot of creativity that was put into the visuals in the film, to make those stories interesting. Traditionally, you would have a planning sequence in a heist film and the audience would be let in on the agenda. That way when things go wrong, we will be reacting to the shifts and bumps with the characters. Here the first plan is just laid out quickly to give some context but we are immediately plunged into the action and that is the locomotive for the plot at this point. This is a train heist with a myriad of complications including a rival band of pirates that attempt to steal from the thieves. The action on a freight train in a hostile world in space was elaborate, visually inventive and it allowed for some character development as well. This was the kind of thing that was necessary but missing in the opening section.

The introduction of iconic characters is the strongest element in the film. Han and Chewbacca get connected in a very appropriate manner and one that sets up a relationship that we will see play out over the original films very effectively. There is some great humor in their sequence and the by play that develops between these characters is almost immediately natural. The one character that everyone will be talking about is Lando Calrissian. Donald Glover sparks the scenes he is in in just the same way that Billy Dee Williams did in the two films from the early 80s. He is debonair and clever, but not always as clever as he thinks he is. Some might call his interactions with Han "fan service" but it is exactly the kind of story seed set up almost 40 years ago that we want to see come to fruition, and it is glorious. 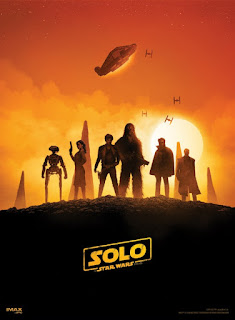 There are some other characters introduced into the story that that make this film a bit more unique. The aforementioned Qi'ra is both a love interest and a potential femme fatale. Dryden Vos is the Jabba like villain who is in the threatening background of the story until the climax when he is much more at the center. Paul Bettany does not get to do much more than wear some scars until the end of the film. Woody Harrelson's Becket is a cipher. Maybe some good in him, certainly some scoundrel, but not the light hearted scoundrel that is out title character. I especially liked the vocal performance of Phobe Waller-Bridge as the droid L3. Her tone matches the quirky and combative nature of this crew member of the team. The relationship L3 has with Lando is both touching and farcical. Along with K-2SO in "Rogue One" and R2D2 with C3PO in the other stories, it seems like the richest characters in this universe may be the droids. 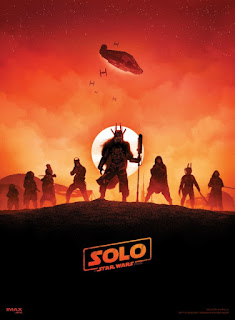 There was a lot of speculation and rumor about Alden Ehrenreich in the lead role. In some quarters it was suggested that the movie was doomed because of his performance and that maybe the two directors who left the project had not done enough to get a solid performance out of him. I don't know what went on before Ron Howard came on the project, but Ehrenreich is great. He looks the part and he can carry off the attitude in a lot of the scenes where he is called on to be both naive and a bit too clever for his own good. That he can hold himself against the charisma of Glover's Lando is enough to tell you he is solid in the part.

Haters are going to be disappointed because this is not the failure that was predicted. This is an entertaining picture, set in the Star Wars universe, and it meets it's objectives. The characters we want are set up for more adventures and they have the personality to succeed. There are subplots that suggest connections to the larger story but they do not dominate the film. Finally, there is a clear atmosphere of fun that is a lot closer to the original film than we have had in any of the contemporary Star Wars movies. Box office watchers will speculate all they like, "Solo: A Star Wars Story" succeeds as a movie, whether or not it outpaces, lags behind or matches any other Star Wars films or expectations. 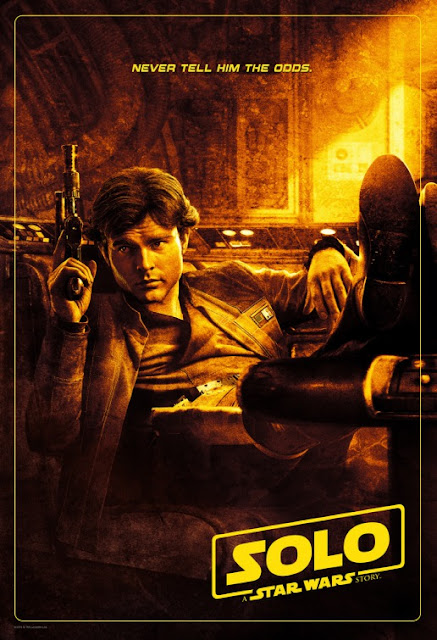 Posted by Richard Kirkham at 9:07 AM