I am afraid I have to admit, I am in the demographic this film is targeting. It felt a little odd being in a theater with so many old people, and then I realized, I'm one of them. So often I see myself as an old guy when talking to my students or other bloggers on a podcast. It is entirely possible that if I post this as a Lambscore, there will only be my review. The youngest star in this movie is sixty-five, so the crowd that craves "The Avengers" and "Deadpool", is well under half that age. This kind of film is counter-programming for the summer. Once in a while, the mature audience likes to be thought of as relevant enough to cater do, and movies like this result. It looks like this will be a successful venture for Paramount Studios, which could use a hit. The screening I attended was packed, and I think I may have been the youngest person in the audience.

Book Club focuses on four women who were friends in college and have stayed in touch with one another in large part to their shared club. They have all reached the stage in life where maybe their romantic life might seem behind them, but they don't seem particularly excited to leave sex behind them. Each one of course has a slightly different problem. Eighteen years after a divorce, one character has gone through the longest dry spell, while another is a serial one night stand as a way of seeming to be in charge but not risking abandonment. A third member has lost a husband a year earlier and is being smothered by her adult children, and the fourth is married but her recently retired husband seems content to retire from bedroom duty as well. Into their life drops a little mommy porn, as they select "Fifty Shades of Grey" as the next months book. Awkwardness, romance and comedy ensue.

The laughter this movie delivers is a result of the character of the women. Jane Fonda is the independent loner who has never been married and prefers to be in control, except she still seems to carry a torch for the man who did ask her to marry him.  It is a little odd that Don Johnson plays the long lost love of her life when he is the father of the woman playing the main character in the films made from the Fifty Shades series. The rekindling of their life is the least comedic of the stories, but it seems to have the most heart. Mary Steenburgen is married to Craig T. Nelson again [they were a married couple in The Proposal a few years ago]. Their story has the cheapest gag in the movie, the equivalent of an adult fart joke. Candice Bergen is the woman who is least comfortable dealing with all of this since she thinks her sex life died with the marriage eighteen years earlier. Since it is a modern story, she gets to monkey around on a dating web site, and she ends up with a couple of fairly charming men, Richard Dreyfuss and Wallace Shawn. Neither of the guys get used to their potential, but the story really is focusing on the women. Diane Keaton gets the best of luck, she gets to date her nephew [Andy Garcia and she were in Godfather III]. There are jokes about body parts, physical infirmity and weight throughout the movie. While they are not always tasteful, they sure as hell are not half as crude as anything in "Deadpool 2". 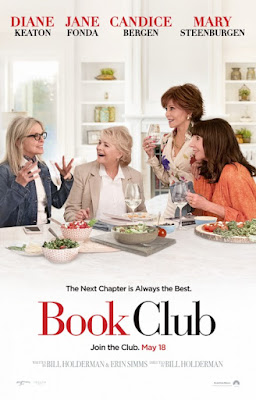 Much like the social comedies of the 30s and 40s, this story is set among the economic elite of the country. Two of the characters are clearly wealthy and the rest are so well set that it never seems as if working is an important part of what they do. At the start of the film they were all given backstory that emphasized their careers but that is almost the last we hear of those jobs except for a few brief scenes at the workplace. The film is a light comedy with just enough drama to off set things so it does not come across as a farce. Don Johnson almost steals every scene from Jane Fonda, which was a little bit of a surprise. Andy Garcia has one bad pick up line but other than that, he oozes charm and glamour, which is just what Diane Keaton needs. Nelson and Steenburgen are the couple that most of the audience is likely to identify with and their arc ends in a cliche, but it is a happy one so what the heck.

If you are under forty, you are not likely to be interested in this movie. If you are over forty, it was made for you and you have to decide whether to follow up on your interest. When I saw the trailer for this back in February [playing with the final Fifty Shades movie} I did not think it looked very promising. It turned out to be a mildly amusing couple of hours with some great actresses who should get a chance to keep working, and this film afforded them that ability. I can't complain about that .
Posted by Richard Kirkham at 7:04 PM