This is over a week late and probably unnecessary. It looks like everyone will have seen this movie by the time anyone gets around to reading my comments, but for what it's worth, I want to be part of the conversation. I spent the last few days trying to catch up on my coverage of the TCM Film Festival, which was also delayed. The reason everything is running late is that I went to a late night screening of "Infinity War" during the Festival and my old butt has been dragging ever since. The advantage of waiting however has been that I got a chance to see it a second time this weekend and there are some more insights I can add as a result.

My impression of the film originally was very positive, but I did not think it would rank near the top of my list of MCU films. The second viewing may change that because it is a better experience than I originally thought. This was a complicated story to put together. There are three or four parallel story lines at any time and each of them involve characters from different MCU films being fitted together. Connecting Iron Man  with Dr. Strange may not be that hard but getting Spider-Man in there and then layering on part of the "Guardians of the Galaxy" is quite an effort. Meanwhile, Thor is in two sequences separate from most of the other cast but he gets connected with the Guardians as well and does end up in Wakanda as part of the story.

The Avengers are split up after the events of "Civil War", but they still have common enemies that they must face down. This is the story that brings them all together, and frankly, it is not an Avengers film per se. This is the story of Thanos, the mad Titan who has a plan to restore balance to the universe. Criticism of MCU villains extends back to the first Iron Man film. No one will be criticizing this movie for villain characterization or story. This movie does show Thanos as an enemy, but much like Kilmonger in "Black Panther",  you can understand and even sympathize with  Thanos and his quest. From his perspective, it is not power or rule that he seeks. Those are simply by-products of the task he has set himself. His iron will is to balance the universe and preserve its' resources and create a paradise. This is also the goal of many environmentalists here on this planet.

While he does have a tendency to lecture and monologue as he carries out his plans, it is done in the context of his story. The Dark Children who follow him and carry out the destruction of civilizations around the galaxy, also have a herald who proclaims their task and laments the sacrifice that those who are destroyed are making. Thanos is a Malthusian on a galactic order. He is Paul Erlich with infinite power. It turns out that Thanos does also have a heart. We may not have expected it, but after this film, his character will be seen less as a monster and rather a tragic force of nature who is willing to break his own heart in order to reach his goal. There are three or four times in the story where another character gives in to him in order to save someone who matters to them. Thanos does not do that when he is faced with the same choice. He makes the sacrifice and we get to see what it does to him.

Josh Brolin may be acting using motion capture and most of the visual element is computer generated, but he still injects the character with facial expressions that are powerful, rueful and ultimately very compelling. He has a great voice and it is used to full effect in this film. Thanos has several scenes with his adopted daughter Gamora, both in the present and the past. It is the success of those scenes that makes his character a tragic villain rather than merely a cartoon evil monster.

Chris Hemsworth as Thor gets the other great meaty part in the film. Having lost so much, Thor finds a way to go on, and his rationalization of how his life story is playing out hives us all a little hope. Interestingly, he is teamed with the most cynical character from the MCU for most of the film. They create an interesting balance between the two of them. When Thor appears at the end of the film, there is hope that Thanos will fail for just a moment. Let's face it however, if you have control of all the Infinity stones, it is going to take something more clever than brute strength and rage to defeat.

As you probably have been lead to expect, there are a number of deaths of super heroes in the story. Some will come as surprises, others may be expected, but the core group of heroes will be back for part two. I suspect there are a large number of seeming deaths that can be reversed in the world of comic book story telling, but some of these deaths seem definitive. You should know that there will be more before this story is completed. 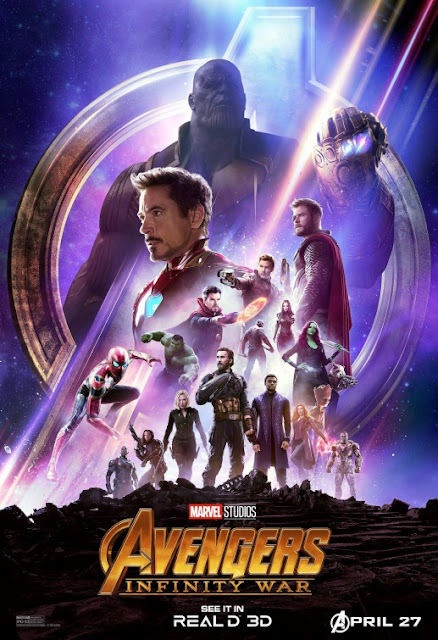 Despite the generally serious tone of the outcome of each sequence, there are moments of pleasure and humor that you will savor for months to come. Spider-man's use of pop culture to solve a problem is great. Bucky and Rocket, battling together in Wakanda may be my favorite shot in the film. It makes me laugh just remembering it. Robert Downey Jr. as Iron Man trading insults and comparing egos with Benedict Cumberbatch's Dr. Stange is also entertaining as hell. Drax and Mantis are amusing in most of their scenes and Chris Pratt continues to show why he should be a movie star. He can play light on his feet and deliver an emotional performance in back to back moments. The Hulk is a surprising source of laughs as well. Even though the tone of the film changes frequently, it still feels as balanced as the universe Thanos wants to create.

As a side note to finish this off, one of the great things about living in Southern California and going to a screening in Hollywood, is that the talent some times drops by. Our screening at the Cinerama Dome was introduced by one half of the directing team of the Russo Brothers, Joe Russo. He was joined by MCU mastermind and producer Kevin Feige. Just a bonus. 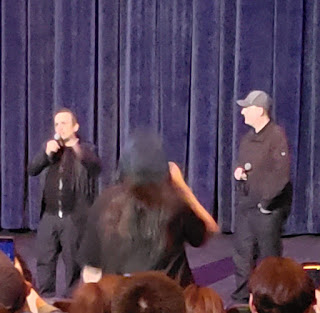 Posted by Richard Kirkham at 2:48 PM