Pirates of the Caribbean: Dead Men Tell No Tales

Well if you were one of those people who had been encouraged by early word that this edition of the Pirates franchise was measurably better than the last one, be prepared to be disappointed. It is just as limp and unmemorable as "On Stranger Tides" but it does have the advantage of having a better title. Being honest with you all, I liked the movie well enough as I was watching it, but it is a nothing burger in the long run. You will not care about or be moved by the characters here in any lasting way. For a couple of hours they will do things in front of you, some of which are amusing but none of which has any bearing on the world.

Johnny Depp was a star before this series started but he became a "superstar" once Captain Jack became his signature role. His return to the role feels very passive. Whereas he was the protagonist in the original film, he has become more and more a secondary character in the subsequent movies. Jack is a passenger as we are on these elaborate voyages. The character does not really initiate any action but rather participates in the elaborate Rube Goldberg sequences of action and comedy. The most memorable visual gag I can recall from seeing the movie this morning concerns the blade of a guillotine, rising and falling towards Jack as the device itself tumbles through space after an explosion. It requires almost no engagement on Depp's part, with the exception of some facial mugging during the sequence.

The story actually concerns two other characters, the son of Will Turner and Elizabeth Swann, and a women who is accused of witchcraft but claims simply to be a scientist. The connection between these characters is accidental at first but as plot threads revel themselves there is little chance that this is all going to tun out to be a coincidence. That is one of the major issues I have in feeling connected to the films after that first endeavor, the characters seem to randomly connect and then bond, betray and reconnect as the script demands rather than what the characters do. Geoffrey Rush's character Captain Barbossa has evolved so much from the antagonist of the first film, to hero of later movies that it makes my head swim. Maybe this is where the precedent for those "Fast and Furious" allegiance shifts came from. This movie is stuffed with secondary characters who are attached to the plot but do nothing to move it forward, and then they are in with the core group and out in the next scene. I just feel like waiting to the end to see what point of view I am supposed to have for anyone.

A second major issue for me are the plot points concerning the sea curses and legends. They always seem to come out of nowhere and are explained quickly without much rhyme or reason. That's because there is another one coming at any minute. The logic of the compass makes no sense at all. It is unimportant until it suddenly is. There is a map that comes out of thin air, requires the magic of a blood moon to be able to see, but that can;t be read until it can be, with the help of a crystal that somehow allows a star map to function. What?, you might ask. Don't bother, in a second,  dead pirate hunters will not be able to exist on soil, then they can possess a body but never come back to their own corpse, until they can. It is all completely arbitrary. 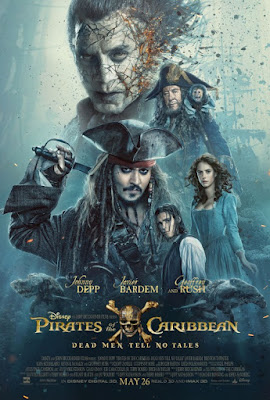 Depp has some funny lines but he frequently is so into the alcohol soaked line delivery that has been selected for him that you don't get their full impact. The elaborate and complicated battle that has Javier Bardem's character chasing Jack from ship to ship using the canons as platforms to jump from and land on, is so darkly lit that you miss some of the fun of the sequence. None of the swordplay has the energy or sense of swashbuckling verve that made pirate movies fun in the first place. Heck, I liked the zombie sharks as much as anyone but here needs to be some byplay and conflict between the characters. Mostly we just get Bardem slathering after Sparrow without much of a plan. It's frustrating when you can see possibilities for a great character driven action movie but the next visual set piece is going to stop it short. If you are a regular reader here, you know I don't give stars or number ratings, I just try to give my feelings after the experience. I did not have any strong feeling about this one way or another. So that will probably tell you that the three above the title stars are a lot more stars than I would give.
Posted by Richard Kirkham at 4:51 PM