Back in 1991, I took my two small children, 3 and 5 at the time, to see "Beauty and the Beast". It was one of my favorite memories of their childhood and my fatherhood. They loved the movie and my oldest was so passionately involved that she cried out to warn Belle and the Beast when the villagers are led by Gaston in an attack on the castle. Three years ago, I saw "Frozen" and I imagined that little girls would love it much as my kids had responded to the '91 film, and it seems they did. My youngest daughter, 26 at the time was unimpressed, and while I thought it was a fine film, it did not have the same impact on me as the early film did. Today I saw a movie that reminded me so much of that late November 1991 experience, I wished I had two small children to share it with. Nostalgia, not being what it once was, leaves me to respond to this movie mostly on my own. "Moana" is great.

I don't think I even saw a teaser for the movie before we went today. I'd listened to a podcast or two where it had been discussed, and since I mostly avoid reading reviews until after I have seen a movie, this was really more surprise than I had anticipated. The look of the animation is marvelous. The characters are designed to accurately depict south sea island people and the characters of "Moana", her father and grandmother but especially "Maui" are spectacularly authentic and beautiful. The opening sequence with Moana as a toddler, being called to the ocean is charming as all get out. Even the animated water tentacle that reminded me so much of the early CGI work in "The Abyss" had personality to it. The island home is lush and the people, songs and way of life are the sorts of things that drab landlubbers are going to dream of when they imagine escaping to a deserted island and retiring to the good life.

There are some of the same patterns of defiance, growth and independence by a young girl that I saw in the story of Belle 25 years ago. There is also a character song like in so many of these films, where the heroine sings of her dreams and obligations and the burden that she feels. So it might seem that the story is conventional Disney Princess territory. I think that's going to be a cliche that gets used anytime a young girl is the featured character in a Disney story and I think it's a little unfair. "Moana" is very different, especially in one of the most important ways. Unlike Ariel, Belle, Mulan, Rapunzel and the rest, there is no love story here. Romance is not part of this equation, unless you count the love that Moana has for her island home and people. This is a very straightforward quest film with high adventure and a lot of humor built in, but there is no subplot about marriage or choosing the one you feel the most for. The writers of the story seem to have drawn heavily from Polynesian mythology, but almost certainly there are the usual Disney variations to keep the story on track and simplify the points being made. I thought it was a unique perspective and made the peoples of the area so interesting to me. There were some similar themes in "Whale Rider" from 2002.

Auli'i Cravalho is a nice discovery as the voice of "Moana". I loved the line readings she gives as she practices the speech she plans on giving to Maui when she tracks him down. The greatest treasure in the film however is the presence of a man who might have at one time been a punchline in the film business, but today stands astride the movie world as a major star and an ambassador of goodwill from film makers everywhere. Dwayne "The Rock" Johnson has charisma oozing out of his whole body, and it fills the screen here, even though he does not appear on the screen and only his voice is used to act his character. The animators do their job to make Maui fun and interesting. He is a bit of a goat to begin with, but a very confident demi-god and able to ignore his own transgression, up to a point. His performance of the Lin-Manuel Miranda song, "You're Welcome", is right up there with "Gaston" and "Prince Ali" as odes to characters that are self inflated and hysterical at the same time. The use of tribal tattoos on his body to tell his backstory and his faults is a brilliant story telling trick that works very well for an animated feature.  It's one of the many things that reminded me of that soon to be live action film, just as the film makers in Beauty and the Beast found a way to make the story sing with the anthropomorphic furniture, the drawing on Maui's body let us know more about the character without having to leave the main plot.

There are at least two very entertaining sequences where Maui and Moana have to work together to overcome adversaries. The Kakamora warrior attack will remind you of every Mad Max film. The chase across the ocean looks like something right out of "Fury Road". While  I was less impressed with the fight against Tamatoa, the jewel encrusted crab monster, it still had a number of clever bits to it and again, it shows the creativity of the film from a number of different points.  There were times in which I felt I was watching something a little more strange than is expected from a Disney film. The Ocean voyage was sometimes reminiscent of a Japanese Anime film. There were some meta jokes about the whole "Princess" concept, and the focus on the two main characters was much more involved than the usual pack of side kicks and comic relief. 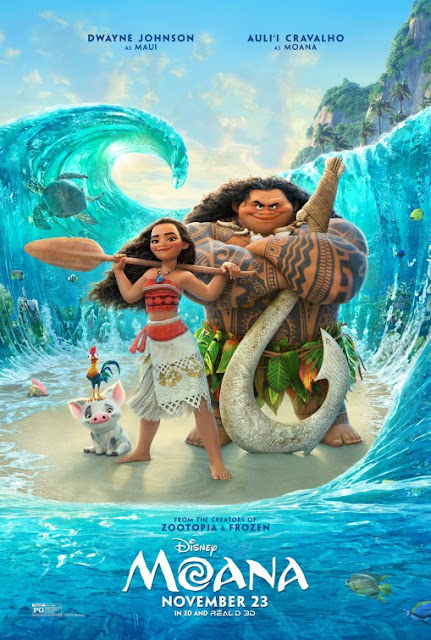 This has been a particularly good year for animated features. For once , Pixar is unlikely to be the favorite at Oscar Time. I might still give the edge to "Kubo and the Two Strings", but "Moana" is a worthy entry and I thought it was very much more fulfilling than even some of the most financially successful animated films this year. If you have kids, take them and make it a special holiday excursion. Get them some popcorn, go Christmas shopping afterwards, and laugh with them over the jokes in this movie. I think you will be making a memory for them which will be something they can treasure decades from now. I wish I had grand kids that I could have taken to see this movie, but if you go because of anything I wrote here, it will be a little bit like I was there, taking you to see it. Merry Christmas memories to you.

Posted by Richard Kirkham at 10:52 PM