WARNING!!! The above trailer is a Red Band, it contains extreme language.

This film is far more accomplished and thoughtful than it has any right to be. You might expect a large serving of teenage angst, served with a side of sexual exploitation and finished off with a dessert of sweet homilies. While it does have some common ancestry with the John Hughes films of the 1980s, "The Edge of Seventeen" has a far more realistic view of life as an adolescent than teen comedies usually manage. It also has a strange relationship that is central to the tone of the movie but not to the plot. The history teacher as confidant is a twisted but honest relationship with an adult that every seventeen year old ought to have. Maybe not with their teacher but with some adult figure in their life.

Hailee Steinfeld is Nadine, a bright, cynical and nice looking junior at her High School. She is however socially awkward and compensates with a bitterness that is only tempered by her life long friendship with Krista, played by another Hayley, Hayley Lu Richardson. When that friendship is threatened, Nadine finds herself at wits end, acting out in ways that she sometimes regrets but also speaking without the restraint that another voice usually provides her. Even in adulthood, a friend can be an influence on our behavior in both positive and negative ways. When the loss of a friendship occurs in the depths of adolescent angst, the consequences are likely to be earth shattering, at least for the kids involved.

Writer/Director Kelly Fremon Craig seems to get the mindset that is a seventeen year old girls. The world is against her one moment, and then incredibly great the next. Nadine is often a figure of sympathy but just as often, she is unpleasant and spiteful. That is the reason that her sparring matches with Woody Harrelson's Mr. Bruner are so inspired. Harrelson is a High School teacher that is not really inspirational like Robin Williams in "Dead Poets Society", or sympathetic like Nick Nolte in "Teachers" (notice how dated my references are? Yeah, I'm old) , instead he is just an average man who has enough life experience to recognize a drama queen and separate it from a future tragedy. Instead of taking her suicide threat seriously and turning her emotional tantrum into an even bigger deal, he counters her with the same biting, sardonic attitude that she exudes. She may not recognize it, but he is a kindred soul who has managed to live life with some satisfaction, in spite of the bitter attitude he owns and can see reflected in Nadine. He has the advantage of having grown up. Not everyone reaches that degree of maturity, and it is Craig's writing that lets us see that Nadine's future does not have to be horrible, all she has to do is look at the guy in front of her.

Because Nadine's story does have a bitter piece of tragedy in it, we are able to understand her anger a little more. That does not excuse the way in which she treats her Mother and Brother. These two characters are also imperfect, but they manage to grow a little in the course of the film. Kyra Sedgwick is Nadine's Mother Mona. She is prickly and self centered and a little desperate. In other words, she is Nadine in thirty years. Blake Jenner is Darian, her perfect older brother. I saw Jenner earlier this year in "Everybody Wants Some!" . His character is not a antagonist, but Nadine wants to make him one. His big emotional scene near the end of the film felt really honest without goingover the top. Another great find in the movie is Hayden Szeto ( what is with all the first names starting with Hay in this movie). He plays a classmate of Nadines, who actually wants a relationship, but for whom Nadine is too blinded by her attitude to take seriously. He was terrific as a quiet kid with a lot more depth to him than anyone would notice, a common character in these kinds of movies but one that is probably as real as any other. 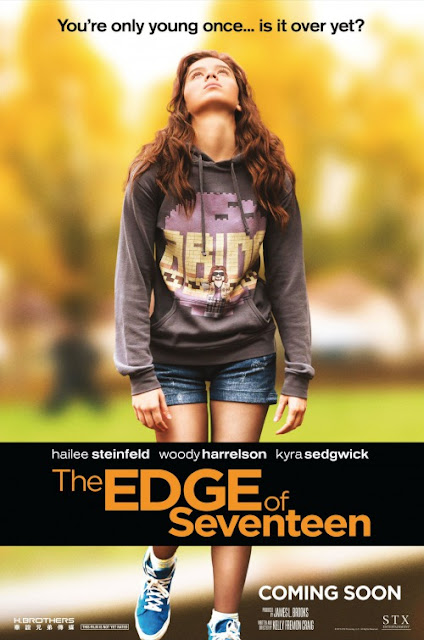 The film does have it's share of laughs but it is closer in tone to "Pretty in Pink" than "Sixteen Candles".  The bittersweet nature of growing up gets mixed with some outrageous moments of dialogue or action. There is a bonus animated sequence in the movie that also provokes both laughter and a sharp jab of honest teen age self righteousness. My daughter has a friend who saw this film and thought she was going in to see a teen comedy, and instead she said she saw a movie about a teenager. That's a very fair assessment of the film. It is ultimately more serious than comedic, but those moments of humor are what help make the characterizations here acceptable. It is a bit strange that one relationship in the film can be managed with a simple text of two letters, but it is a credit to the director, that those two letters are so satisfying. That sort of thing happens a lot in the movie and it is what makes this film special.

Posted by Richard Kirkham at 7:06 AM