This movie is about an inch deep. The conspiracy at the heart of the story is never explored in any depth, the bad guys just kill people to keep things quiet. The shadowy figure giving orders turns out to be the least interesting villain you can imagine, The whole film is one long set up for a final confrontation with the chief thug carrying out the orders to kill. He never has a name, we just know that he is someone equivalent to the hero in training but clearly not in values.

One of my students asked mockingly the other day why Tom Cruise is playing Jack Reacher. He did not think Cruise was intimidating at all. I'm going to disagree. Tom may not be six foot five and built like the Hulk, but as an actor, his has a perfect bad ass expression on his face at the right time, and he can wield his tone of voice around like a six shooter. The answer to my students question was simple, Tom Cruise is Jack Reacher because Tom Cruise is a movie star who can still carry a film on his shoulders single handed.

Maybe you are a fan of the Reacher books and that's what would bring you to this movie. The problem is if only fans of the book turn out, the film won't make any money. Enter Mr. Cruise. This 54 year old can still play well below his actual age and sell it. He is in great shape with an expressive face and the cocky tone of violent superiority in his voice that fits the character to a tea. There are some good moments of improvisational escape, detective work and combat. A few scenes demonstrate his intelligence but people are going to see this because Jack Reacher is going to kill a lot of bad guys and let us enjoy as we watch.

Cobie Smulders is not a damsel in distress like Rosamund Pike in the first film. She is a army Major who can take care of herself, but Jack Reacher doesn't really understand working with others. He is a loner as established by his lack of connection to any location, much less any person. It's tough enough trying to work that kink out but there is another woman in the story as well. Jack feels a sense of Protectiveness towards Sam since she gets involved in the conspiracy as a result of him.  There are a couple of foot chases and car chases in the movie, bit it really feels like a road picture more often than an action film. The action scenes mostly consist of fistfights and gun battles. Director Edward Zwick, has made some good films and this is his second film with Cruise. The film feels like an 80s action film. There are a lot of fights and shootouts but you don't have a huge special effects budget. 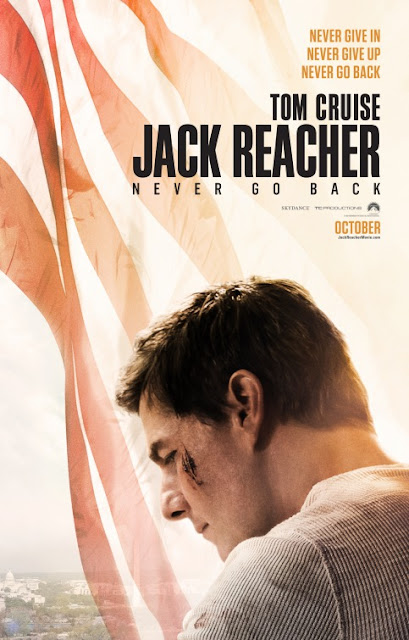 The payoff is the brutal smackdown at the end. The bad guy makes every cliched mistake to piss the lead character off and earn some justice. There is a little blood but most of the conflict plays out like two guys pounding on one another and finally one gets the upper hand. This movie is not going to be remembered as well as the first Jack Reacher film, but I think it will do some business because it is a serious action film with a big star. That is as opposed to an action comedy with lesser stars. Pass the Hot Tamales and buttered popcorn, The more anticipated films of the year are yet to come, but you might as well enjoy this as you are waiting.

Posted by Richard Kirkham at 4:58 PM

I'm seeing this tomorrow simply because I'm in the mood for some light-hearted action. And I do like Cruise so I'm hoping it's fun.

Not much here to make you want to sit up and cheer, but it will kill a couple hours and remind you that Cruise is a star.